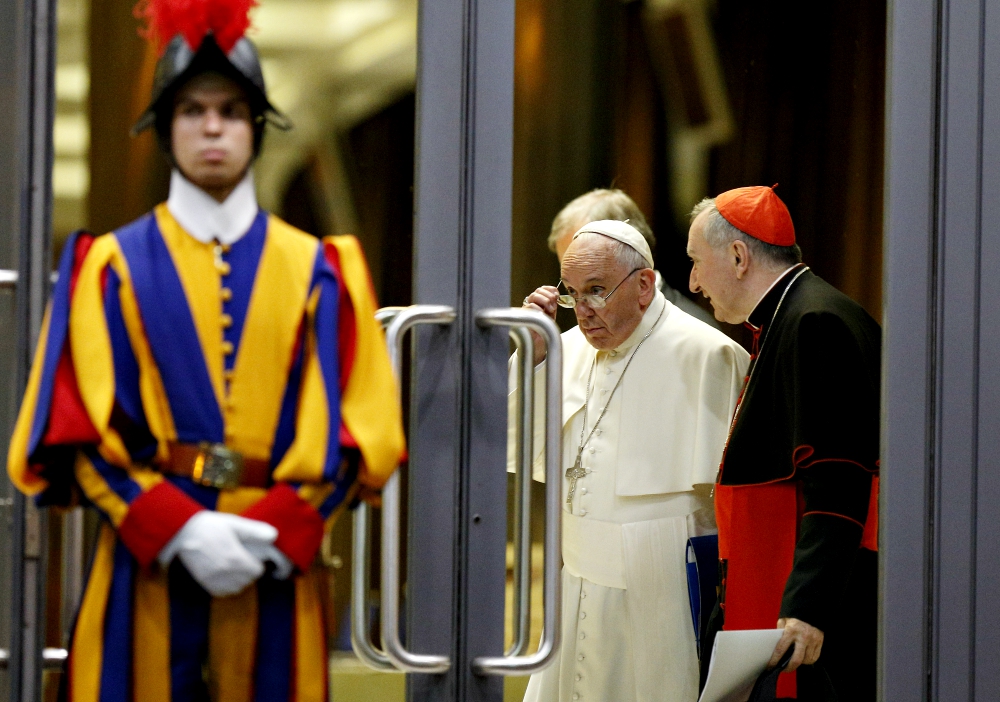 Pope Francis and Cardinal Pietro Parolin, Vatican secretary of state, talk as they leave the opening session of the Synod of Bishops on the family at the Vatican Oct. 5, 2015. (CNS/Paul Haring)

George Weigel's latest offering at First Things, titled "The Catholic Church doesn't do 'paradigm shifts,' " may not be as morally offensive as Fr. Romanus Cessario's defense of Pope Pius IX's kidnapping of Edgardo Mortara, but it is, in its way, just as ridiculous as an intellectual proposition, maybe even more so.

Weigel takes issue with Cardinal Secretary of State Pietro Parolin's observation that Amoris Laetitia represents a paradigm shift in the way the church approaches the subject of family and marriage. Weigel notes that the Scriptures provide evidence of such shifts, as when St. Paul came to realize that salvation was, through Jesus Christ, available to the Gentiles, or the introduction of Greek philosophical referents in the first chapter of the Gospel of John.

"These are matters of divine revelation, however," Weigel writes, "and, as the Church has long believed and taught, revelation ended with the death of the last apostle."

Since that time, according to Weigel, there is development of doctrine but nothing that could be called a paradigm shift.

In the event, Weigel is not Noah Webster, and he does not get to decide what is, and is not, the proper definition of a phrase. He rightly notes that it was Thomas Kuhn who popularized the phrase and did so in the context of scientific revolutions, but the Merriam-Webster definition is not so restrictive: "an important change that happens when the usual way of thinking about or doing something is replaced by a new and different way."

There is a purpose to Weigel's framing the meaning so narrowly, however. He writes of Parolin's choice of metaphor: "Whatever he may have intended, the cardinal cannot have meant that Amoris Laetitia is a 'paradigm shift' in the sense of a radical break with previous Catholic understandings. For the Catholic Church doesn't do 'paradigm shifts' in that sense of the term."

This is nonsense on stilts. If you read Weigel's biography of St. Pope John Paul II, Witness to Hope, what does he describe in the transition from Pope Paul VI to his hero except a paradigm shift? He portrays Paul as indecisive, unequal to the role, but then along comes Papa Wojtyla and shows what it means to be pope. He described the decision to move beyond the tradition of electing only Italians as a "breakthrough" which is a kind of paradigm shift, I suppose.

And the burden of Weigel's book Evangelical Catholicism was to argue for a paradigm shift of sorts in understanding the church's mission: Even if some of Weigel's proposed reforms were silly, like making English the working language of the Vatican, he certainly did not attempt to downplay the shift in perspective he was advocating.

There is also the matter of the Second Vatican Council. How else do you describe the teachings of that council than as a shift of several paradigms? Gone was the idea of the church as a "perfect society" and in its place we have "the people of God." Gone was the idea that error has no rights, an idea that had silenced the greatest theologian America has ever produced, John Courtney Murray, and in its place was Murray's commitment to religious freedom, albeit leavened with the theological anthropology of Yves Congar. Gone were the strictures of Humani Generis, Pope Pius XII's encyclical that led to the silencing of Henri de Lubac, and in its place we have Gaudium et Spes, chock-full of de Lubac's theology. Gone was the stilted Neo-Scholasticism that preceded the council and in its place was the rich, complex ressourcement theology and its multifarious theological flowerings.

Or why not consider the Council of Trent? Was that not a paradigm shift in, say, the training of clerics? In the responsibilities of bishops? In the rights and duties of pastors? 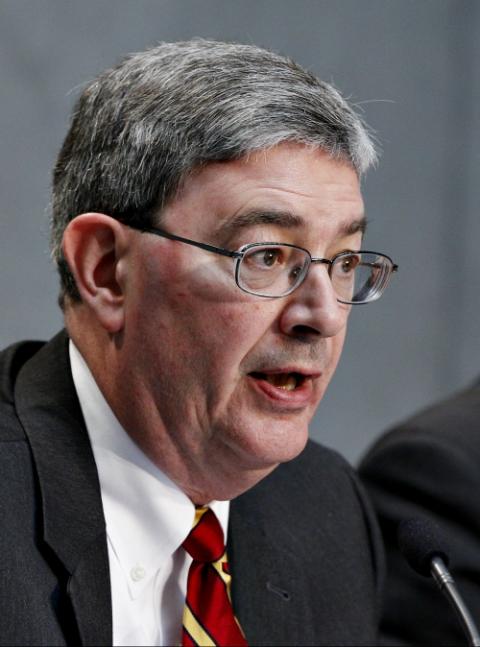 What of the rise of the mendicant orders? A case can be made that the most important changes in the 2,000 years of our church's history were the direct result of St. Francis' kissing a leper. There are the Gregorian reforms of the 11th century. There are the theological achievements of the early councils. All of these changes make Amoris Laetitia look like a piker.

Weigel does discern a paradigm shift in the application of Amoris Laetitia and he is scandalized by it. "The pastoral implementation of Amoris Laetitia mandated in Malta, Germany, and San Diego is quite different than what has been mandated in Poland, Phoenix, Philadelphia, Portsmouth, England, and Edmonton, Alberta," he writes, and he labels this difference "ominous."

Here, I concur with Weigel. It is ominous that the bishops of Poland, Phoenix, Philadelphia, Portsmouth and Edmonton think they can ignore the fact that Pope Francis has placed the interpretation of the document he intends in the Acta Apostolicae Sedis. It is ominous that these bishops, having claimed they were confused by Amoris, now receive an unmistakable and authoritative interpretation, and yet they still dissent. And let's be honest: This is dissent from papal teaching, pure and simple, no different in kind from that offered to Humanae Vitae.

The comparison to Humanae Vitae, I am sure, makes everyone nervous. Conservatives do not relish being compared to those, like Fr. Charles Curran, they have been keen to see removed from seminary faculties. Liberals who love Amoris Laetitia but detest Humanae Vitae can support the exhortation and not the encyclical on other grounds, but on the issue of dissenting from magisterial teaching, they find themselves in the same boat as those who resist Francis. In both cases, the pope developed doctrine in a way that made half the church upset. With this difference: The latter group, by and large, does not consist of bishops who have taken a formal and public vow of obedience to Peter and his successors!

There is a further difference and that is one of history. This year, we will mark the 50th anniversary of Humanae Vitae. In some ways, it reads better every year. Who can doubt that Paul VI was prescient in warning against the moral dangers of neo-Malthusian ethics? Recall this article by the great Melinda Henneberger about the eugenicist practices of certain high-powered Ivy League couples?

But Humanae Vitae undoubtedly furthered a pastoral crisis that likely would have happened anyway, but which was brought to the surface by the rocky reception of the encyclical: The church's teaching became increasingly removed from the lived experience of the faithful. Indeed, mine is the first generation of whom a majority likely did not even think to consult the teaching of the church on such a central aspect of human life and personality.

In some ways, Amoris Laetitia is a response to that pastoral crisis, an effort to come at these issues not by beating people over the head with doctrine they happily ignore, not by idealizing a smaller, purer church of those who follow natural family planning, but by reconnecting with the lived experience of the faithful.

For those, like Weigel, who saw in St. Pope John Paul II the remedy for all the ills of modernity, the fact that the pews were emptying did not bother them, and they overlooked the fact that those pews, even when filled, were not filled with many families with six or more kids. The disconnect between teaching and practice he denounces now was not only fully evident then, it was morally corrosive. It is impossible to understand the cover-up of the clergy sex abuse crisis apart from the fact that bishops had become accustomed to speaking about human sexuality in ways they knew were unreal. Sixteen years have passed since, in the context of that crisis, I penned these words:

There is a reason the Church hierarchy fears honest discussion: It fears it will expose a crisis of belief. There is a pervasive sense within the Church that no one really believes its teachings on sexuality anymore — not the laity, not even the clergy. In a strict hierarchy, no one wants to say the emperor has no clothes. When discussion is not permitted, and honest questions avoided, the Church must assert its teachings on the basis of "authority" alone; and if those teachings do not cohere with the people's lived experience, a regime of hypocrisy and indifference arises that does more to undermine "authority" than any honest discussion possibly could.

Weigel thought that Paul VI's understanding of human ambivalence was problematic and detrimental to the authority of the church, but in fact it was the "how dare you question!" attitude of his hero John Paul II — and of John Paul's acolytes — that truly undermined the authority of the church. John Paul II's idealization of human sexuality — and of priestly life — contributed to his greatest failing, his unwillingness to confront the clergy sex abuse crisis, and it is that crisis, not the fallout from Humanae Vitae, that truly crippled the church in the U.S.

Whatever else Amoris Laetitia achieves and does not achieve — and none of us knows the future — it is a step, a large step, toward honesty and integrity in the life of the church when it comes to our teachings and practice regarding marriage and family life.

Weigel's new column seeks to undermine this achievement because it requires an honest appraisal of the deficiencies of the pontificate of John Paul II, and that is a bridge too far for Weigel. The rest of us can't wait to get across that bridge.

A version of this story appeared in the March 9-22, 2018 print issue under the headline: Church history is full of 'paradigm shifts'.