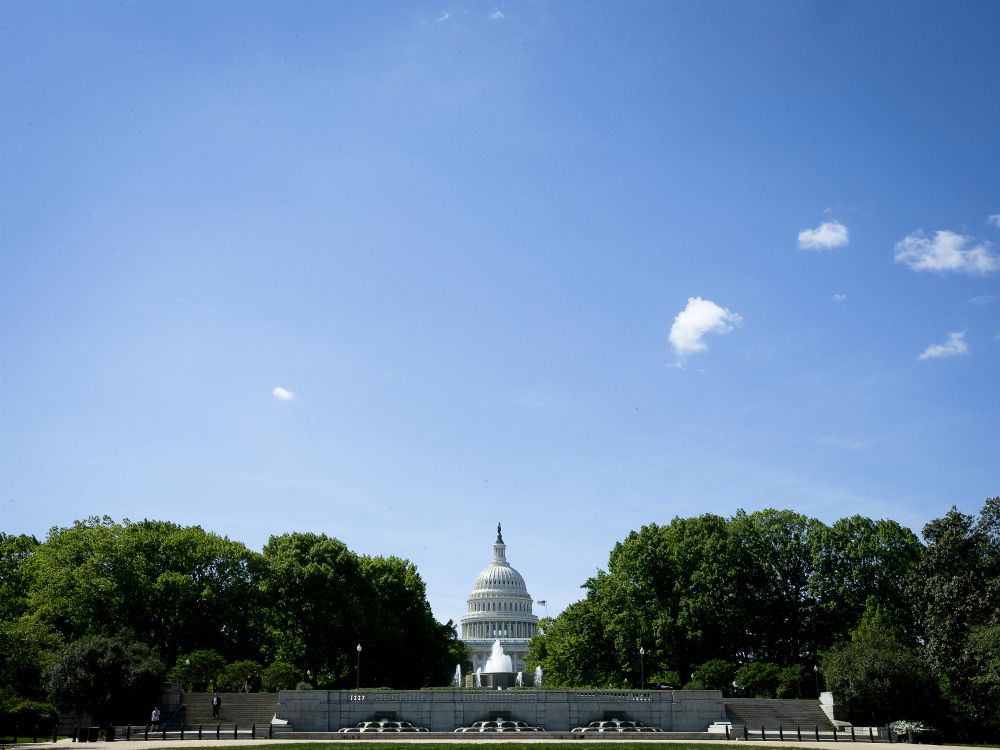 The U.S. Capitol in Washington is seen May 3. (CNS/Tyler Orsburn)

It is difficult to prioritize all the bad things today's Republican Party is doing. Some of these things are very obvious to everyone. The Congressional Republicans are about to enact the most regressive tax reform in the nation's history. They came within one vote of repealing the Affordable Care Act and kicking more than 20 million people off of the health insurance rolls. Look for them to go after entitlement spending next year. The Trump administration has been to the State Department what Kathy Bates was to James Caan in the movie "Misery" — the nation's diplomats have been restricted or hobbled into uselessness. Wednesday, Judge Roy Moore refused to respect the will of the voters and declined to concede the election he had just lost.

Some bad things garner less press coverage but set back efforts to fight poverty around the world. Also on Dec. 13, the House Financial Services Committee voted to repeal Section 1504 of the Dodd-Frank law, the section that required U.S. oil and mining corporations to report how much they give to foreign governments. I wrote about this issue earlier this year. "It's a sad day when basic anti-poverty and transparency initiatives are repealed," said Jubilee USA executive director Eric LeCompte after the vote.

But nothing is so despicable and so dangerous as the recent spate of attacks on Independent Counsel Robert Mueller and the Federal Bureau of Investigation. "I think the public trust in this whole thing is gone," said Rep. Jim Jordan (R-Ohio), one of the founders of the ultra-right wing Freedom Caucus, at a hearing on Wednesday.

Sean Hannity, who is the nightly voice of Trumpism at Fox News, has repeatedly led his show the past week by hurling insults and insinuations at Mueller and his team of investigators. His eyes look like they are going to explode, his anger is so intense. To say that Hannity is despicable is redundant, but this is a new low even for him.

"A witch hunt continues against the president with tremendous bias, no purpose and no end in sight," charged Rep. Matthew Gaetz (R-Florida) last week.

"I think it is a sad day for America when the Federal Bureau of Investigation allows itself to be this corrupt," ranted former House Speaker Newt Gingrich last week on Fox News. "I cannot imagine that any American believes that if the same standard had been applied to Hillary Clinton, that she wouldn't have been found guilty, over and over and over. But it wasn't the same standard, and we now know why. You have members of the FBI who are actively anti-Trump, actively pro-Hillary."

This last is the most morally corrupt because in May, Gingrich tweeted: "Robert Mueller is a superb choice to be special counsel. His reputation is impeccable for honesty and integrity. Media should now calm down."

Of course, they skip over the fact that the threat posed by Russia to our electoral process remains and ought to be investigated. The Washington Post had a front page story about the ongoing threat of Russian hacking yesterday. Do they not see the danger of ignoring that threat?

But I am actually more worried about a different problem. Do they realize how dangerous it is to charge the nation's police with political bias without very clear proof? Do they really want to drag the independence of the FBI into doubt? Do they not realize that the democratic norms and legal precedents that require the Justice Department, and especially the FBI, to be free from the back-and-forth of partisan fighting, those norms and precedents are what separate us from the Wars of the Roses? What's next? Will they call for Mueller, like the Duke of Suffolk, to be beheaded?

You don't have to go back to the 15th century to encounter the ugly precedents for politicizing police forces. Setting aside the obvious 20th-century German examples of the Stasi, and before them, the Gestapo, look at the way the police and military have been used to affect coups. In our own country, there were the revelations of the Church Committee in 1975 which showed the illegal purposes to which U.S. intelligence had been put, from assassinating foreign leaders to keeping tabs on such "dangerous" U.S. citizens as Walter Mondale and Joanne Woodward. We also know that J. Edgar Hoover harbored an obsessive hatred towards the Rev. Martin Luther King Jr. and wiretapped his hotel rooms without cause, although it is King, and not Hoover, whose birthday we celebrate and who has a conspicuous and deserved monument to him on the National Mall.

Most famously, and perhaps most pertinent to the current moment, there is the example of Watergate in which President Richard Nixon systematically used, or attempted to use, the judicial system itself to frustrate the pursuit of justice. The key moment in that ugly unconstitutional and extra-judicial mess was the so-called Saturday Night Massacre when Nixon ordered Attorney General Elliot Richardson to fire special prosecutor Archibald Cox, whose role would be equivalent to that of Mueller today. When Richardson refused, Nixon fired him and asked Deputy Attorney General William Ruckelshaus to fire Cox. He also refused, and Nixon fired him. Finally, the solicitor general, Robert Bork, was brought to the White House, sworn in as acting attorney general, and he fired Cox. It took another 10 months before Nixon resigned, but it was the firing of Cox that led the Republicans of that time to begin to recognize that they had to choose between the president and democracy, and they chose democracy.

We know why these people, like Hannity, Gingrich, Gaetz, Jordan and others, have mounted this campaign: They want to sabotage the investigation because they can sniff, as can we all, that Mueller is getting closer and closer to the president. The evidence is piling up. Gen. Michael Flynn has been flipped.

There has been much to be shocked by in the past year, but this attack on the independence of the investigation is the stuff of infamy. It is the worst we have seen. Unlike the Republicans of the 1970s, these cretins care only about power and care nothing for those democratic norms and judicial practices that separate our civilization from the Star Chamber. Shame on them all.