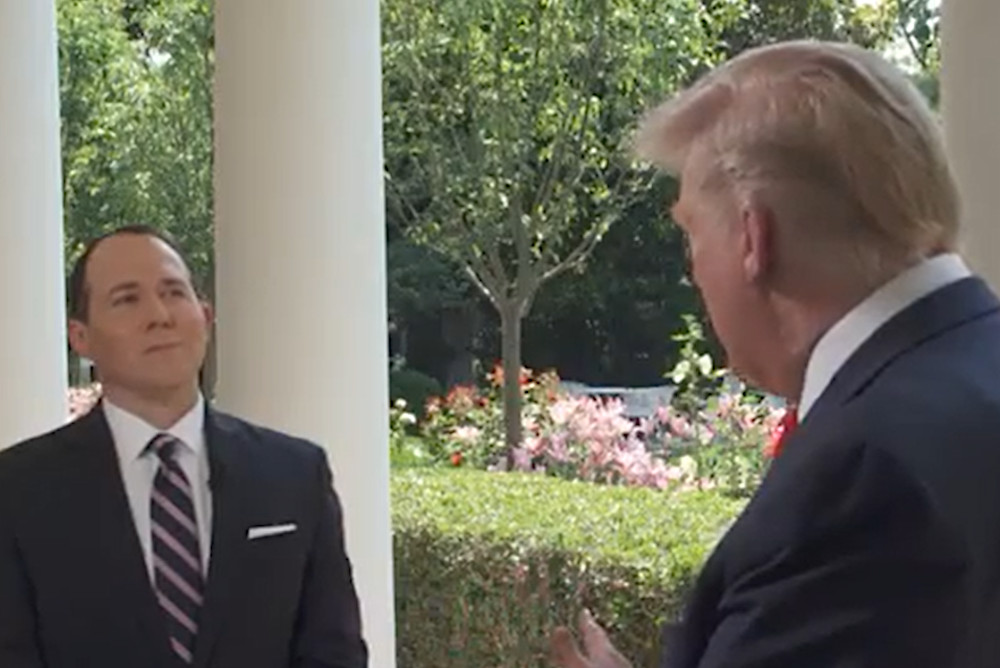 In the Tudor dynasty, a court position emerged that became one of the most coveted of all royal sinecures. It offered unrivaled access to the monarch and required great intimacy. The incumbent needed to balance whatever private or public agendas he might bring to the monarch's attention with his assessment of the monarch's changing moods, as well as the claims and arguments of other, more public advisers. Sycophancy was, of course, the most required of all character traits. Sir Edward Burton, who attended to the monarch's toileting needs, was the first to hold the title of "Groom of the Stool" during the reign of King Henry VII.

This week, EWTN's Raymond Arroyo auditioned for the 21st century, journalistic equivalent of Groom of the Stool, conducting an interview with President Donald Trump that was so obsequious, it would have made Sir Edward Burton blush.

Arroyo asked about Joe Biden's opposition to the death penalty and support for addressing climate change, and said some Catholics and evangelicals say, "therefore, he's pro-life, and you're not. What would your response be?" It is an odd way to frame the question, not emphasizing the consistent ethic of life the church teaches, and how both parties fall short of that ethic. The president began his reply by affirming "I am totally in favor of the death penalty for heinous crimes, that's the way it is. I'm pro-life, he's not." Arroyo sought no clarification.

In responding to a question about the revelations in John Bolton's new book, the president initially forgot one of his talking points, namely, that others who were in the room, and who still work for the president, have disputed Bolton's account. Fear not. Arroyo was quick with a prompt: "And [Mick] Mulvaney came out and said, 'this is fiction,' today." Since when do journalists prompt those they are interviewing?

The most revolting question to my mind had to do with the myth of voter fraud. "Let's talk about these mail-in ballots," Arroyo began. "There are calls across the country. I read where Michigan has already sent in mail-in ballot requests to all their voters. What can you do about this? You believe this will promote or encourage fraud in the election." What? Why not ask how this putative voter fraud is linked to the question of who shot JFK? Maybe the mail-in ballots will be fraudulently sent to someone at the grassy knoll? Needless to say, with a set up like that, the president was off to the races in describing his fancied scenario of the evil consequences of voting by mail. (I confess I worry that Trump and his people might perpetrate limited incidents of voter fraud in November in order to try and tarnish the entire election.)

What good is an interview with the president unless you get to bring up the letter he received from disgraced former nuncio Archbishop Carlo Maria Viganò? Arroyo quoted from the letter, the part in which Viganò rants about a battle between "the children of light and the children of darkness." He asked if "that is an accurate read of where we are." The president called Viganò a "great gentleman" who is "highly respected, as you know." He characterized the letter as "a tremendous letter of support from the Catholic Church." Again, Arroyo did not seek to qualify the president's mischaracterization of the significance of the letter.

Before the interview ended, Arroyo played a long excerpt from the president's rally at Tulsa, ostensibly as a lead in to a question about the lower than expected turnout at the event. The clip featured Trump saying, "Joe Biden and the Democrats want to prosecute Americans for going to church but not for burning a church." One more lie that went unchallenged. 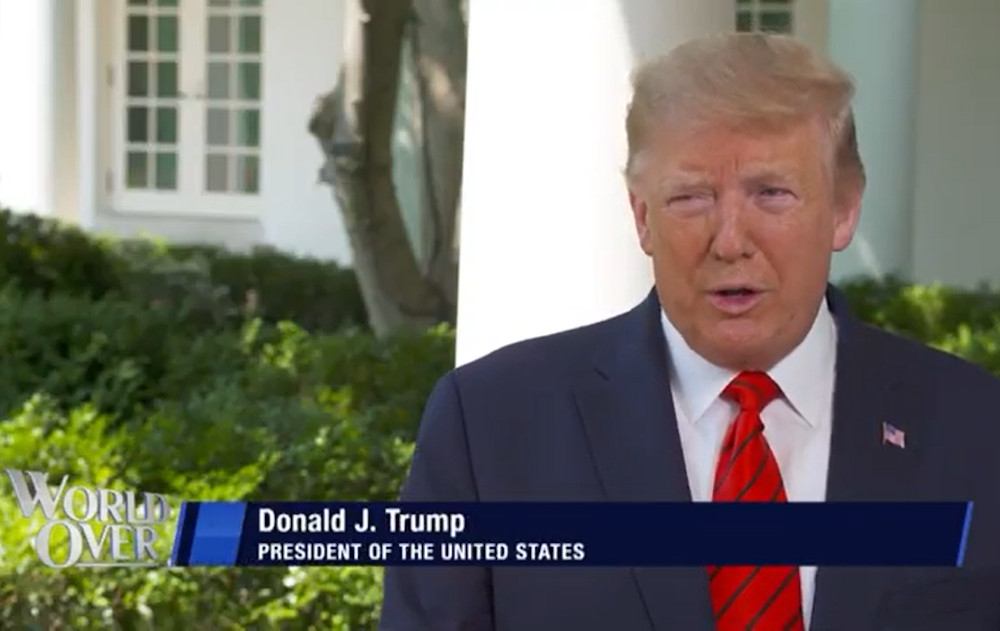 President Donald Trump is interviewed on "The World Over" by ETWN's Raymond Arroyo. (NCR screenshot)

None of this would matter except that EWTN is a primary conduit for information regarding the Catholic faith to millions of Americans. Those viewers may not know that the network has increasingly become a vehicle for Trumpian propaganda that is at odds with Catholic social teaching. They may not know that Viganò is as disgraced as he is unstable, and that it is not in his power to offer any kind of ecclesial endorsement to the president. They may think EWTN speaks for the bishops, the official teachers of the faith.

In their statement "Forming Consciences for Faithful Citizenship," the bishops are quite clear about the nature of Catholic involvement in the political life of the nation:

Unfortunately, politics in our country often can be a contest of powerful interests, partisan attacks, sound bites, and media hype. The Church calls for a different kind of political engagement: one shaped by the moral convictions of well-formed consciences and focused on the dignity of every human being, the pursuit of the common good, and the protection of the weak and the vulnerable. … As citizens, we should be guided more by our moral convictions than by our attachment to a political party or interest group. When necessary, our participation should help transform the party to which we belong; we should not let the party transform us in such a way that we neglect or deny fundamental moral truths or approve intrinsically evil acts.

Pray, tell: How do you square those words with Arroyo's shameful acquiescence to the erroneous claims put forward by the president?

To be sure, many American Catholics, on both right and left, place their partisan loyalties ahead of Catholic moral and social teaching when they enter the voting booth. But those many American Catholics are not lead anchors on a television network that claims to present "trusted Catholic news." Here is where the bishops must recognize in Arroyo no mere man with a poorly formed conscience, but a direct threat to the integrity of the teachings of the church.

It is one thing to witness Catholics vote for a candidate, some of whose views conflict with those of the church and some of which don't, distancing themselves from the points of divergence but making the case that their candidate nonetheless deserves their support. That is what "Faithful Citizenship" counsels and what faithful citizenship, without the capital letters, entails.

In this great free country of ours, Raymond Arroyo and EWTN have every right to do so, but let's be clear: They have become political hacks and have forfeited any claim to Catholic orthodoxy.

It is another thing to see people, over time, start to make excuses for the divergence, insisting that they themselves still uphold the teaching of the church but can understand why a particular candidate does not and they explain away the significance, or introduce extraneous considerations, to minimize the cognitive dissonance. That is sad to see, and it happens on both the left and right.

But the politico-theological complex at EWTN embraces and celebrates the very points on which the president diverges from the church's teachings. In this great free country of ours, Raymond Arroyo and EWTN have every right to do so, but let's be clear: They have become political hacks and have forfeited any claim to Catholic orthodoxy.

Arroyo is the Catholic Groom of the Stool to his monarch, no longer a journalist, only a sycophant and a cheerleader. It is pitiful, to be sure, but it is also dangerous. It is past time for the bishops to attend to the danger.