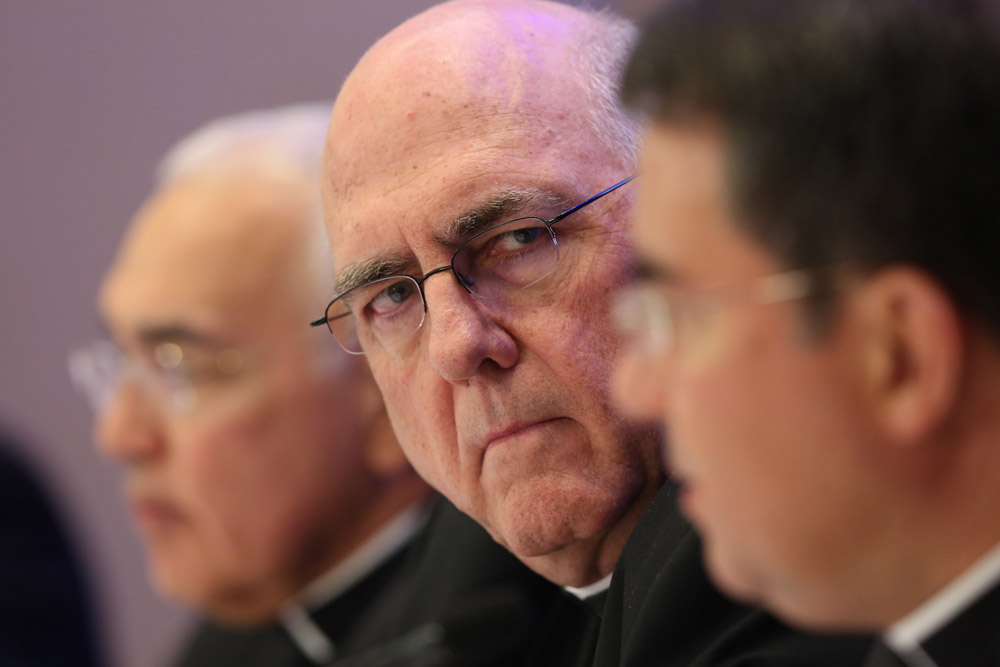 Archbishop Joseph Naumann of Kansas City, Kansas, looks on as Bishop Oscar Cantu of Las Cruces, New Mexico, chairman of the U.S. bishops' International Policy Committee, responds to a reporter's question during a Nov. 13 news conference at the fall general assembly of the U.S. Conference of Catholic Bishops in Baltimore. (CNS/Bob Roller)

The U.S. bishops broke tradition this morning selecting Archbishop Joseph Naumann of Kansas City, Kansas, to serve as chairman of the Pro-Life Activities Committee. He defeated Cardinal Blase Cupich of Chicago on a vote of 96 to 82. Not to put too fine a point on it, but this amounted to the bishops giving the middle finger to Pope Francis.

The Pro-Life Activities Committee has always been led by a cardinal, a way the bishops have signaled the priority they assign to that committee. The current chair is Cardinal Timothy Dolan who, like Naumann, is a protégé of Cardinal Justin Rigali. Some of us who have been watching the bishops for a long time from the bleachers on the left have a saying about Rigali's career: "He has ruined everything he ever touched." In giving his committee report on Monday, Dolan singled out Naumann for praise. It was a none too subtle placing of his finger on the scales.

The contrast between the two candidates for chair of the Pro-Life Activities Committee was the starkest of the choices the bishops faced. Naumann and Cupich are both representative of the two divergent understandings of how the church should interact with the ambient culture. Naumann is a culture warrior. Cupich champions engagement and dialogue.

In 2008, Naumann told Gov. Kathleen Sebelius that she should not present herself for Communion because of her pro-choice position. This interpretation of Canon 915 was first advanced by Cardinal Raymond Burke but it was never the position adopted by most bishops who thought it a mistake to politicize the Communion rail. Naumann also ordered his parishes to cease hosting Girl Scout troops over concerns they were somehow involved with Planned Parenthood. He is not exactly a poster child for the culture of encounter.

Cupich, on the other hand, has openly embraced the consistent ethic of life approach first introduced by his predecessor Cardinal Joseph Bernardin. Many of the zelanti in the pro-life movement deeply resented Bernardin's effort, wanting a singular focus on abortion. I recall an auxiliary bishop telling me that after he gave a talk that advocated the consistent ethic of life, his ordinary called him and told him, "We don't use that language here."

Underneath the issue of how to approach pro-life issues was a deeper issue: How do the bishops feel about Pope Francis? Cupich was plucked out of the relatively small diocese of Spokane by Francis and sent to Chicago, his first major appointment in the U.S. hierarchy. Francis also named Cupich to the Congregation for Bishops which vets candidates for the episcopacy and, consequently, is charged with shaping the next generation of leaders in the church.

I do not discern any similar stark choice among the other candidates. In the contest for conference secretary, which brings membership in the executive committee, Archbishop Paul Coakley of Oklahoma City lost to Detroit Archbishop Allen Vigneron by a vote of 88 to 96. Vigneron's selection takes effect immediately.

The Committee on Doctrine will be led by Bishop Kevin Rhoades of Fort Wayne-South Bend, Indiana, who garnered 110 votes to the 95 votes cast for Bishop Daniel Thomas of Toledo, Ohio. The race for chair of the Communications Committee pitted Bishop John Barres of Rockville Centre, New York, against Bishop Michael Burbidge of Arlington, Virginia: Burbidge won with 116 votes to Barres' 70 votes. The National Collections Committee contest was won by Bishop Joseph Cistone of Saginaw, Michigan, over Archbishop Michael Jackels of Dubuque, Iowa. The vote was 124 to 65. The Committee on Cultural Diversity saw Bishop Nelson Perez of Cleveland facing off against Bishop Shelton Fabre of Houma-Thibodaux, Louisiana, and Perez won on a vote of 107 to 77. All of these elected will serve as chair-elect for one year and take over the chairmanship next year.

At their June meeting the bishops voted to make their Ad Hoc Committee on Religious Liberty a standing committee. They elected Archbishop Joseph Kurtz of Louisville, Kentucky, the immediate past president of the conference, to serve as the first chair of the permanent committee. He defeated Archbishop Jerome Listecki of Milwaukee by a vote of 113 to 86. Kurtz will assume leadership of the committee immediately.