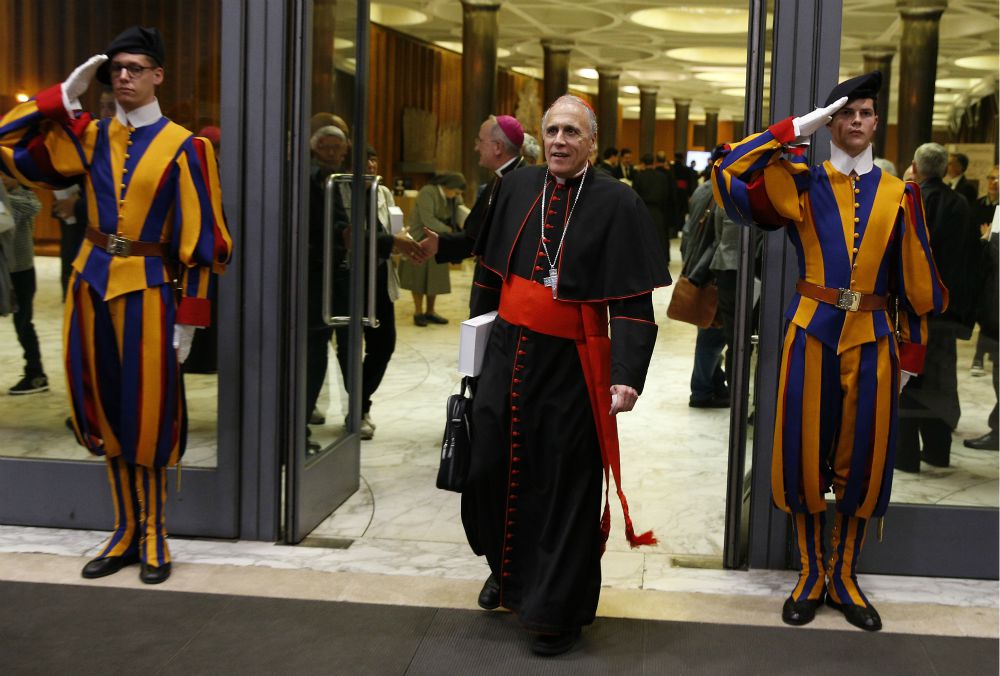 Swiss Guards salute as Cardinal Daniel DiNardo of Galveston-Houston, president of the U.S. Conference of Catholic Bishops, leaves an encounter marking the 25th anniversary of the Catechism of the Catholic Church at the Vatican Oct. 11. Addressing the encounter, Pope Francis said that the death penalty is "contrary to the Gospel." (CNS/Paul Haring)

The press release announcing the agenda for the upcoming meeting of the United States Conference of Catholic Bishops was pretty sad. The agenda is thin. The release notes that the bishops will vote on a new translation for the Order of Baptism of Children, that there will be a report from several committees, and some votes for committee chairs.

It must cost several hundreds of thousands of dollars to fly the nation's bishops to Baltimore, put them up at a pricey hotel for four or five nights, provide meals and transportation. Why spend all that money for an agenda that is this meager?

It is not as if we lack a pope who has invited all of us in the Catholic Church, bishops included, to think about what it means to evangelize. A pope who has called the entire world, including the bishops, to confront the urgent challenge posed by climate change. A pope who has asked the church to drink anew from the wellsprings of its social doctrine, especially on the ways massive income inequality is the root of social evil and how the idolatry of money condemns millions to poverty and corrupts those whose affluence deadens them to the Gospel. A pope who is committed to inculturation of the Gospel, as evidenced by Magnum Principium, the document issued by Francis' own initiative that returns authority over liturgical translations to bishops' conferences.

The day Magnum Principium was issued, I remarked to a friend: "This directive from the Holy See presumes that the bishops' conferences are even capable of having the kinds of discussions needed to bring about an effective translation, and I am not at all sure our bishops' conference still has that capacity." I remember the days when Archbishops Daniel Pilarczyk, Oscar Lipscomb, Rembert Weakland and Bishop Donald Trautman would discuss these issues posed by liturgical translations, drawing on years of scholarship and learning. Today, some bishops think if they can quote the latest issue of First Things it makes them an intellectual. The issue is not simply that there has been a decline in the intellectual heft of the episcopal bench, although there has been, it is that the bishops no longer seek a common ground based on real theological principles. Instead, too many cling to ideological ideas of questionable theological weight. The bishops will stand united, because they put a premium on that, even when what they are standing on is theologically shaky. Consider the distortions to which the church's teaching on religious liberty and cooperation with evil have been put in recent years.

What the bishops' conference no longer does is forge a genuine, unified position, as they did when they wrote the peace pastoral or the economic pastoral in the 1980s. At that time, they did not all start on the same page, but they listened to each other, argued with each other, recognized that some theological arguments were stronger than others, overcame whatever cultural and political biases they had and reached conclusions that were not only shared but challenging. The bishops as a body are no longer capable or, if capable, inclined, to undertake that kind of effort again, not even where it is most needed, such as developing a common approach to the application of Amoris Laetitia. That magisterial document is also not on the agenda for this year's meeting.

It has been two and one-half years since Pope Francis issued "Laudato Si', on Care of Our Common Home," his social encyclical on caring for creation. Have the bishops discussed catechetical tools for offering the people entrusted to their care instruction on this issue? Have they mounted any public education efforts? Have they discussed what they can do, not only as the principal teachers of the faith, but as significant property owners, to convert their own plants to more sustainable energy systems, compared best practices, invited experts to address them about legislative and regulatory means to address this pressing problem? Nothing.

The Republicans in Congress and the Trump administration are busy trying to pass a tax overhaul that will vastly increase income inequality in this country. Bishop Frank Dewane, chairman of the Committee on Domestic Justice and Human Development, sent a letter to all members of Congress last week, calling for attention to the poor in any changes to the tax law. It was not bad, but it surely did not read like one of Francis' talks on the economy. I am glad the bishops continue to prioritize the poor in assessing legislation — how could they do otherwise? But income inequality is eating away at the fiber of our society, and this gets only a passing mention. Bishop Dewane wrote, "National tax policy is complex, and its effects far-reaching." It's not that complex. The GOP tax plan, in all of its iterations, will make the filthy rich even richer and make our nation's economy even less responsive to the demands of justice. Where is the outrage?

In the wake of the massive devastation caused by Hurricane Maria, many bishops have sent checks to the church on the island. Before the storm, the bishops conference had been magnificent in helping to get Congress to approve legislation that set Puerto Rico on course to deal with its debt crisis. But waterborne diseases have begun to break out on the island, diseases that are curable. Many people, especially in the rural, mountainous regions, still lack access to potable water and to electricity. Where is the outrage?

Our country is now led by a president who, whenever he is tanking in the polls, runs to immigrant-bashing and coddling white nationalists as the surest ways to connect with his base. The bishops have issued letters and statements and established a new task force. Dr. King went to jail in his search for justice. Our bishops have been outspoken in their defense of immigrants, but what else are they willing to do to confront the anti-immigrant bigotry that now receives regular blessings — and executive orders — from the White House? I am not a fan of denying any politician Communion on account of their political stances, but if you thought John Kerry should be denied Communion because he was unwilling to defend the unborn, why is no one talking about denying Communion to Speaker Paul Ryan because of his unwillingness to defend the undocumented? I understand the political, if not the moral, rationale that requires Republican legislators not to stand up to a president of their own party, but the bishops operate under no such constraint. They do not have to worry about Steve Bannon sending a primary challenger their way. Where is the outrage? 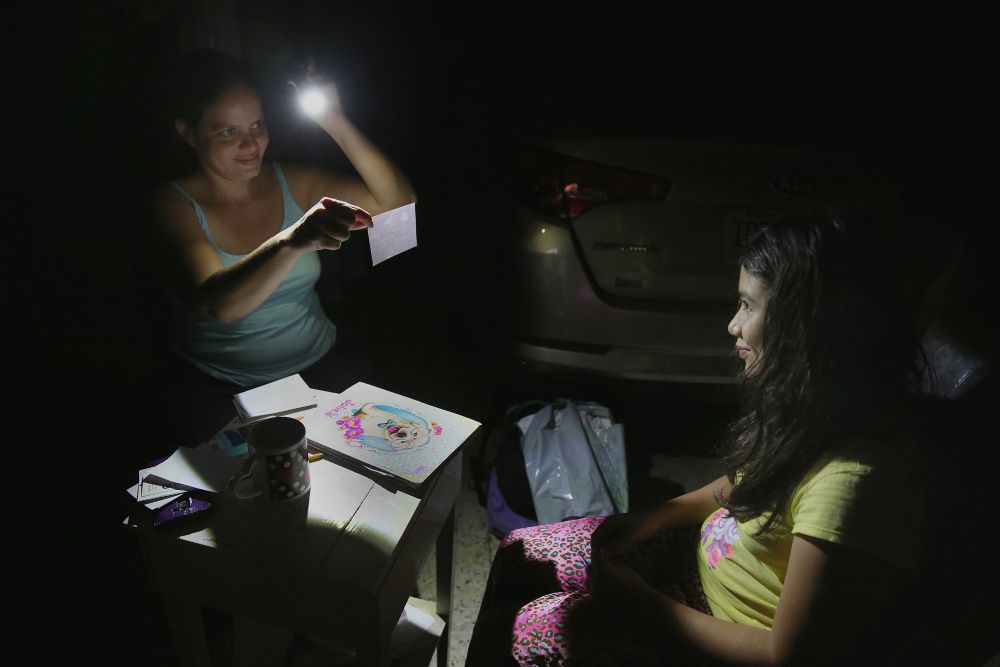 Margarita Rodriguez holds a flashlight as she quizzes her 11-year-old daughter, Isel Martinez, about homework outside their home in San Juan, Puerto Rico, Oct. 25. Most of Puerto Rico has been without power and water for more than one month after Hurricane Maria devastated the island. (CNS/Bob Roller)

During the rise of totalitarian regimes in the 1930s, the Holy See became more inclined to see the value of democracy and encouraged the U.S. bishops to make sure young Catholics were instructed in both the faith and in an appreciation for democratic norms. The bishops responded by launching the "Treasure Chest" comic book series. The 1940s and '50s were a time when comic books were what social media is today, a critical means for communicating with young people. The bishops' comic books tackled real issues, like racism, and committed the vast educational apparatus of the church to educating children in both the specifics of the U.S. Constitution and the more amorphous but equally vital commitment to democratic values. We have a president who regularly denounces or distorts or demeans or dismisses those values and the norms that enflesh them. Where is the outrage?

At their June meeting, which had a similarly boring agenda, a group of bishops insisted on addressing the health care issue. First Bishop George Thomas, followed by Cardinal Joe Tobin, then Cardinal Blase Cupich, all went to the microphone and addressed the moral enormity that Congress was then considering a plan that would have thrown some 23 million Americans off the health insurance rolls. The statements from the bishops' conference after that meeting became stronger, and those within the conference who were not upset by the efforts to repeal Obamacare were forced to take a more forceful stance. Perhaps this forthcoming meeting will witness a similar drama. Maybe someone will point out that in last year's election white Catholics supported Donald Trump, and still do, and that this fact serves as a precise measure of the degree to which our bishops have failed to provide their flocks with an adequate moral education.

Francis and Trump are like two poles, and not just on this issue or that, but on what counts as important in civic life, what values should be encouraged and which shunned, what is the end of politics and how morals should shape the economy. Strangely, many bishops are closer to Trump than to the pope on such foundational considerations. And what is more, there is no appetite among the bishops as a body to really engage the ecclesial soul-searching that Francis calls for in virtually every other sermon.

The bishops' conference was begun 100 years ago to face the crisis posed by the U.S. entering the First World War. Today, our nation faces a different moral challenge, but one that is far more existentially threatening: the Trump presidency. The bishops do not need to cobble together a new organization: The organization is in place. Will the bishops rise to the occasion?