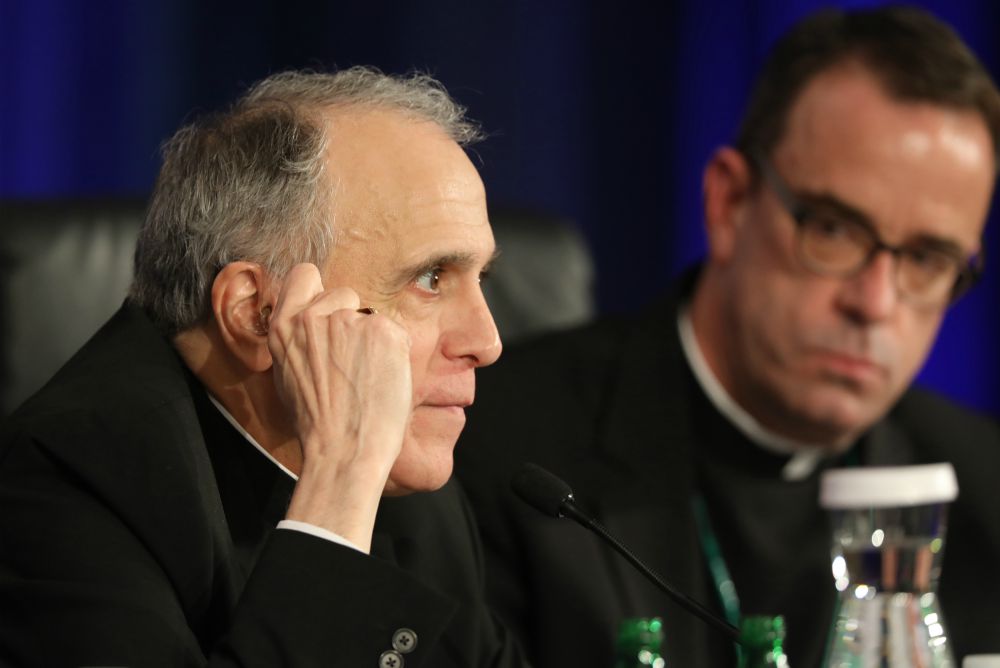 Cardinal Daniel DiNardo of Galveston-Houston, president of the U.S. Conference of Catholic Bishops, looks on at the conclusion of the second day of the spring general assembly of the USCCB in Baltimore June 12, next to Msgr. J. Brian Bransfield, general secretary. (CNS/Bob Roller)

I have a modest proposal for the U.S. bishops' conference. They should scrap their entire agenda for the upcoming November plenary and address a single question: To what degree are the seeds of a de facto schism being sown within the U.S. church?

Last week, a friend called my attention to a website called "Faithful Shepherds" that was launched a year ago by LifeSiteNews. They state that their purpose is to provide a "one-stop database" about where Catholic bishops stand on certain issues and to "encourage bishops to be faithful to Christ."

The website considers a range of issue, including homosexuality and liturgy: "Does your bishop encourage Communion on the tongue while kneeling?" is one of the questions posed. I was glad to see that they properly labeled one category "abortion politics," although they failed to see that certainty about politics is different from certainty about morality. The weirdest item on the list is Archbishop Carlo Maria Viganò's testimony about which they ask "Has the bishop supported an investigation into Viganò's claims? Does the bishop say his allegations are driven by ideology or are an attack on Pope Franics [sic]? Has the bishop said Viganò is a man of integrity?" It is odd, is it not, that fidelity to Viganò has become such a calling card among these schismatics. His screeds are so obviously a combination of score settling, innuendo and simple smearing — if you knew nothing about Viganò and nothing about the people he names and only read the texts as they are, you would be suspicious of the author.

When you find out where your bishop stands on these issues, you can click on a button to send him a postcard, thanking him for supporting the positions LifeSiteNews endorses or asking him to abandon his wayward ways. First, you are invited to make a donation of $5 or more, and then alerted that your credit card will be charged $2 for the postcard. You can also "do-it-yourself," as they provide an email address and phone number for each prelate as well.

"For too long, lay Catholics have been without an authoritative accountability tool for U.S. bishops, especially those who deviate from the Church's magisterium," they write. Seeing as Francis is now the embodiment of the church's magisterium, the fact that they applaud bishops who have criticized Amoris Laetitia and denounce those who have supported it is a bit rich.

Last week, Cardinal Blase Cupich was their featured prelate. I won't bore you with the bizarre way they frame different items on their list of complaints. Many are tendentious in the extreme. Others are true, but in this funhouse of extremism, what is sane is presented as heretical and what is a commonplace is considered an outrage.

I do not believe that any bishop, not even the bishop of Rome, is beyond criticism. But what makes this Faithful Shepherds website so nefarious, and indeed what makes LifeSiteNews and other conservative outlets so nefarious these days, is that fidelity is defined as being in opposition to the pope. They do not cite a single instance in which agreement with the pope is a mark of fidelity. Silly me. All these years, I thought being in communion with the successor of Peter was a significant mark of Roman Catholicism.

You can find even more outrageous claims on the Catholic right, and it is especially delicious when they attack one another for being insufficiently extreme. This essay at the blog Novus Ordo Watch criticizes the far right newspaper The Remnant because the latter had questioned sedevacantism, the idea that modernists conspired in 1958 to elect an illegitimate pope and the real pope is in hiding somewhere. This group is in formal schism, and they represent a sliver of the population.

Sometimes, the sources of schismatic thinking are more widespread and cross into more mainstream media avenues. As my colleague Heidi Schlumpf reported, Taylor Marshall's book Infiltration: The Plot to Destroy the Church from Within argues that Masons conspired successfully to get Cardinal Jorge Maria Bergoglio elected pope in 2013. Kooky, yes, but it was published by Sophia Press, which is an arm of EWTN, and it made it to #1 in several Amazon categories including Christian Church History.

Any of the bishops on the list can contact me if they wish to publicly denounce this insidious effort and its shoddy theology.

The Faithful Shepherds website does not only include bishops LifeSteNews derides. It also includes many bishops they applaud. Of course, Cardinal Raymond Burke gets nothing but plaudits. They also lavish praise on Cardinal Daniel DiNardo, the archbishop of Galveston-Houston, and on Bishop Thomas Paprocki of Springfield, Illinois, Bishop Thomas Olmsted of Phoenix, Arizona, Bishop Michael Burbidge of Arlington, Virginia, and many others. Do these bishops approve of LifeSiteNews' method of dividing the hierarchy? Do they agree that opposition to Francis is a mark of fidelity? Will they publicly disassociate themselves from this project? Any of the bishops on the list can contact me if they wish to publicly denounce this insidious effort and its shoddy theology.

I recall a bishop telling me about an ad limina visit during the pontificate of Pope St. John Paul II. During a meeting with then-Cardinal Joseph Ratzinger, a bishop commented upon efforts to divide the hierarchy by labeling some bishops orthodox and other heterodox. Ratzinger replied that all the bishops were orthodox. Criticism of bishops — even amongst themselves — should never entail questioning each other's fidelity to the Gospel. It is possible to disagree with one another and still be Catholic. The LifeSiteNews project does not recognize the difference.

LifeSiteNews also recently featured an interview with Janet Smith, who has apparently stepped down from her teaching position at Sacred Heart Major Seminary in Detroit. My colleague Peter Feuerherd has already written about the degree to which that seminary is a hotbed of anti-Francis criticism from its professors, a scandal that warrants attention. But watch the Smith interview, and go to minute 10:08 and see how she responds to a question about Francis. At 29:53, the interviewer, LifeSiteNews editor John-Henry Westin brings Judas Iscariot into the discussion, and they both agree that the story is a consolation today, given the corrupt bishops of our time. Judas?

I confess I am not sure what the hierarchy should do about groups like LifeSiteNews and Church Militant. I do not think ignoring them works. They are well-funded and well organized. Church Militant now operates out of impressive-looking studios. Changes in technology allow these groups to spread their divisiveness, so the seeds of schism might sprout more quickly and more comprehensively than before.

I do know this: It is difficult to see how any other issue is more clamant upon the bishops' attention. My fear is that there is a significant minority of bishops who agree with some of the LifeSiteNews craziness. Unity within our church, however, is not founded on any ideology, liberal or conservative. The Petrine ministry exists to serve the unity of the church. It would be impossible to imagine any ecclesial unity founded on opposition to Peter. This autumn, when the U.S. bishops begin their ad limina visits to the Vatican and as they plan their plenary meeting in Baltimore, they need to start forging a response that is pastoral but decisive.