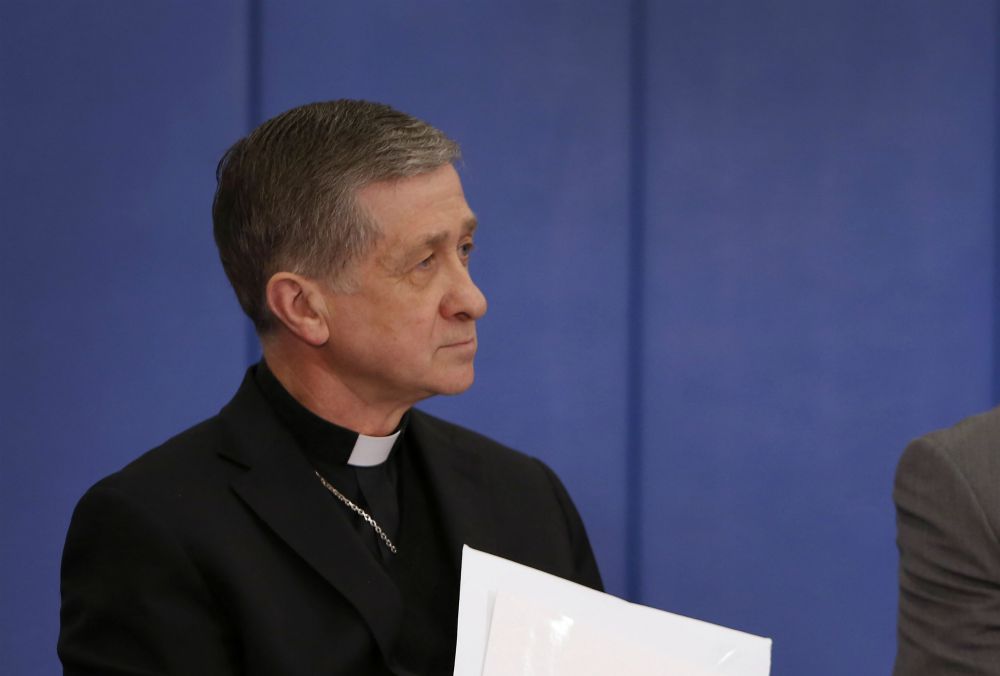 Last week, Cardinal Blase Cupich of Chicago participated in a conversation with journalist E.J. Dionne at the University of Chicago's Institute for Politics. The entire exchange was riveting, and I will deal with some of the things Cupich said presently. You can see the video here.

But, if you go to minute 24, you see the most important thing that Cupich said. Dionne began by asking about the controversy surrounding Fr. Tom Weinandy's letter to Pope Francis, in which the former director of the bishops' doctrinal committee suggested that the faithful were scandalized by Pope Francis. Cupich replied: "I don't think that people are scandalized by the pope. I think they are being told to be scandalized. I think there is a difference." To use a Catholic word: Bingo!

I have complained about the thin agenda for this week's U.S. bishops' conference meeting. Here is something they need to discuss: How is it that people, who are in some sense on the bishops' payroll or working at organizations with clear links to the church, are leading such a noisy opposition to Pope Francis and seem perfectly willing to break down the unity of the church in voicing that opposition?

The bishops know that EWTN and the National Catholic Register both regularly highlight any and all news stories about resistance to the pope. It seems that, some weeks, if Cardinal Raymond Burke sneezes, Edward Pentin has to write a story about it — and always the same story: It was a truly orthodox sneeze, conformed to the unchangeable and irreformable intrinsic nature of a sneeze, a sneeze worthy of St. John Paul II. Yet there is Bishop Robert Barron doing ads for the Register and saying it presents "the Catholic perspective" — not "a Catholic perspective" but the Catholic perspective. Does the good bishop read it?

In years past, the bishops would look into "problems" if LifeSiteNews or the American Life League accused someone, somewhere, of not upholding their interpretation of a Catholic's civic obligations. Remember the review of the Catholic Campaign for Human Development? Why was that necessary? Remember the kerfuffle over Catholic Relief Services? And the perpetual campaign against Catholic Charities? Will the bishops now concede that groups like LifeSiteNews and the American Life League and the Lepanto Institute can — and should — be ignored? That perhaps it might even behoove the bishops to make clear that these organizations do not speak for the Catholic Church.

Another thing Cupich said in the discussion is worth repeating. When discussing why some people are upset about Francis, Cupich said: "He's calling people to have an adult spirituality, rather than being infantilized in their spirituality." He noted that people who like telling other people what to do have trouble with the sense of responsibility to which Francis is calling us all.

The codification of ecclesial practice and norms was a leitmotif of the pontificate of St. Pope John Paul II: He authorized the catechism, he updated the universal code of canon law, he issued a compendium of the church's social doctrine. There is always a need for such codification: No society exists without laws and rules. But, that codification is there to serve the church's essential mission of proclaiming Jesus Christ, our risen savior; it is not there for its own sake. As St. Paul wrote to Timothy, "the Word of God is not imprisoned."

As Pope Francis likes to say, "The Word still wants to take on flesh." Rules and codes can imprison the Spirit if they replace the kerygma as the central focus of ecclesial life. The Lord said to Nicodemus, "The wind blows where it wishes, and you hear the sound of it but do not know where it comes from and where it is going; so is everyone who is born of the Spirit." That is not a vision of certainty or even clarity, and some people crave certainty and clarity.

One of the most constant refrains among the complaints against Pope Francis is that he sows confusion. Only if you have placed law or ideology at the heart of ecclesial life is his approach to governing the church confusing. He is calling to maturity. He calls for discernment, not libertinism, and discernment is always done with and within the church.

As Jesuit Fr. Jim Martin pointed out in responding to the Weinandy's strange account of how he came to the conclusion that Jesus wanted him to write to the pope: "If one's idea of discernment is seeking signs like this, then why would one trust, say, a divorced and remarried Catholic to consult his or her conscience about whether it is permissible to receive Communion? It is no wonder that discernment seems so arbitrary to some people. And so frightening."

Cardinal Cupich's conversation with Dionne contained other gems, such as his criticism of libertarianism. Dionne joked that the press had their headline: Cupich criticizes libertarianism at University of Chicago! His comments about abortion were very strong, which is always a bit of a risk in a secular venue. I encourage everyone to watch this video. Cupich is, par excellence, a bishop for the era of Francis: engaged, sympathetic, compelling. If only the rest of the body of bishops would follow his lead.