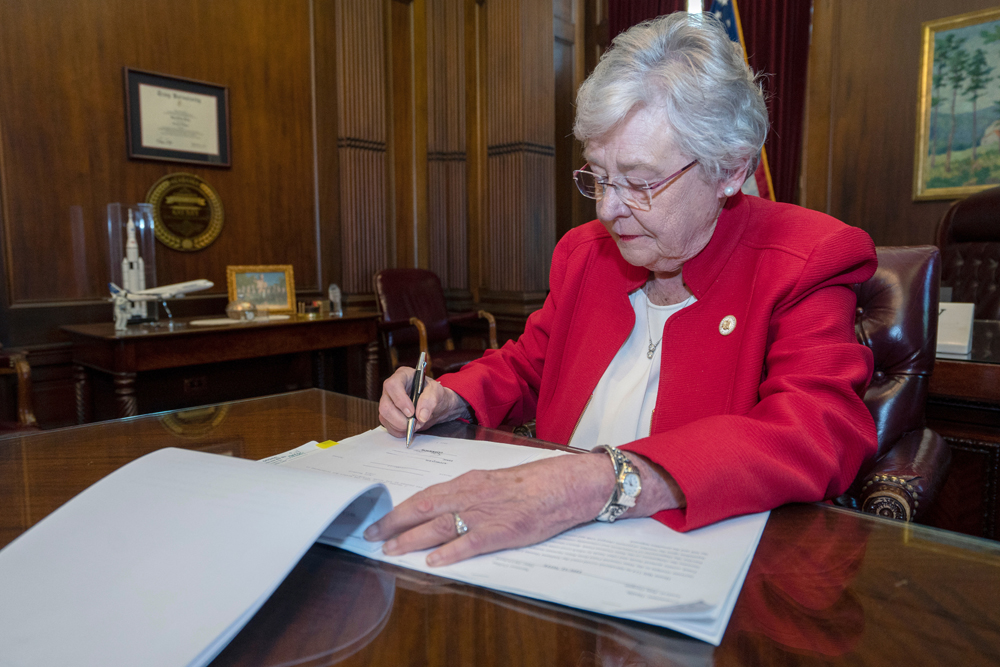 Alabama Gov. Kay Ivey signs into law a bill to ban abortion in nearly all cases, May 15 at the state Capitol in Montgomery. (CNS/Office of the Governor State of Alabama handout via Reuters)

Democracy depends on compromise, but compromise is in short supply in our highly polarized country. From immigration policy to taxes to public spending, our politicians are locked in a zero-sum approach. The public has organized itself into various special interest groups, critical to funding campaigns, making compromise structurally elusive. Media reinforces the polarization with Americans turning only to outlets that confirm their prejudices.

Nowhere is the zero-sum approach more evident than with the issue of abortion. It is framed as a categorical choice, and democracy wrestles awkwardly with categorical choices. Pro-life groups argue that the unborn child, from the earliest stages, is a person deserving of full legal protection. Pro-choice groups argue government has no business placing any restriction on a woman's choice.

One of NCR's principal objections to much pro-life rhetoric and policy has been its historic indifference to the traumatic circumstances, to say nothing of the financial precariousness women in such a situation often face. On the other hand, the libertarian stance adopted by pro-choice extremists is equally distasteful. Libertarianism is almost always an abdication of moral seriousness.

With the resignation last year of Supreme Court Justice Anthony Kennedy and the appointment of Justice Brett Kavanaugh, the prospect of the court overturning its prior decisions conferring a nationwide right to an abortion, and kicking the issue back to the states, has been met with hopeful anticipation by some and dread by others. However much Roe v. Wade failed as an exercise in moral reasoning, it also failed politically: The justices arrogated to themselves the right to decide the issue, hoping to settle the matter. They settled nothing, and they short-circuited the necessary political debate that might have forged a reasonable compromise. The polarization since that time prevents any return to a pre-Roe political discussion.

State legislatures have busied themselves enacting laws to either restrict abortion rights or expand them. New York passed a law that removes virtually all restrictions, even contemplating the possibility that a child born in the process of a botched abortion could be left to die without legal consequences. Alabama has now passed a law that does not even permit abortion in cases of rape or incest, and allows doctors convicted of performing an abortion to be sentenced to 99 years in prison. This is what happens when the extremists get to dictate policy.

There is a reasonable compromise. Most European countries permit abortion for any reason in the early stages of a pregnancy, until 12, 14 or 16 weeks, but restrict it except in cases of a mother's health after that time. European politics have not been taken hostage by extreme advocates on either side of the issue. Allowing abortions in the early stages of a pregnancy has not resulted in a domino effect of ever-increasing indifference to the dignity of human life. The compromise reflects an awareness that an unborn child develops in utero, from a zygote to a child, and that once fetal viability has been reached, no one can any longer argue that the child is simply a part of its mother's body. It also conforms to what most Americans think. Polls over the decades have consistently shown that those in the broad middle of the population think abortion should be legal, but more restricted than current federal law.

Such reasonableness as has been achieved in other cultures is beyond reach in America today. Otherwise sensitive liberals display an alarming indifference to the violence of late-term abortion. Conservatives normally keen to fight any government regulation of their lives evidence no aversion to regulating women's reproductive choices. Their failure to consider the plight of a woman or even a child who has been raped or the victim of incest is despicable. Neither side is interested in persuading anyone. Neither side permits ambivalence. It is all or nothing.

Little has changed in the seven years since we wrote: "Between those extremes — for whom the issue of abortion is a welcome and perennial source of votes and fundraising — lie the vast majority of people, who express ambivalence but are waiting to be persuaded of some reasonable approach to diminishing the number of abortions. … They are the people who correctly wonder how the culture can leap from the reality that science has established — that nature itself dispenses with a high percentage of fertilized eggs, a loss that is not sacramentalized or given any official civic status — to criminalizing a similar act when done by humans."

The sad reality in the Catholic community is that our bishops corporately have aided and encouraged the most extreme anti-abortion forces, threatening politicians who do not adhere absolutely in their political votes on the issue and marginalizing all other life issues. They have not even shown the degree of tolerance demonstrated by St. Pope John Paul II and Pope emeritus Benedict XVI to societal compromises on the issue as well as to high-profile, pro-choice politicians. Over more than four decades the bishops have persuaded very few and only contributed to civic and political divisions.

Most Americans do not rank abortion very high on the issues they consider when deciding how to vote. The power of the pro-choice and pro-life groups rests on the zeal of their followers and the funds they provide to those organizations during election cycles. There are no profiles of courage in either party willing to break with the imposed orthodoxy of the zealots, although some Republicans, including President Trump, have suggested that the Alabama law goes too far. We wait for a Democrat to similarly stand up against the extreme law passed in New York. The issue will likely continue to be defined by extremists on both sides. The cynicism of the extremes is amplified if the strategy behind recent laws is to move the issue to the Supreme Court. The future looks grim.

We favor modifying the current legal regime, but we also oppose laws like that in Alabama which allow no exemptions in cases of rape or incest. Human life, whether it is a child in the womb, a child in Iraq, or a child at the U.S. border, should have its dignity respected and its life protected. As a matter of political compromise, we could support the kind of laws found in most other developed countries while humane work continues and programs are enacted that would make abortion rarer.

A version of this story appeared in the May 31-June 13, 2019 print issue under the headline: Achieve reasonable abortion compromise.