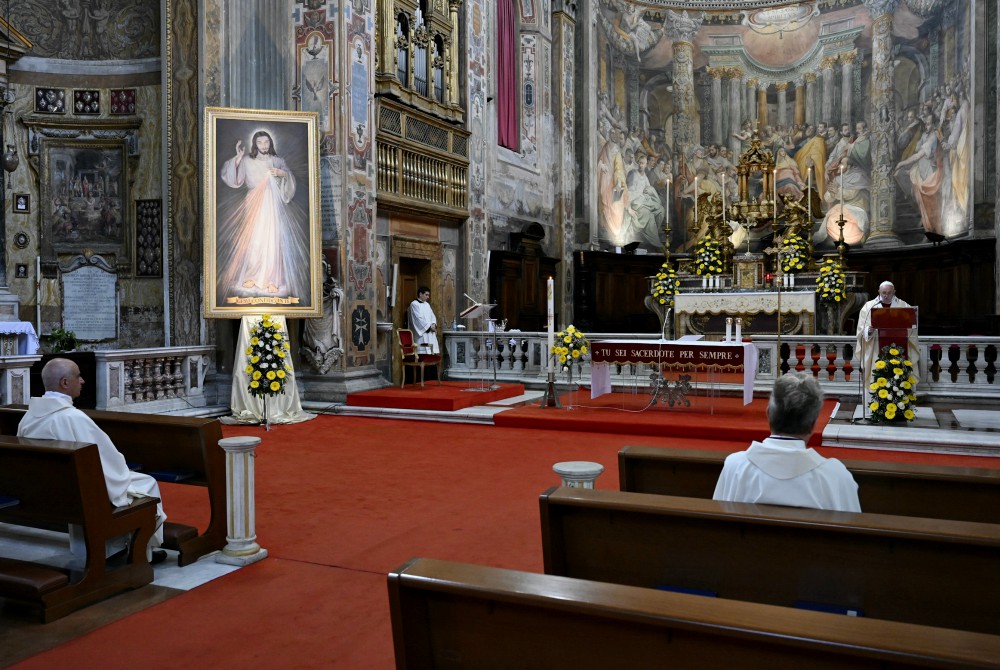 Pope Francis celebrates Mass marking the feast of Divine Mercy at the Church of the Holy Spirit near the Vatican in Rome April 19. (CNS/Vatican Media)

A few weeks into this forced retreat and the agita level is ramping up, a growing wondering from all corners of the Catholic lot about what we might look like, how we might be changed, post-pandemic.

But are we asking the right questions?

Life is usually not so segmented — nor so still — that it would make sense to ask in the name of an entire church: "What power will this very strange moment have to change us into something different from what we've been?"

How will we "un-quarantine"? asks lawyer and theologian Cathleen Kaveny of Boston College.

Will we be even more closed in on ourselves, she asks, bringing an ecclesial equivalent of social distancing to our religious practice when things return to normal? Or will we become, as San Diego Bishop Robert McElroy put it, "piercingly outward facing and missionary," newly informed by the significant role that befell laypeople during the pandemic?

A few rungs beneath the meta questions came the inevitable need for canonical clarity: Can someone go to confession over the phone? Can general absolution be administered as needed? Was Pope Francis engaging in cheap grace by so widely dispersing plenary indulgences (and, anyway, how do they work)?

Can the Eucharist be confected at a distance? Is it dependent more on geography or the priest's intent?

What are we learning from livestreamed celebrations of the Mass? What do we make of the digital gatherings of Catholics who share cup, bread and prayer? What effect might all of it have on our understanding of worship post-pandemic? 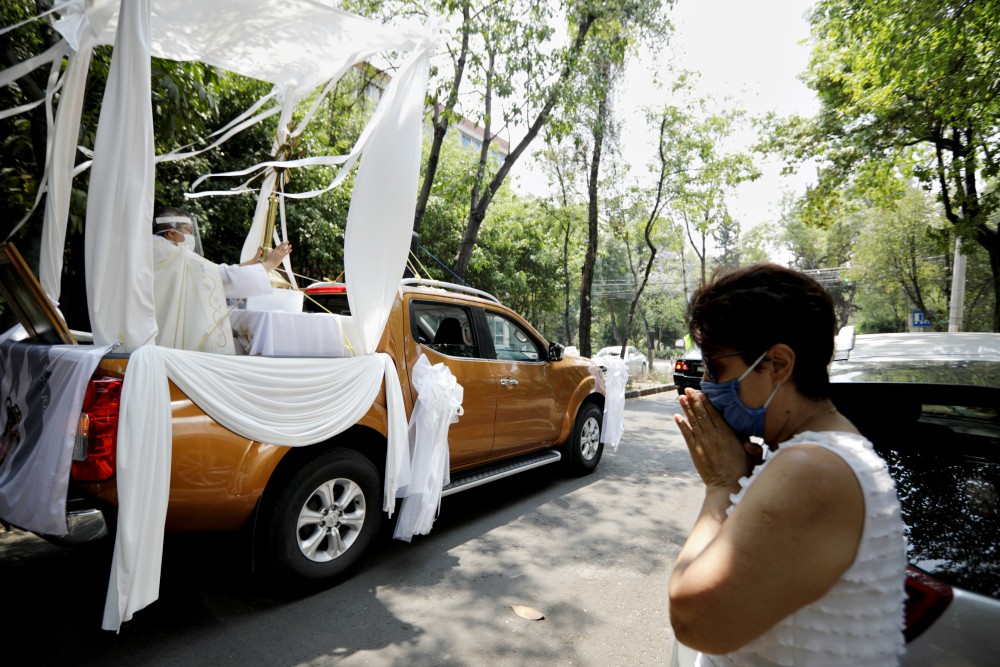 A woman prays as Fr. Angel Lauro Sánchez, pastor of the Lady of the Rosary Church in Mexico City, blesses people while riding in a pickup truck with a monstrance April 19 during the COVID-19 pandemic. (CNS/Reuters/Luis Cortes)

It is of no small note that even theologian Massimo Faggioli of Villanova University, one of Pope Francis' most ardent cheerleaders, admits that he's used the period of quarantine to author a massive two-part essay that asks if the Francis papacy is losing steam.

Why hasn't Francis used the momentum of support he has and the Synod of Bishops for the Amazon as well as the work of a previous commission to move ahead on ordaining married men in the first case and women deacons in the second?

Why hasn't he done more in his reorganization of the Curia and why hasn't he put in place the mechanics for moving reform forward?

Our sympathy may be shared with Faggioli's concerns but the greater portion is reserved for poor Francis, who, in showing a far more human face in the church's highest office, has invited the weight of unbearable expectations for reform.

And now he has to contend with the freeform anxiety that swirls and builds as tens of millions of Catholics the world over, already divided into camps, sit in quarantine free to imagine the best and worst of what might be when the doors finally open.

Usually missing from the analysis is the not-inconsequential reality that the Catholic landscape was shape-shifting long before the pandemic hit. The old parochial model of church that had established itself as immutable in the popular imagination has been disappearing for decades. The loosening of bonds to hierarchy and formal practice that some fear will be the result of the pandemic has been going on for more than 30 years. No one has done more to disconnect the Catholic faithful from trust in their priests and bishops than priests and especially bishops themselves.

The focus should be not on what the pandemic will cause, but what it might accelerate. Those concerned that any change be accompanied by a checkoff of all the correct liturgical and ecclesial boxes may have to accept that the church leaders, in their scandalous conduct of recent decades, forfeited the right to such considerations.

If Francis bears the brunt of outsized expectations, it may be because he has exemplified something very different — deeply human and spiritually profound — in his exercise of authority. A stunning moment in his papacy, appropriate to the questions roiling in the current circumstance, occurred as he returned from a 2015 trip to Africa.

During a news conference on the plane, a reporter asked if the church should ease its restrictions on the use of condoms given the threat of spreading HIV in Africa.

Francis responded that the question "seems too small to me."

He acknowledged the "perplexity" for the church but went on to cite when Jesus was asked by the religious authorities of his day, trying to trap him into defying the law, whether it was licit to heal on the Sabbath. The scene is preceded by another in which the authorities try to trap Jesus by questioning why he allowed his disciples to pick grain to eat on the Sabbath.

In that instance, Jesus responds: "If you had understood the meaning of the words: What I want is mercy, not sacrifice, you would not have condemned the blameless."

On the plane, Francis responded: "Malnutrition, exploitation of persons, slave work, lack of drinking water. These are the problems. … I say to humanity: Make justice, and when all are healed, where there is not injustice in this world, we can speak of the Sabbath."

Maybe our questions out of quarantine — a pope and people in place, captive to the unseen and unheard — are too small, too much about mechanics and organizational strategies.

Sr. Carol Zinn, addressing a national group earlier this year gathered to consider matters of church reform amid scandal, perhaps provided a key for addressing the same questions amid pandemic.

Zinn, a member of the Sisters of St. Joseph of Philadelphia and executive director of the Leadership Conference of Women Religious, spoke repeatedly of Jesus' choice of love over fear, mercy over judgment and of inclusion over exclusion.

In order to do that, she said, "we have got to do some serious work about how we are in relationship with one another."

How do we do that? How do we "make justice" in our own house and among us? How do we go about not just changing, but transforming, relationships at every level? They seem like big enough questions to ponder during this forced retreat.

This story appears in the Coronavirus feature series. View the full series.
A version of this story appeared in the May 1-14, 2020 print issue under the headline: Are we asking big enough questions?.