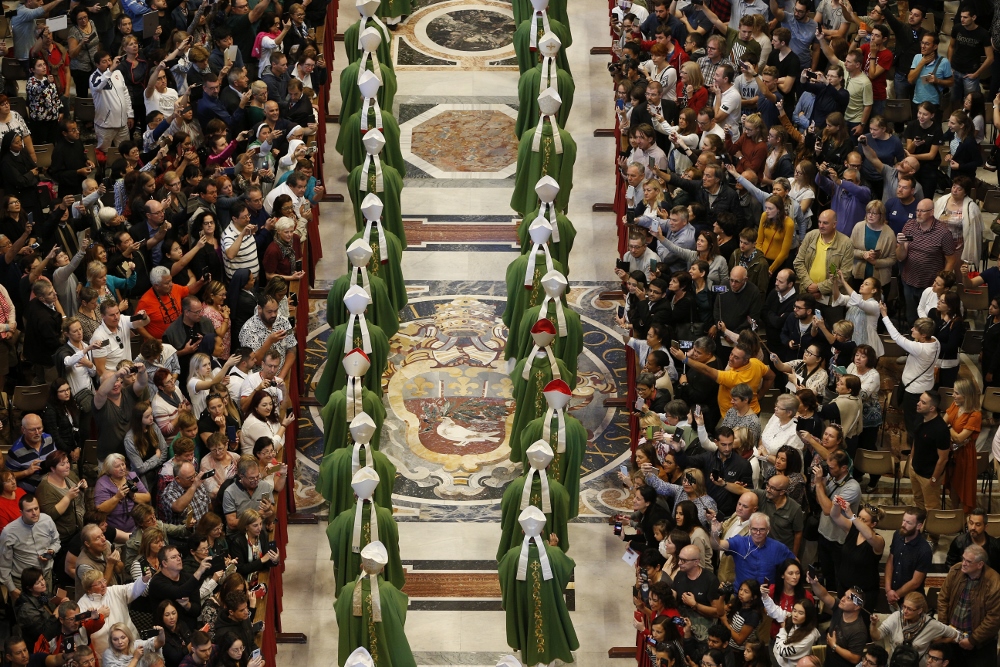 Bishops walk in procession as they arrive for the concluding Mass of the Synod of Bishops for the Amazon celebrated by Pope Francis at the Vatican Oct. 27. (CNS/Paul Haring)

As the recent Synod of Bishops for the Amazon amply demonstrated, the discussion quickly becomes thick and complex, as well as challenging to the status quo, when genuine dialogue is the order of the gathering. What Pope Francis has introduced in the synod process is literally unscripted territory for a church that, in recent decades, has merely pretended at dialogue about important issues.

What will finally issue from a synod considering the plight of both Earth and church in one of the ecologically most important and most imperiled spots on the planet is ultimately in the hands of the pope. If his approach to the synodal process in the past is any indication, however, the apostolic exhortation he produces, probably yet several months in the future, will reflect both the discussion as well as the decisions of those in attendance.

Collegiality was an idea that gained a foothold during the four years of deliberations at the Second Vatican Council (1962-65) and was institutionalized in the form of a synod by Pope Paul VI. But the meetings became largely meaningless showcases under St. Pope John Paul II, with tight boundaries around permitted discussion and with the presumption that the final document would reflect the pope's pre-synod views, regardless of the discussion.

On the other hand, Francis has used the Synod of Bishops as "a signature feature of this pontificate and ... as a means of advancing his program of reform," according to ecclesiologist Richard Gaillardetz.

The model is closer to that envisioned by bishops at Vatican II, who saw a standing synod as a way for bishops to exercise more authority more consistently in the governance of the church. Bishops were in a better position than Vatican bureaucrats to understand the needs of local people in a global church where cultures such as those in the Amazon, tucked away from wide scrutiny, might be misunderstood at best or completely ignored.

The outspoken resistance to this and previous Francis-inspired synods is largely a product of conservative Catholics in America, as papal biographer Austen Ivereigh points out elsewhere. In this case, the objections were largely to the possibility of ordination of older, married men; the possibility of women deacons; and variously to the primary substance of the synod, which had to do with limiting exploitation of resources and continued destruction of portions of the rainforest for such pursuits as mining and cattle production.

Taking on the excesses of capitalism is a sure way to draw fire from the U.S., as is any talk of altering the requirements for ordination. But the United States, not only priest-rich by comparison to the rest of the world but quite willing to take thousands of priests from countries suffering a far greater Catholic clergy deficit, is hardly the measure for what's right for the rest of the global church. It just has the loudest voice.

Inviting robust discussion and placing no limits on the dimensions of the conversations require trust in those representing the Amazon. At the same time, while stirring up opposition, no-holds-barred conversation also raises expectations. So critics on the left duly note that only men attending could vote. (There were some women in attendance.) Church leaders might celebrate "feminine genius," whatever that means, but if that genius is prohibited from influencing decisions at the highest level, the entire church loses.

And what are we to make of the pope's stated intention at the synod's end to reconstitute the commission studying women deacons, a possibility for which there was "substantial" support according to some attending the synod? Who will appoint those members? What will they be mandated to study? Indeed, after several previous go-arounds, what's left to study? And will this round of research lead to a decision?

Among the reasons Francis was elected, we are led to believe, is that the electing cardinals knew change was essential. The sex abuse scandal and the banking and other curial corruption scandals required a substantially new approach to church governance.

A significant component of the Francis reform is decentralization of the church, a turning back to individual bishops the degree of authority and trust required of healthy and mature leadership. The Francis boundaries do not comprise a punch list of "orthodox" positions as much as they reflect the requirement that bishops be pastors in more than a symbolic sense. If greater autonomy is granted, it is balanced by a diminishment of privilege and princely power. If more latitude is granted to speak freely, the expectation is that such speech will convey the deepest needs of the most vulnerable of the flock.

No easy answer exists to the question: What is a synod? It is a form meant to accommodate a more collegial approach to governance, one that recognizes that the church changes — constantly and not infrequently at the hands of forces over which it has no control.

The defense of the synod — and its evolution under Francis — was evident in the pope's remarks during a Mass closing the monthlong gathering in which he condemned those who believe themselves "righteous."

"The root of every spiritual error," he said, "is believing ourselves to be righteous."

The church is changing. The situation in the Amazon region gathers up, as we've noted before, the most compelling themes facing humanity and the church today. The Earth is indisputably under assault because of the activity of humans and nowhere is it more demonstrable than in this critically important ecosystem. Can humanity come to some agreement over ways to protect it?

The church there is under assault not only from environmental devastation but also because it is in desperate need of sacramental ministers if it is to survive. In a similar way that destruction of the rainforest is a harbinger of things to come globally, whether the church can find the will and wisdom to nurture the life of the Catholic community there may well determine how the wider church fares in the future.

This story appears in the Synod for the Amazon feature series. View the full series.
A version of this story appeared in the Nov 15-28, 2019 print issue under the headline: Church heads into unscripted territory.