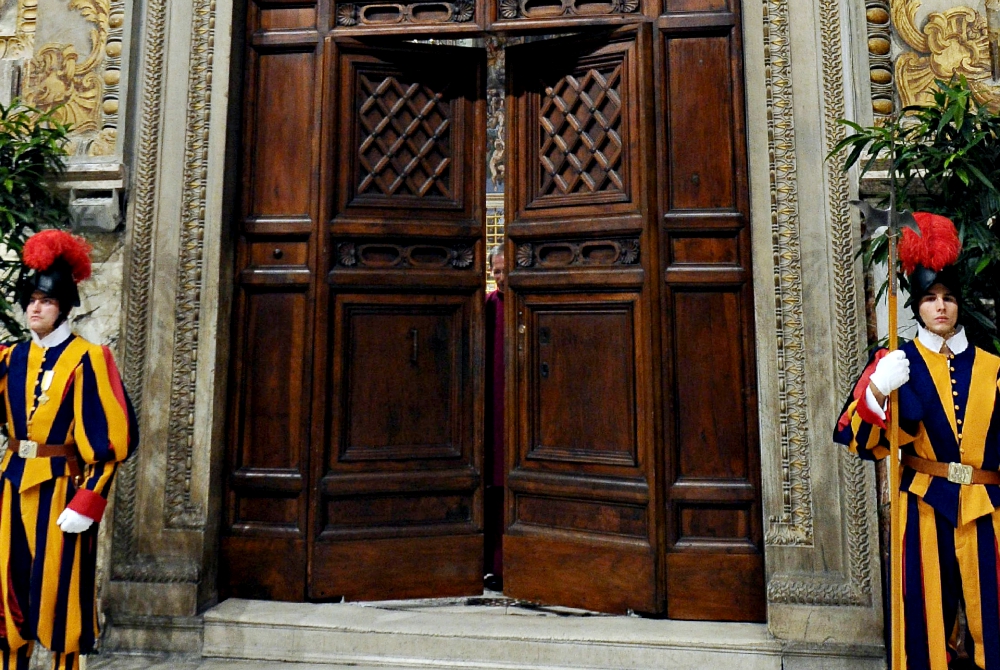 Swiss Guards stand in front of the doors to the Vatican's Sistine Chapel as cardinals begin the conclave to elect a successor to Pope Benedict XVI in March 2013. (CNS/L'Osservatore Romano via Reuters)

"Knock, knock. Who's there? More than half the church!"

There is a sense of inevitability to the point behind the chant that grabbed global attention when it was shouted out during a peaceful protest at the Vatican Oct. 3 as bishops and cardinals made their way to the opening session of the Synod of Bishops on young people.

Organized by the Women's Ordination Conference, the protest highlighted the fact that no women were permitted to vote at the synod sessions.

"Knock, knock. Who's there? More than half the church!"

It's a catchy meter.

Speaking of women, as it does, it's true. Visit any church, anywhere, any Sunday. No one needs a scientific survey to accept the claim.

And guys — you in the purple and red who to this point in Catholic church history have enjoyed the luxury of sitting in male exclusiveness and pronouncing as princes for the nearly 1.3 billion Catholics in the global church — you haven't heard the last of it.

The women aren't going away. And in this particular instance, you were caught in the web of your own illogic. As Josh McElwee reported recently, Lasallian Br. Robert Schieler, a voting member of the synod, asked a synod official prior to the gathering why women religious attending the meetings were not allowed to vote.

Responded the official: "Well, because you have to be ordained to vote."

But Schieler, as a brother, isn't ordained. So, Schieler wondered, "is that the reason or not?"

It's not. The real reason has nothing to do with ontological differences or any tradition that makes sense. It has to do with biological makeup. Let's call it what it really is — it's sexism. And the church's brand of sexism is no more persuasive than any other for being wrapped in male-conjured theology that teeters atop an exegesis that largely ignores the women who were first to the empty tomb — the very first to carry the Resurrection story — and Jesus' unusual (for the era) reliance on women throughout his ministry. It makes less and less sense with each passing year.

If the wider world's acknowledgment of how mistaken cultures and other theologies have been about the place and value of women is not convincing enough to spur significant change, perhaps the utter scandal to which an all-male clerical culture has subjected the church will force a change.

The U.S. bishops, who have stumbled through layer upon layer of that scandal, will attempt a new and admirable approach when they go on retreat in January. The retreat will be led by a venerable spiritual master, yet another man. Would they dare invite a strong feminine voice to the gathering? We could suggest some.

In a few weeks, the bishops will fill a large ballroom in Baltimore to conduct their annual business meeting, and the only women in the room will be on the sidelines.

Save for overhead screens and electronic voting, one might be heading into a scene from several centuries ago.

Most Catholic women are long over papal constructions of "feminine genius" or being cast as strawberries atop a cake or interpretations of Mary that stop at some magical virginal docility and ignore the harsh reality of a mother dealing with an itinerant preacher son who ends up on the wrong side of civil and religious law.

More than half the church wants in. They have a lot to offer that's been missing.

This story appears in the Synod on the Youth 2018 feature series. View the full series.
A version of this story appeared in the Nov 16-29, 2018 print issue under the headline: 'Knock, knock. Who's there? More than half the church!'.