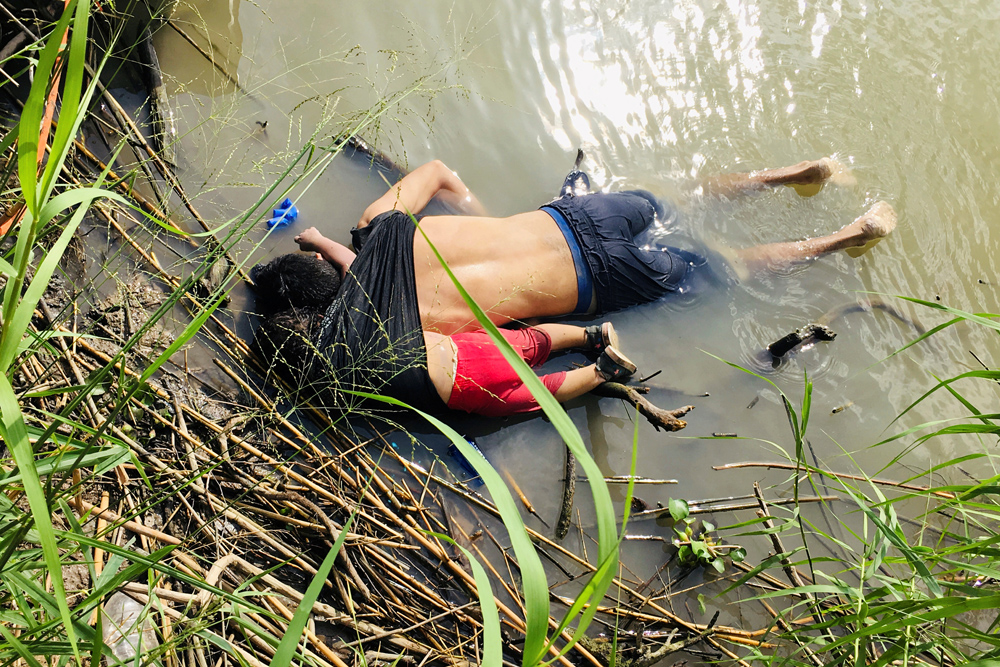 The bodies of Salvadoran migrant Oscar Alberto Martinez Ramirez and his 23-month-old daughter, Valeria, are seen June 24, after they drowned in the Rio Grande in Matamoros, Mexico, while trying to reach the United States. (CNS/Reuters)

The arresting image of the bodies of Salvadoran migrant Óscar Alberto Martínez Ramírez and his nearly 2-year-old daughter Valeria, face down in the shallow waters of the Rio Grande River, was finally enough to elicit an impassioned plea from the United States Conference of Catholic Bishops: "This image cries to heaven for justice. This image silences politics. Who can look on this picture and not see the results of the failures of all of us to find a humane and just solution for the immigration crisis?"

It took that photo and a statement of lament by Pope Francis about the image to move the bishops to the kind of language that begins to gather in the horror of this national moment along our southern border. It took this moment, a mere dot on a tragedy-riddled timeline, to move the bishops beyond the anodyne and saccharine pronouncements previously pushed out of their headquarters following the evidence of caged children, separated families and manipulations of law by the Trump administration and its operatives, all clearly designed to punish, rather than relieve, desperation.

It might be easier if the image silenced politics and removed it from the calculus of the bishops' response. But that probably is not the case. Little else but a wish to remain cozy with the Trump administration can explain the hierarchy's resounding reticence in the current situation.

If the image, as the bishops claim, demonstrates the results of the failures to find a just solution, it also should conjure for them the seemingly endless stacks of images that emanated from Central America, particularly Honduras, El Salvador and Guatemala, in recent decades. They showed, for those who cared to look, the deplorable consequences of long U.S. involvement in the region, of our complicity with some of the bloodiest thugs in the region. If, as some have stated, we should look at the deeper causes of today's problem, an honest investigation would be unsettling for North Americans.

Immigration policy is a complex matter. Borders do matter, as does the rule of law. But desperation, the need to seek safety and opportunity for one's family, reaching a conclusion that no alternatives exist but to flee — these are not the motives of "bad hombres," to use one of a stream of imbecilic terms the president has ascribed to those seeking refuge. San Pedro Sula, San Salvador, Guatemala City and their vicinities have become unpredictable and extremely violent territories. Much of the violence is due to the power of drug cartels, which feed the insatiable demand for narcotics in the United States.

People showing up at the border are not vacationing. They are frantic and out of alternatives. This is survival, not opportunism.

It is futile to attempt to argue with, much less expect something better, from an administration that has justified separating families and caging children in deplorable conditions — unsanitary, without proper food and crowded to cruel proportions. What can be said in the face of the outrageous reasoning of Ken Cuccinelli, the acting director of U.S. Citizenship and Immigration Services, who couldn't even drum up a bit of empathy for the dead father and his daughter?

During a recent CNN interview, Cuccinelli said that the drowning was the fault of the father, who should have observed the rules regarding asylum. Notwithstanding that the claim is absurd, and disgusting, on its face, the fact is that even if the anguished father had kept up with the news and the law on the dangerous and difficult trek northward, one might have excused him for becoming confused. The Trump administration plays daily games, at times, shifting the rules. The basic fact is that anyone can seek asylum anywhere along the border. It is not illegal.

It is, however, cruel to contemplate rule changes, as is currently underway in this administration, that would essentially eliminate asylum for Central Americans.

It should not be a futile wish that the Catholic community's leaders, so insistent on the worth of every human, would be crying out from the tops of their chancery offices over the blatant injustice at the border. There are exceptions. It seems clear that while the conference in its official statements has been mealy-mouthed, bishops along the border have felt free to be more impassioned in their responses.

One of the more notable statements came from Bishop Daniel Flores of Brownsville, Texas, who was reacting to a different drowning — this of a 20-year-old Guatemalan mother and her three children, two infants and a toddler — and to the deplorable conditions children were being detained in at the border, as well as to comments that the drowned were not "our children." On his Twitter account June 25, Flores said, "Any discussion about immigrant children that begins with 'but they are not our children' is starting from a position both contrary to natural law and Catholic Faith."

National borders are not absolute.
To argue that we may defend them by any means deemed effective is statist voluntarism.
It manifests at the level of government the false claim of an individual’s right to unconstrained will.
Either way, the powerful decide who gets thrown away.

Flores further argued that national boundaries "are not absolute. To argue that we may defend them by any means deemed effective is statist voluntarism. It manifests at the level of government the false claim of an individual’s right to unconstrained will. Either way, the powerful decide who gets thrown away."

Bishop Mark Seitz of the border Diocese of El Paso, Texas, has been equally uncompromising in his advocacy for migrants and in his critique of U.S. culture.

Flores and Seitz are perhaps the most visible signs of an official Catholic voice in this matter, but the people of God are prophetically and powerfully active in helping to ameliorate the worst effects of U.S. policies. In this case the normally led are doing the leading. Catholic groups and individuals on both sides of the borders are doing heroic work to bring some comfort to those in greatest need.

There is no greater example of Catholic action than the Hope Border Institute, a grassroots effort "that seeks to bring the perspective of Catholic social teaching to bear on the social realities unique to our region." No regional issue is more pressing than the plight of refugees, and the organization does laudable work on both sides of the border.

What's missing are the connections the U.S. bishops once had with their Central American counterparts. Why haven't U.S. bishops invited some of the bishops from the most affected countries to address both the conference at their semi-annual meetings, and dioceses around the country, to better explain the reality on the ground and the needs in Central America?

One need not do a great deal of interpreting of our sacred texts to get this one right.

It's not complicated. The mass of people arriving at our border are mostly escaping desperate and dangerous circumstances, trying to protect their children — our children. Our government is brutalizing them — men, women and children — under the cover of manipulated law and a narrative that raises unjustifiable fear and prejudice.

Bishops, where are you?

A version of this story appeared in the July 12-25, 2019 print issue under the headline: Bishops' leaders late to respond.