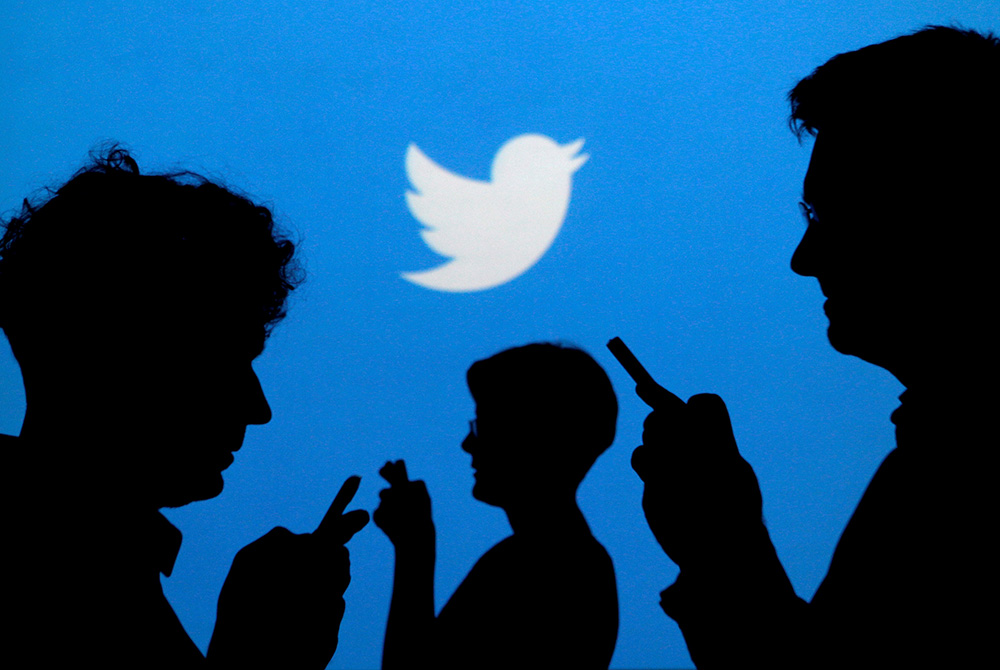 People use mobile phones in front of the Twitter logo in this illustration photo. (CNS/Kacper Pempel, Reuters)

As the presidential election season moves into high gear during its last weeks, some American bishops have taken to social media to disparage the Democratic nominee, former Vice President Joe Biden, a Catholic, and throw their support behind the Republican incumbent President Donald Trump. Despite the prohibition of canon law against such political endorsements by clergy and the common sense approach that would dictate church leaders maintain nonsectarian positions publicly, several prelates have entered the partisan fray and the result has been increased division and confusion among the faithful.

Bishops have an important and distinct responsibility in the church to maintain communion by virtue of their episcopal office. They represent communion within the local church and they represent communion of the local church with the universal church, which is why during the Eucharistic Prayer the presider always mentions the local bishop and the pope by name. So it is especially disturbing when a bishop publicly embraces a stance that contradicts his primary ecclesial responsibility.

Furthermore, by virtue of their office as the local ordinary, diocesan bishops have another responsibility in terms of governance. They are meant to be teachers and pastors to all the baptized in the local church. But this authority is not to be exercised as if they were mini-monarchs or CEOs of private corporations, though sadly some bishops misunderstand this. Instead, as the Second Vatican Council explains, "Bishops, as vicars and ambassadors of Christ, govern their particular churches entrusted to them by their counsel, exhortations, example, and even by their authority and sacred power, which indeed they use only for the edification of their flock in truth and holiness." (emphasis added).

What is edifying about tweets from Bishop Joseph Strickland of Tyler, Texas, which endorsed and promoted an offensive, error-laden, and insulting video by Fr. James Altman of La Crosse, Wisconsin?

What is edifying about tweets from Bishop Thomas Tobin of Providence, Rhode Island, which questioned Biden's Catholicity in a petty and demeaning manner?

What is edifying about tweets from Bishop Richard Stika of Knoxville, Tennessee, which also question the faithfulness of Biden and also Speaker Nancy Pelosi, misleadingly reducing Catholicism solely to one's political stance on abortion?

This is not the first time that Strickland and Tobin have garnered national attention for imprudent and divisive comments. Earlier this year, Strickland signed a letter endorsing a conspiracy theory alleging safety restrictions mandated because of the novel coronavirus were designed to create a new "world government."

In 2018 Tobin announced he was "leaving Twitter," decrying the platform as a "distraction," an "obstacle," and an "occasion of sin for me and others." Less than a year later he was back tweeting and received backlash for insisting that Catholics should not "attend LGBTQ 'Pride Month' events," mistakenly claiming, "They are especially harmful for children."

So what are Catholics to think in the age of social media where bishops, like all people, can post comments and express views that are instantaneously accessible around the globe? This is all the more pressing when some bishops position themselves as "culture warriors" intent on condemning anything with which they personally disagree. To help answer this question, I asked two Catholic theologians who specialize in ecclesiology to weigh in on the matter.

Natalia Imperatori-Lee, professor of religious studies at Manhattan College, suggests that one of the unforeseen theological problems of bishops on Twitter is that it is not always clear "who" they are in the given moment of their post. "Are they [private] citizens expressing opinions, which is certainly their right? Or are they tweeting in an official capacity?"

The role of the local bishop — and the collection of regional bishops speaking in a unified body, such as the bishops' conference in the United States — is in part to help inform the consciences of the faithful. Imperatori-Lee said, "I think it's important to stress that the ultimate moral authority for a Catholic is his/her conscience. You are obligated to follow it." She added that it is important to remember that the "bishop is one voice among the many voices that Catholics with informed consciences should hear in deciding their vote."

But the personal opinions and partisan politics of individual bishops (or, for that matter, priests, vowed religious and lay ministers) are not supposed to be factored into this conscience formation. And yet, given the ubiquity and accessibility of social media, many Catholics understandably mistake individual views expressed by bishops for authoritative teaching.

It's important for Catholics to remember that not everything that appears in a given bishop's Twitter feed is authoritative or even prudent.

In addition to the increasing lack of distinction between a bishop's personal opinion and official teaching, another problem the digital age presents to the church is the dissolution of geographic boundaries. Canonically, bishops exercise jurisdiction in their local church and generally do not have the authority to interfere in other dioceses.

However, with the reforms of Vatican II and a return to the ancient church's understanding of collegiality and synodality, there is renewed recognition of the ways in which bishops are called to, as Lumen Gentium says, "foster and safeguard the unity of the faith and to uphold the discipline which is common to the whole church." Commenting on these developments, Brian Flanagan, associate professor of theology and religious studies at Marymount University, said the council "opened the possibility of providing more ways for bishops to be 'solicitous' for the faithful outside their own diocese."

Flanagan notes that, "Vatican II primarily envisioned that would occur in and through structures of synodality, especially provincial synods, regional and national episcopal conferences, and the universal synod of bishops." When it comes to the bishops exercising this sort of solicitude for the formation of consciences across American dioceses, the best illustration is found in the conference's quadrennial Catholic voting guide: "Forming Consciences for Faithful Citizenship."

Among the things the council did not anticipate at its close in 1965 were the Internet or the democratizing of mass communication in the ways we witness today. We are still grappling with the fact that opinions, perspectives, facts (and errors), statistics and other information (and misinformation) are bombarding Catholics all day online. Church leadership and Catholic theology have not adequately kept pace, nor do we have clear guidance about how to process this information, including comments coming from bishops online.

While we continue to seek greater understanding of how to use and interpret new communications technology in the life of the church, it's important for Catholics to remember that not everything that appears in a given bishop's Twitter feed is authoritative or even prudent. Imperatori-Lee encourages us to "pray for all the bishops, particularly that they be filled with prudence, discernment and a desire for servant leadership." She added: "At the same time, I think the college of bishops, particularly the episcopal conferences, have a responsibility to set out expectations for their brother bishops and engage them in fraternal correction."

Flanagan offered a similar observation. "It seems we might need something like a set of principles for 'just conduct' on the Internet," which could serve as a guide for bishops. Drawing on the letters of St. Paul, he added that bishops — and by extension, all Catholics — should ask themselves: "Is what I say, tweet, like, share or comment [on] building up the church, or not?"

In the meantime, as we face difficult choices in an historic election, the best and most faithful course of action may be to respectfully ignore the political tweets of bishops, pray for them and the people of their dioceses, and take the time to learn, reflect and discern what the best course of action is for you in exercising your civic responsibility.

It is also important to contextualize what voting for a presidential candidate actually means. Imperatori-Lee summarizes well what it is we are doing when we cast our vote. "We should also be clear here that voting in the U.S. isn't a full-throated endorsement of every single thing a politician or a party believes. We're voting for presidents, not messiahs. A vote is a bet — a bet that if this person is elected more of the common good will be served. A vote is not the sum total of a person's moral action in the world."

A version of this story appeared in the Oct 16-29, 2020 print issue under the headline: The complicated reality of Catholic bishops on Twitter.