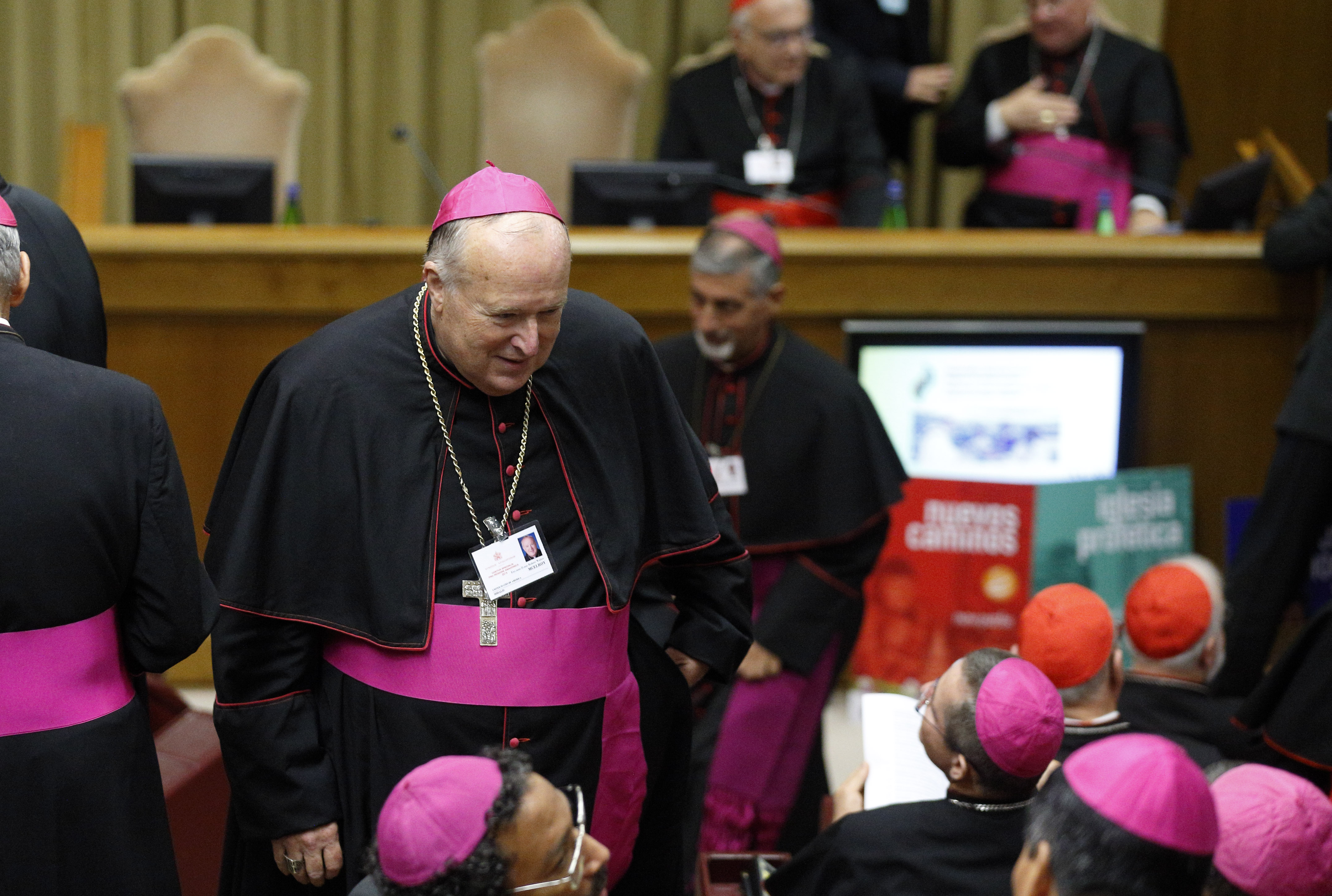 Bishop Robert W. McElroy of San Diego arrives for the first session of the Synod of Bishops for the Amazon at the Vatican Oct. 7, 2019. (CNS photo/Paul Haring)

Last week, San Diego Bishop Robert McElroy delivered the 2019 MacTaggert Lecture at St. Mary's University in San Antonio. In a manner in keeping with his typical erudite yet accessible articulation of church teaching and recognition of the pressing signs of our times, McElroy made a case for a broader embrace of what he called "the type of synodal pathway that the church in the Amazon has been undergoing."

Drawing on his own experience as a participant in the Synod of Bishops for the Pan-Amazon Region last month and having overseen a local synodal process in the San Diego Diocese, McElroy identified four ecclesial characteristics that result from a more-synodal existence: a missionary church, a participatory church, a welcoming church, and a church of harmony. In addition to his own experience and theological grounding, McElroy situates his remarks within a deep spirituality informed by the Gospel, an observation also made this week by my NCR colleague Michael Sean Winters.

In many ways, McElroy is carrying on the tradition of another California bishop, the late San Francisco Archbishop John R. Quinn. In fact, McElroy was ordained by Quinn and served first as his episcopal secretary and then his vicar general. Quinn also requested that McElroy preach at the vigil service for his funeral in 2017, so it should be no surprise that there exists such continuity in thought and ministry.

Quinn is remembered as an extraordinary pastor and a talented theologian with a profound appreciation for the Second Vatican Council's teaching on the meaning of church as expressed in Lumen Gentium. For someone ordained to the priesthood nearly a decade before the opening of the council, it may surprise some people that Quinn had such a deep and seemingly intuitive understanding of the church as fundamentally the people of God and the need for broader consultation of the laity in church leadership.

As NCR executive editor Tom Roberts summarized after Quinn's death, "In speeches and writing, Quinn called for decentralizing church governance, giving far more influence to local communities in the choice of bishops and diminishing the role of the Vatican Curia."

Additionally, his research reflected an ecclesiology emphasizing the primacy of the baptized and the dynamic role of the Holy Spirit's operation in the church through synodality.

Such is the case with his last publication, the little 2013 book titled, Ever Ancient, Ever New: Structures of Communion in the Church, in which he writes: "One of the earliest structures of communion were synods." Far from a modern departure from unilateral governance or teaching authority, synods as a structure of communion predate the Constantinian shift within Christianity during the fourth century and "were a witness of a deep and enduring conviction that the Church is one and that it is catholic and apostolic."

As McElroy rightly acknowledged in his lecture, "such a synodal pathway is not foreign to the church in the United States, nor is it beyond our capacities. Last year, the church in the United States, completed a significant dialogical process in its fifth Encuentro … the Encuentro process sought dialogue, reflection and action on the level of the parish, the diocese, the region and the nation as a whole." Hispanic and Latinx Catholics are already modeling what a broader, consultative and dynamic mode of being church looks like.

Theologian Natalia Imperatori-Lee, in her excellent recent book, Cuéntame: Narrative in the Ecclesial Present, notes: "The Encuentro gatherings are theologically significant because they put into practice the participative and collaborative process of church governance endorsed by Vatican II, emulated by the Latin American Bishops' Conference (CELAM) at Medellín, and echoed by contemporary systematic theologians."

Too often the experiences of Hispanic and Latinx Catholics are viewed within the context of the United States as "new" or "foreign" or "emerging," and therefore subjugated, minimized or dismissed. (This is the case despite the fact that Hispanic Catholicism, with its manifold cultural iterations, has been present in what is now the United States since pre-colonial times.) As with the rise of dismissals of the recently concluded synod for the Amazon, the ignoring or rejection of the Encuentro process by many white and Anglo Catholics is a form of racism. And, ironically, it is also a rejection of what the church might look like at its best.

Too often the experiences of Hispanic and Latinx Catholics are viewed within the context of the United States as "new" or "foreign" or "emerging," and therefore subjugated, minimized or dismissed.

A broader sense of synodality beyond that consultative body of bishops in Rome is about proper recognition of the place of all the baptized faithful in the prudential discernment about church decision-making and governance. It is not a call to do away with hierarchical leadership. No, the church is not a democracy. But neither is the church a monarchy wherein local bishops, bishops' conferences, or even the pope rules by fiat. The church is a "hierarchical communion," as Lumen Gentium explains, but one whose ministers arise from and are oriented to the service of all the baptized. The operative noun is "communion," which refers to a deep bond of relationship rooted in baptismal equality, and this sense is too often lost when church leaders and the laity succumb to what McElroy calls "the bunker mentality" and "the culture of maintenance."

Pope Francis has routinely signaled the need for greater inclusion and openness in the church. This ecclesial and evangelizing vision is best summarized in the pope's continued call that all Christians embrace their call to be "missionary disciples." The responsibility for welcome, inclusion and evangelization is one shared by everybody, regardless of their position in the church. It is an empowering message, but one that also bears co-responsibility and demands active participation on the part of the laity, as McElroy explained.

On the one hand, I completely agree with McElroy and Quinn before him — that a fuller recovery of the ancient synodal structures, which have been renewed in part under Francis' leadership, is a way forward in the midst of what McElroy calls "this moment of turmoil and stasis for our church."

Yet, on the other hand, I wish to make a stronger claim. I would suggest that synodality is not merely an option to be recovered, but is in fact the only authentic way to be church. And the broader church in the United States would do well to learn from the wisdom and example of Hispanic and Latinx Catholics, who have provided at least one living model of the ancient Christian tradition of synodality.

[Daniel P. Horan is a Franciscan friar and assistant professor of systematic theology and spirituality at Catholic Theological Union in Chicago. His most recent book is Catholicity and Emerging Personhood: A Contemporary Theological Anthropology. Follow him on Twitter: @DanHoranOFM]

A version of this story appeared in the Dec 27, 2019-Jan 9, 2020 print issue under the headline: Synodality is the only way to be church.