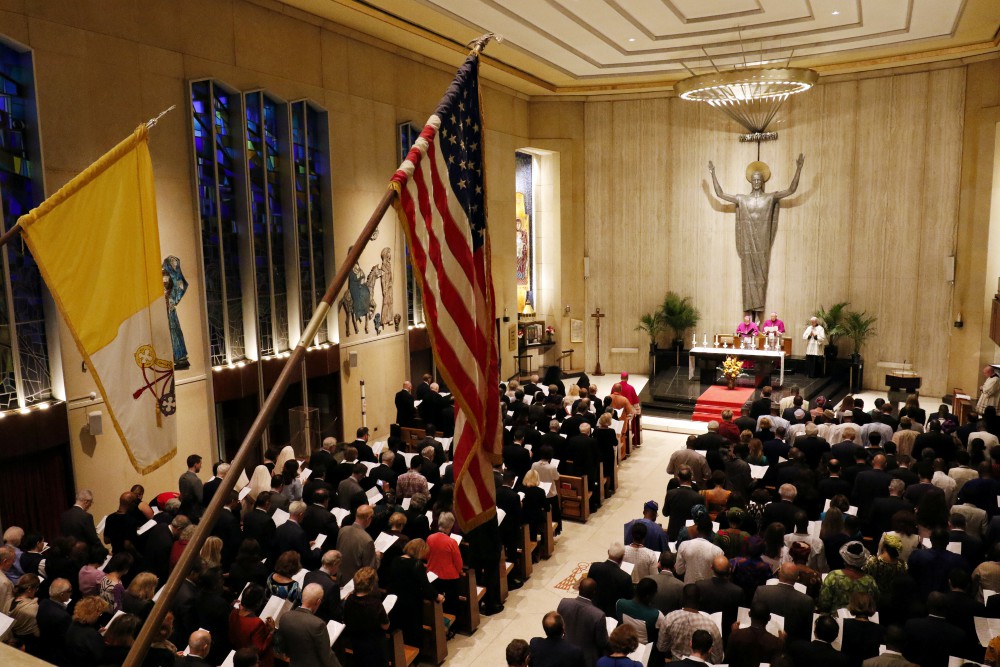 United Nations diplomats and other guests gather for a prayer service Sept. 16, 2019, at Holy Family Church in New York City. The service, hosted by the Vatican's Permanent Observer Mission to the U.N., was held on the eve of the opening of the 74th session of the U.N. General Assembly. (CNS/Gregory A. Shemitz)

This week, 11,000 women from around the globe should have landed on the East Side of Manhattan for what was supposed to be the start of the 64th session of the United Nations' Commission on the Status of Women.

The event is dedicated to promoting women's rights, gender equality and the empowerment of women and girls. Sadly, it was canceled this year, one of countless casualties of the novel coronavirus outbreak.

But in the week leading up to the meeting, a U.N. report was released that suggests that religion may be a greater threat to women's health and existence than any virus.

The report from the U.N.'s special rapporteur on freedom of religion or belief examines the way in which religious groups influence laws and state-sanctioned practices that violate the rights of women, girls and LGBTQ persons.

"I firmly reject any claim that religious beliefs can be invoked as a legitimate 'justification' for violence or discrimination against women, girls or LGBT+ people. The right to freedom of religion protects individuals and not religions as such," Ahmed Shaheed, special rapporteur on freedom of religion or belief, said in a press release.

"Women and LGBT+ people experience discrimination and violence inflicted in the name of religion by State and non-State actors that impedes their ability to fully enjoy their human rights," Shaheed added.

He also expressed concern about the rise of religious and political campaigns that invoke religious freedom in an attempt to roll back human rights.

Though the report does not name any religious institutions in particular, there is little doubt that the rapporteur and his committee had the Vatican in mind as they wrote this analysis.

The Vatican not only exerts influence in countries around the world, it is also the only religious institution that wields its power within the U.N. itself.

Operating under the name the Permanent Observer Mission of the Holy See to the United Nations, the Vatican is the only religious body in the world that enjoys the privileges of a country at the U.N. Though it does not have full status as a member state, in 1964 it was granted permanent observer status, with fully staffed missions in both New York and Geneva.

The Holy See assumes this right by asserting that the Vatican City-State is a proper country — even though it has a population of 800 and no permanent citizens — and because it claims to have global moral authority.

Though it does not get a vote at the U.N., the Holy See's position affords it formidable influence in conferences and meetings, the development of treaties, and negotiations of resolutions and agreements.

The Holy See remained a relatively innocuous presence at the U.N. during its first three decades. But things began to shift in 1994 at the Cairo International Conference on Population and Development and in 1995 at the Beijing Fourth World Conference on Women (which was supposed to celebrate its 25th anniversary at the Commission on the Status of Women gathering this year).

In Cairo, the Holy See initiated a tactic that has now become commonplace during member states' negotiations: dissenting from the use of certain language — usually having to do with sex or gender — in documents or goals. It managed to hold up consensus on the Beijing Platform for Action on the rights to reproductive health by insisting that it could not assent to any language that gave the impression that sex and reproduction could happen outside the bonds of marriage.

It also objected to phrases that advocated for artificial contraception or used the phrase "unwanted pregnancy." It did all of this, of course, in the name of halting the availability of modern contraceptives and abortion services to developing nations — family planning resources that could have significantly curbed the spread of poverty, hunger, illness and even death.

Similarly, in Beijing, the Holy See unleashed a hostile takeover of the discussion of the word "gender," forcing the president of the conference to add an addendum stating that the word must only refer to the two sexes, male and female, and that no new meanings could be used. This continues to influence policy negotiations at the U.N. to this day.

It also objected to use of the phrase "intimate partner violence," in resolutions about protecting women from all forms of assault, claiming that by agreeing to such language, the church would be seen as condoning sexual relations outside of marriage.

The Holy See also instituted one of its most powerful tactics in Cairo and Beijing: forging alliances with small countries where they already have undue political influence (like Honduras, Guatemala and Malta) and hardline Islamic nations (like Libya and Iran) to undermine the international consensus on women's right to reproductive health, including access to family planning.

These unholy alliances have grown over time, and today one of the Holy See's strongest allies at the U.N. is Russia, a country whose president has banned so called "gay propaganda" and is proposing a constitutional amendment that would define marriage as between one man and one woman.

Given this history, it is little wonder that the Holy See slammed the special rapporteur's report on the freedom of religion and belief last week. Archbishop Ivan Jurkovic, the Holy See permanent observer to the U.N. in Geneva, lamented:

Particularly unacceptable and offensive are the numerous references that recommend that freedom of religion or belief and conscientious objection must be surrendered for the promotion of other so-called "human rights," which certainly do not enjoy consensus, thus being a sort of "ideological colonization" on the part of some states and international institutions.

The archbishop brands any rights that protect women and LGBTQ persons as "new human rights," and claim that these rights do not enjoy consensus among U.N. member states.

But his claim distorts the reality of consensus. Most member states support protecting the rights of women, particularly their rights to reproductive health care, and LGBTQ persons. But those who are opposed are all members of the Holy See's unholy alliance, particularly Russia and radical Islamic nations like Saudi Arabia and Egypt.

The archbishop uses the trope "ideological colonization" — a favorite of members of the hierarchy, including Pope Francis — to describe the report's demand that states repeal gender-based discrimination laws, particularly those enacted with reference to religious considerations. But again Jurkovic twists the truth.

The reality is that the Holy See and other religious institutions are using their ideologies to control and dominate the bodies and lives of women and LGBTQ persons worldwide. In some cases, these vulnerable people are being subjected to the beliefs of religious groups to which they do not even belong.

This is certainly the case in the United States, where the Trump administration has given vigorous support to the U.S. bishops' campaign to use religious liberty claims as justification for denying women and LGBTQ persons fundamental rights to health, safety and protection from harm.

The rapporteur's report is the boldest attempt we have seen so far to curb the overreach of religious groups in civil law. The question is, will states finally find the courage to stop giving in to them?