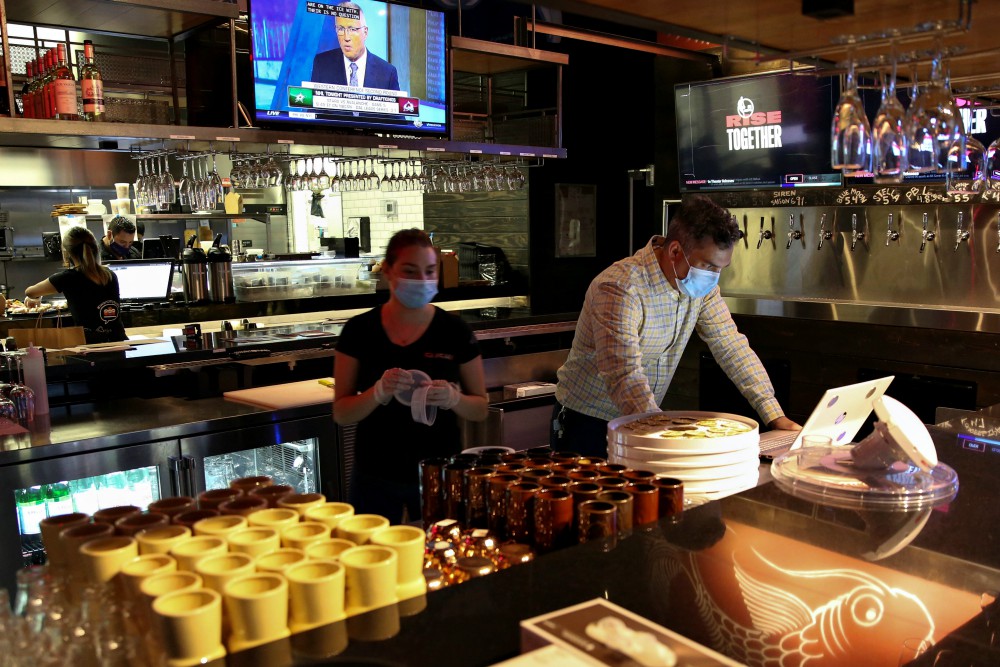 People in Miami work at a restaurant Aug. 31 during the coronavirus pandemic. (CNS/Reuters/Marco Bello)

In his book A Shameful Business, labor expert James Gross contends that "the right to life and limb" is regularly violated in U.S. workplaces, where "crimes against humanity" turn workers into "disposable things." Despite his promises to the working class, President Donald Trump has assaulted workers' rights to life, limb and livelihood throughout his presidency.

The nonpartisan Economic Policy Institute recently produced a report detailing "the Trump administration's 50 most egregious attacks on working people." The head of the BlueGreen Alliance, a coalition of environmental groups and labor unions, deemed Trump "the most anti-worker and anti-environment president of our lifetime."

This should matter to Catholic voters, who have an obligation to consider a candidate's respect for the dignity and rights of workers. As Catholic bishops have recently reminded us, Catholics must consider all threats to human dignity, life and the future of the planet, in addition to the "preeminent" threat of abortion.

Unfortunately, workers' rights are seldom mentioned in the context of elections, despite their emphasis in Catholic teaching. The U.S. Conference of Catholic Bishops' "Forming Consciences for Faithful Citizenship" states "treating workers as mere means to an end, deliberately subjecting workers to subhuman living conditions" and "treating the poor as disposable" are "intrinsically evil acts." Political leaders must safeguard the "dignity of the human person and the common good by respecting the dignity of work and protecting the rights of workers." 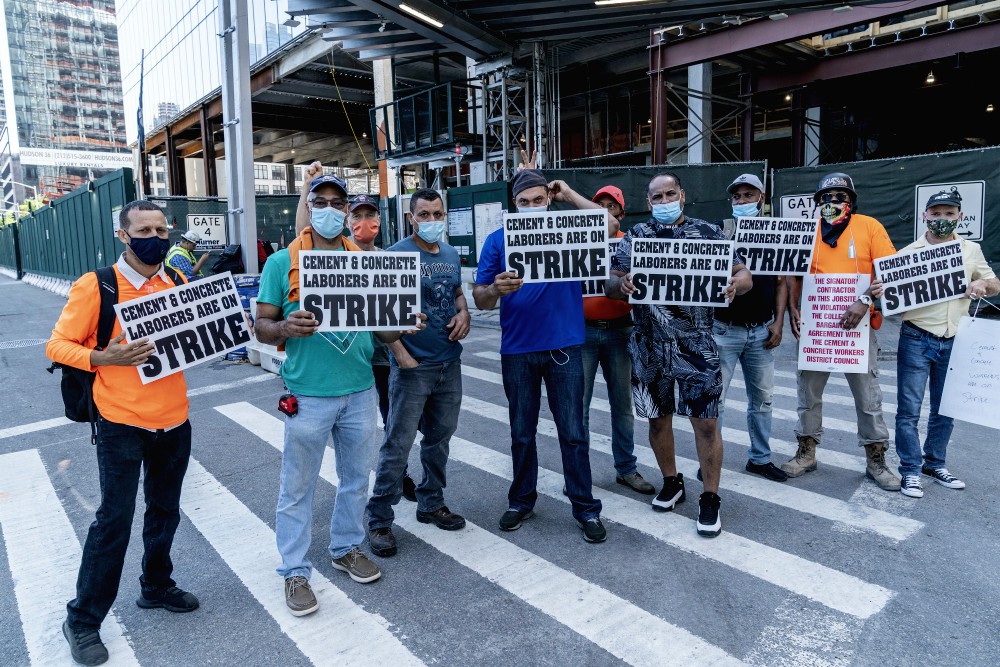 St. John Paul II maintained in Laborem Exercens that by toiling as a manual laborer, Jesus revealed that the dignity and rights of all workers are sacred. Solidarity with workers is required to prove "fidelity to Christ." Thus, the church defends the rights necessary for "ensuring the life and health of workers and their families," such as a family living wage, health insurance, safe working conditions, and the right to unionize.

Pope Francis insists that all lives are sacred (Gaudete et Exsultate) and must be defended, including those "at the mercy of economic interests or indiscriminate exploitation" (Evangelii Gaudium). In his words, an economy that idolizes profits rather than prioritizing "dignified work" for all constitutes a form of "hidden euthanasia." Moreover, exploiting workers is a "mortal sin"

In short, Catholic teaching is clear: Workers' dignity and rights are a grave matter and are a life issue. In this election, one candidate, Donald Trump, fails to reflect Catholic social teaching on the dignity of labor. The other, Joe Biden, aligns much more closely with it.

Right to life and limb

As I elaborate in my contribution to Voting and Faithfulness: Catholic Perspectives on Politics, Trump has disregarded the right to life and limb of workers. To protect these rights, modern popes have urged the state, in accordance with the "principle of solidarity," to limit "the autonomy of the parties who determine working conditions" (John Paul II, Centesimus Annus). 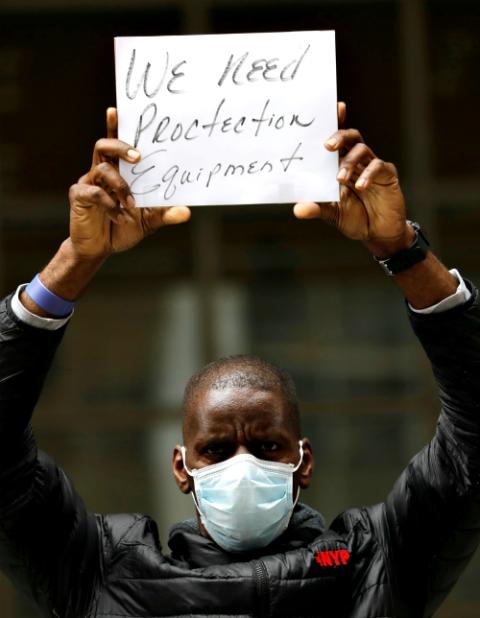 A health care worker takes part in a demonstration as part of a national day of action calling on federal and local authorities to provide more personal protective equipment and support outside New York-Presbyterian Medical Center in New York City April 9. (CNS/Reuters/Mike Segar)

Even before the pandemic, workplace inspections decreased (despite research indicating they save lives) and fatalities increased, dramatically among Black and Latinx workers.

The Trump administration also undermined regulations of workplace exposure to silica, beryllium and asbestos (banned in more than 60 countries), all known carcinogens to which millions of U.S. workers are exposed — killing thousands of them annually. While independent scientists and government experts decried the asbestos change, Russian asbestos exporters praised Trump, saying "Donald is on our side."

The Trump administration also took several steps to undercut the protection of victims of sexual assault, harassment or violence in the workplace.

Trump's radical anti-worker agenda prompted the attorneys general of six states to sue the Trump administration and helps explain why the 2020 ITUC Global Rights Index indicates the U.S. has systematic violations of workers' rights and ranks below Albania, El Salvador, Nepal and 59 other countries. These problems all appeared before COVID-19.

The COVID-19 pandemic represents one of the greatest threats to workers in U.S. history. Meanwhile, the Trump administration is weakening worker protections. Nearly 10,000 complaints have been filed against employers for inadequately protecting workplaces, yet only "a handful" have been reprimanded, the Economic Policy Institute said.

The administration corrupted the work of the Centers for Disease Control and Prevention, for example by softening and making discretionary the safety measures during the COVID-19 outbreak at the Smithfield Meatpacking Plant. More than 200 meatpacking workers nationwide have died since March; many of those lives could have been saved by requiring masks and social distancing in the plants. 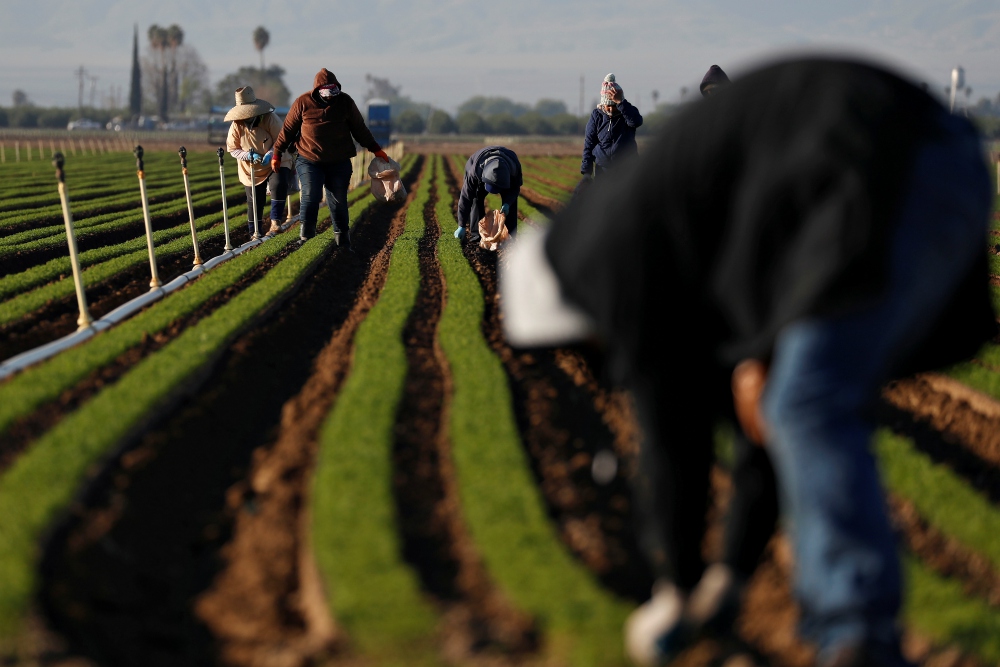 Farmworkers, who are largely Mexican and Central American immigrants and already had a fatality rate five times greater than all U.S. workers, have been deemed essential but left extremely vulnerable to COVID-19, often without health care.

Countless workers, including 1,700 health care workers, have died due to lack of personal protective equipment and proper safety precautions.

About 11.5 million workers do not have jobs, many facing hunger and eviction because the president botched the response to the crisis.

Biden has rightly criticized Trump's rollbacks of the Obama administration's workplace safety rules. Biden intends to reinstate them and "develop comprehensive strategies for addressing the most dangerous hazards workers encounter in the modern workplace."

He will also fix the Trump debacle of not having uniform safety rules that decrease the risk of COVID-19 workplace outbreaks. Given his record, workers believe that he will undue much of the damage Trump has done. 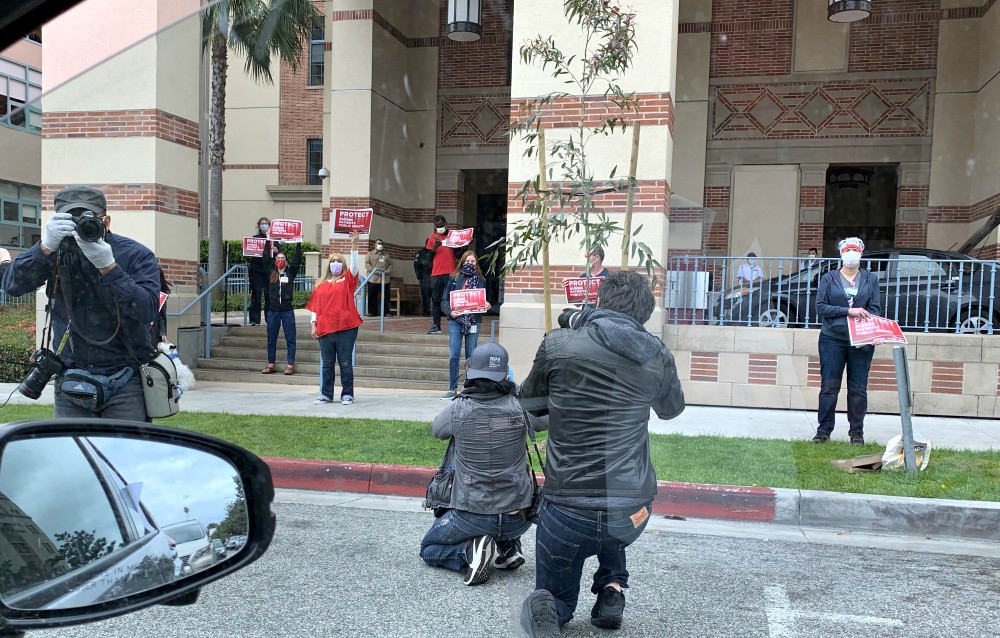 The wages and benefits of workers are a life and death matter. In the U.S., about 7 million people rank among the working poor. Research demonstrates U.S. low-wage workers have a life expectancy equivalent to Sudan or Pakistan. Raising the minimum wage to $15 in big cities would save thousands of lives. Increasing it by just a dollar would decrease the alarmingly high U.S. infant mortality rate (47th in the world, worse than Belarus and Cuba).

Yet Donald Trump, who paid far less in taxes than the vast majority of workers, opposes raising the federal minimum wage, even for essential workers during the pandemic. The president boasts about low-wage workers' wages rising, but this minimal growth — less than under previous presidents — has much to do with 20 states raising their minimum wages. Trump also weakened the Department of Labor rules for overtime pay and for joint employers, and eliminated protections against wage theft, all costing workers millions.

Joe Biden paid taxes fairly and supports a federal minimum wage of $15. His position reflects Catholic social teaching on the just wage, which must at least be enough to sustain workers' and their dependents' "material, social, cultural, and spiritual life" and some savings. 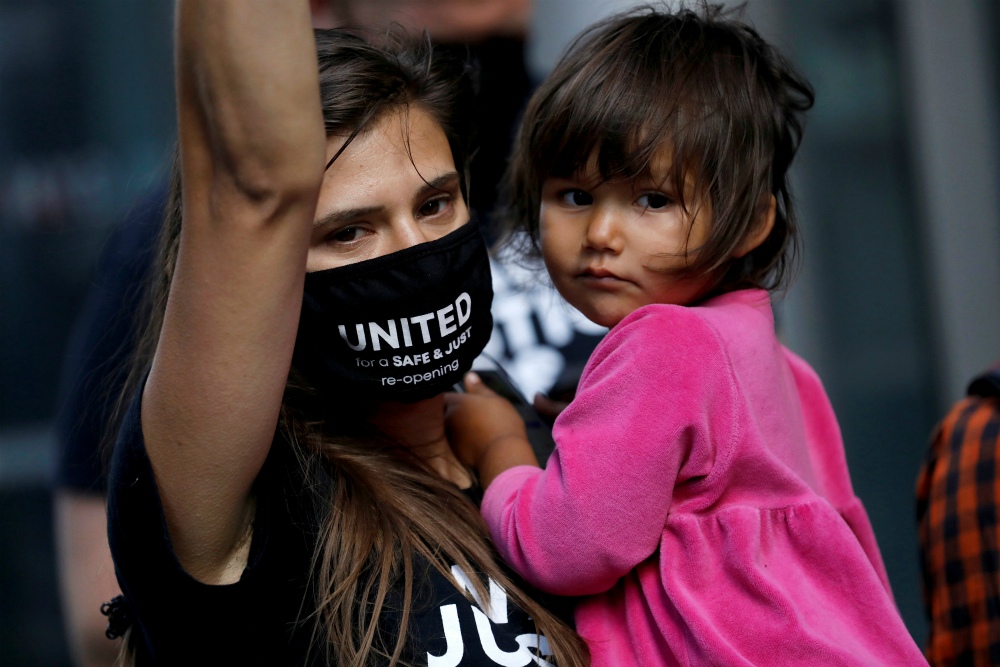 Trump has proposed an anti-family "budget-neutral approach to parental leave," forcing modest-income workers with bigger families to draw on their own retirement benefits and delay retiring.

By contrast, St. John Paul II encouraged societies to pay subsidies for the vital work that parents do in the home. Biden's caregiver plan, which includes paid parental leave, resembles the pope's by including a $5,000 tax credit for unpaid caregivers. Biden also supports the Pregnant Workers Fairness Act.

In addition, Biden agrees with church teaching that "health care is a right for all." The Affordable Care Act has already saved tens of thousands of lives, and the Biden plan will expand coverage for an estimated 15-20 million more people, sparing suffering and avoidable deaths. When more than 216,000 Americans have died in the pandemic, Trump wants to eviscerate the Affordable Care Act, eliminating health care coverage for approximately 20 million people.

Unlike Trump, Biden does not pit environmental concerns and job growth against one another. Rather, his plan to create millions of well-paying, union "green" jobs has been praised by workers and environmental groups alike. In this respect, Biden affirms Pope Francis' insistence on an integral ecology that acknowledges, "Work must be combined with the preservation of creation." 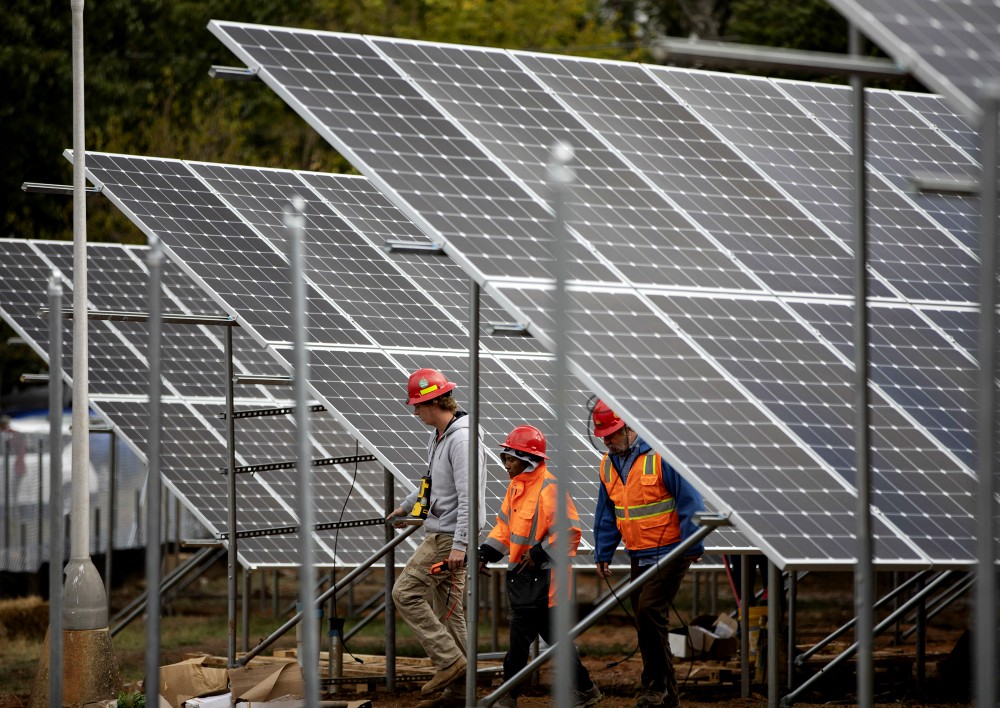 Workers in Washington are seen near solar panels Oct. 17, 2019, on the property of Catholic Charities of the Washington Archdiocese. (CNS/Catholic Standard/Andrew Biraj)

The right to unions and collective bargaining

Unionized workers have a better chance at a living wage, health care and the ability to maintain families. Therefore, the Catholic Church has long advocated for the right of all workers to form unions. John Paul II contended unions are a necessary "mouthpiece in the struggle for social justice." Francis argued unions must "unmask the powerful who trample the rights of the most vulnerable workers."

Trump's businesses had a record of unionbusting and recklessly squandering thousands of jobs. The president has continued his anti-union agenda, vowing to veto the Protecting the Right to Organize Act. He has weakened the ability of workers to unionize and seek redress of rights violations by decreasing the regulatory power of the National Labor Relations Board, gutting its regional offices and installing pro-business board members.

Trump also appoints anti-labor judges. Justice Neil Gorsuch and Justice Brett Kavanaugh have authored opinions that favor of corporations and undercut workers' rights. Legal and labor experts are decrying prospective U.S. Supreme Court justice Amy Coney Barrett's past rulings against workers and her potential to vote against the Affordable Care Act given her past criticism of it. 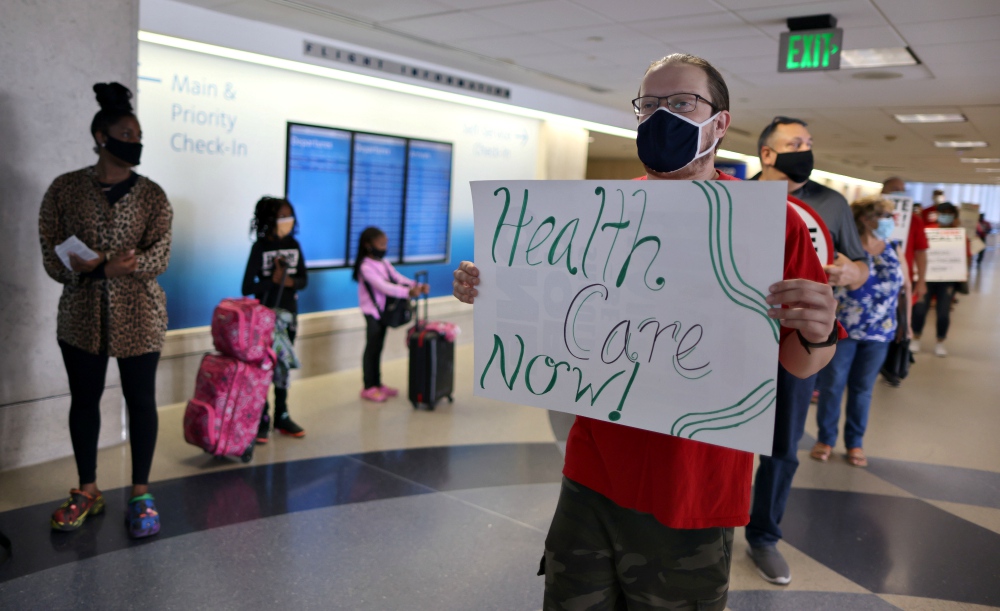 A person holds a sign as laid off LAX Airport workers protest for an extension of health care benefits by concessions companies in Los Angeles Sept. 24. (CNS/Reuters/Lucy Nicholson)

Joe Biden will "incentivize unionization and collective bargaining." He supports the Protecting the Right to Organize Act and proposes additional criminal liability for union-busting. The BlueGreen Alliance and almost all major unions — including postal workers, front-line federal workers, farmworkers, teachers and nurses — have all endorsed Joe Biden as the "clear choice on labor and workers' rights," in the words of National Nurses United.

Voting as a matter of conscience

As Catholics vote, they cannot ignore Trump's record on the right to life, limb and livelihood of workers, which, along with other reprehensible policies, demonstrates he is not a pro-life candidate, as Bishop John Stowe recently maintained. Catholics should also contemplate Biden's greater commitment to the mandates of Catholic social teaching on workers' rights.

As with other Catholics and pro-life evangelicals, my conscience dictates that there are additional "grave moral reasons" ("Faithful Citizenship") to vote for Biden, despite my strong rejection of his position on abortion. Realistically, Trump's promises to end abortion may be untenable. Moreover, Trump's divisive politics are a mortal threat to the Constitution, our democracy and the global rule of law. Trump's presidency has also incited a lethal resurgence of white supremacy, racism, and dehumanization of immigrants, including preplanned separation of children from parents and forced sterilization.

As Francis' new encyclical, Fratelli Tutti, teaches that borders have "limits" and cannot justify assaulting the humanity and rights of immigrants. The pope also said, "We cannot tolerate… racism and exclusion in any form and yet claim to defend the sacredness of every human life." 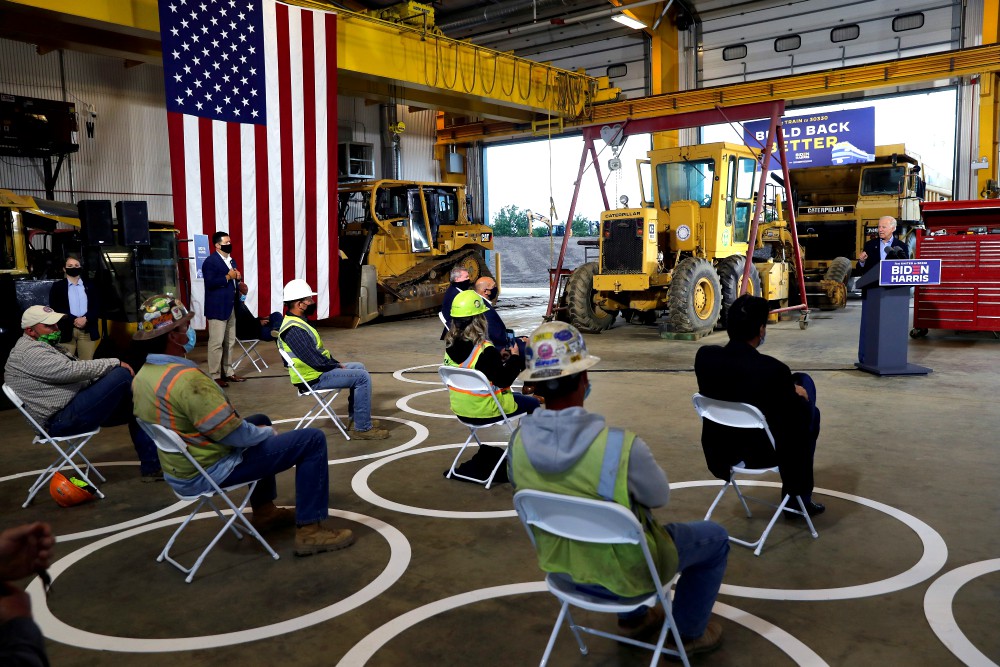 Trump's insidious politicization of science has caused tremendous suffering and death during the pandemic, as The New England Journal of Medicine editors contend. It also threatens the future of the planet, which is "the prerequisite for all human life," in the words of Bishop Robert McElroy.

Joe Biden does not embrace the fullness of Catholic social teaching; lamentably, neither party does. However, on many grave moral issues, including workers' rights, he can lead our country toward greater peace, unity, ecological well-being, recognition of human dignity, and the common good.