by Brian Roewe
Leaders
This article appears in the Election 2020 feature series. View the full series. 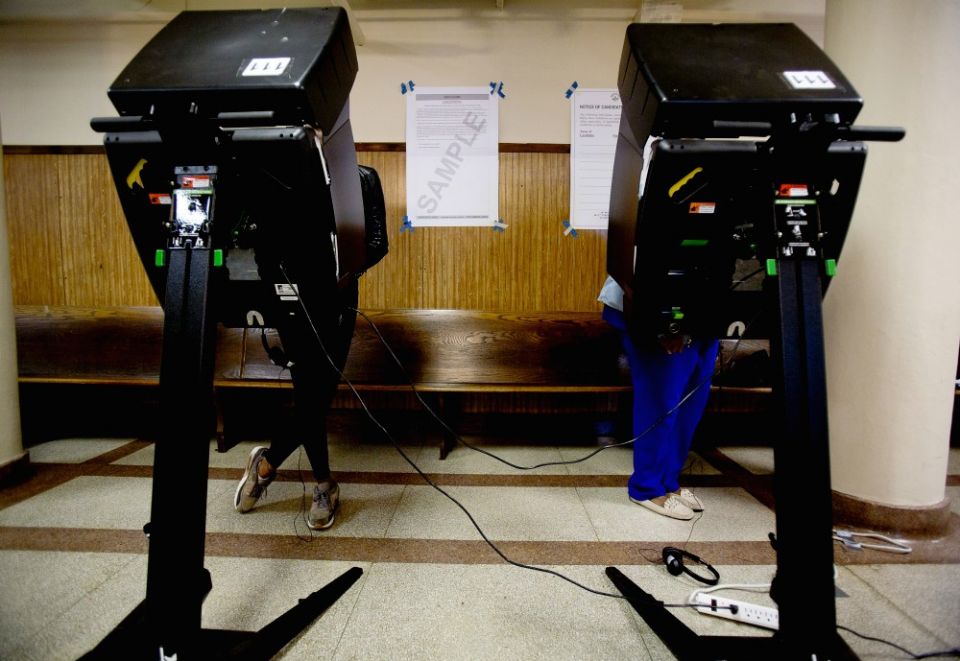 Pushing back against single-issue voting, the bishop of Lexington, Kentucky, said Catholics should consider concerns beyond abortion, such as the environment, when evaluating candidates for political office.

The comments from Bishop John Stowe came during a webinar Sept. 10 on Catholic social teaching and political participation hosted by the Catholic Climate Covenant. The event was the first of a five-part series for the Season of Creation (Sept. 1-Oct. 4) that seeks to equip Catholics with a basis of Catholic social teaching, including care for creation, to use in marking their ballot in the November elections.

At one point in the question-and-answer portion, a participant asked about the wording on abortion as "our preeminent priority" in the U.S. bishops' election-year guide on voting, "Forming Consciences for Faithful Citizenship."

Stowe said he voted against the inclusion of that language at the November 2019 bishops' meeting, calling it "a step backward" and confusing for Catholics.

"I do understand the logic of it being preeminent, because without the right to life, the other human rights don't come into existence. So I do understand it on one level. But unfortunately, it gives people the permission to think it's the only one that matters," Stowe said.

"And I don't think that was the intention of the document. It goes against other parts of the document that tell us not to be single-issue voters," he added, noting that Pope Francis has urged Catholics, including in his encyclical "Laudato Si', on Care for Our Common Home," to see the ways that many issues are interconnected.

When a participant later asked about the "quandary" of holding as their most important issues ending abortion and protecting the environment, Stowe responded, "They are both critical issues." An argument could be made for creation as the preeminent issue, he said, "because without the environment to sustain human life, you can't have human life."

Stowe added that in such difficult situations, it is also important to look at what office the candidate is seeking and what role they can play in effecting change on a particular issue.

"We've seen what the current president can do by withdrawing from an international treaty about protecting the environment and the effect that that has had immediately," he said, referring to President Donald Trump's move to pull the United States out of the Paris Agreement on climate change.

On abortion, Stowe said that "unfortunately" the interpretation of abortion as a right has not changed since 1973, despite multiple administrations frrom both major political parties controlling the White House. "So when we look at just the immediacy and the role of office and what effect they had, I think that can weigh in on that decision," he said.

Significant action in the next decade to reduce global greenhouse gases — cutting them nearly by half — is seen as paramount to meet the goals spelled out in the Paris Agreement to hold global warming between 1.5 and 2 degrees Celsius.

The Catholic Climate Covenant webinar series, the second held Monday, played out as historic wildfires blazed through the West and as the Gulf Coast braced for Hurricane Sally, the latest in a record-breaking hurricane season.

Climate scientist Katharine Hayhoe told webinar participants in the second session that it's not too late to act, but it must happen now.

Hayhoe compared the impact of greenhouse gas emissions on the planet to the effect of smoking on a person's lungs: Some damage is done, some more is inevitable and continuing the status quo will be far more devastating, but much can still be avoided by taking immediate steps.

"So when is the time to stop? The time is now. As soon as possible," she said.

Hayhoe urged attendees ahead of the 2020 election to use their voice and their vote to advocate for the kind of systemic change required to address climate change.

"A thermometer is not liberal or conservative," she said. "We need political parties of all stripes saying, 'OK, the science is real but we can disagree over solutions.' "

Hayhoe, an evangelical Christian whose husband is a pastor, referred to climate change at various points as "the ultimate pro-life issue" and "an everything issue."

How pro-life is defined was a topic during the first webinar, as well.

Stowe, who signed onto a letter urging the Democratic Party to revoke "abortion extremism" from its platform, repeated criticisms he's made throughout this year regarding attempts by Trump and his campaign to cast the president as "pro-life." 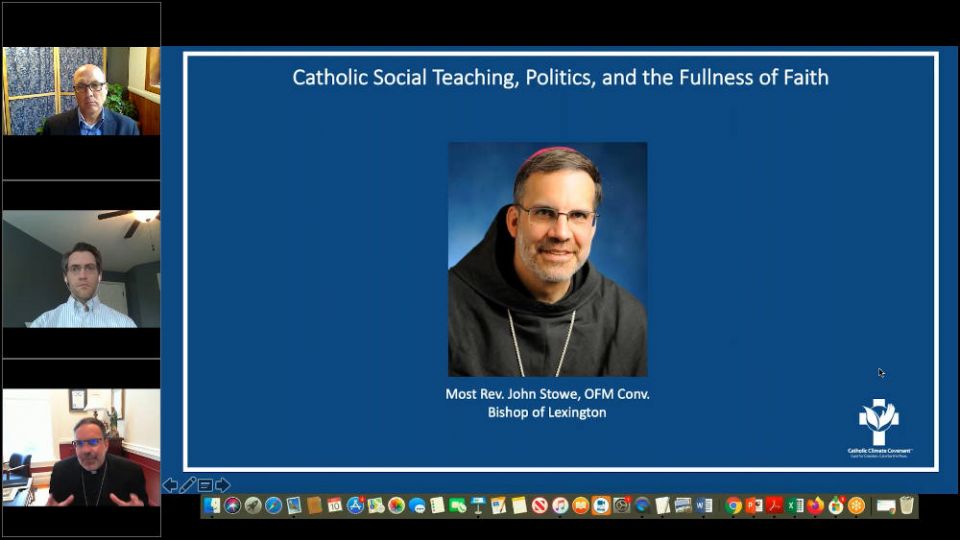 At left from top to bottom, Daniel Misleh of Catholic Climate Covenant, Dan DiLeo of Creighton University, and Bishop John Stowe of Lexington, Kentucky, are seen as Stowe speaks during a Sept. 10 webinar on Catholic social teaching and political participation. (NCR screenshot)

"I really resent the fact that the current president calls himself a pro-life candidate. He can make a case for being an anti-abortion candidate, but when he uses the language of pro-life, I found myself beyond offended by that," Stowe said.

"Nobody's pro-life if they separate children from their parents at the border, if they put people in cages, if they allow for the destruction of the environment, even in the handling of the COVID virus in the United States pit against each other for the necessary protective equipment at that time. It's all anti-human life and anti- those values," Stowe said.

The Trump campaign has sought to make abortion a key deciding factor for religious voters, including Catholics, in the presidential election against former Vice President Joe Biden, who is Catholic.

The Catholic Climate Covenant webinar series, titled "On the Common Good and Our Common Home," aims to help U.S. Catholics spark conversations about climate change and civic participation this election year, as well as on the centrality of Catholic social teaching in living out the church's mission.

In his opening remarks, Stowe made the case for why it is essential for Catholics to engage in politics. While he sympathized with people of faith who bristle at partisan politics from the pulpit or clerical endorsements, the Kentucky bishop said church teaching makes clear that for Catholics, living out their faith means engaging discussions about public policy in an effort to create a better world.

"I don't see how you can read the Gospels and come away thinking Jesus wasn't involved in politics," he said.

Stowe described politics as how societies determine who has power, how power is used "and from our Christian perspective, how we make sure that that power is used for the good of the greatest number possible, for the good of the many." He quoted from Francis' speech to Congress in September 2015, which the bishop attended, in which the pope called politics "an expression of our compelling need to live as one, in order to build as one the greatest common good."

Later in the Sept. 10 webinar, Dan DiLeo, director of Creighton University's justice and peace program, broke down Catholic social teaching as a blueprint for how Catholics engage in the public sphere. He stated the past three popes each have emphasized how caring for creation is an essential part of Christian faith and is closely linked to other issues, including those relating to life, as Pope Benedict XVI said in his 2010 message to the Vatican diplomatic corps: "How can we separate, or even set at odds, the protection of the environment and the protection of human life, including the life of the unborn?"

"We need to remember that all of these themes, and indeed the entirety of Catholic social teaching, is an integrated whole," DiLeo said.

EarthBeat | Environment, other issues beyond abortion are critical in voting, bishop says