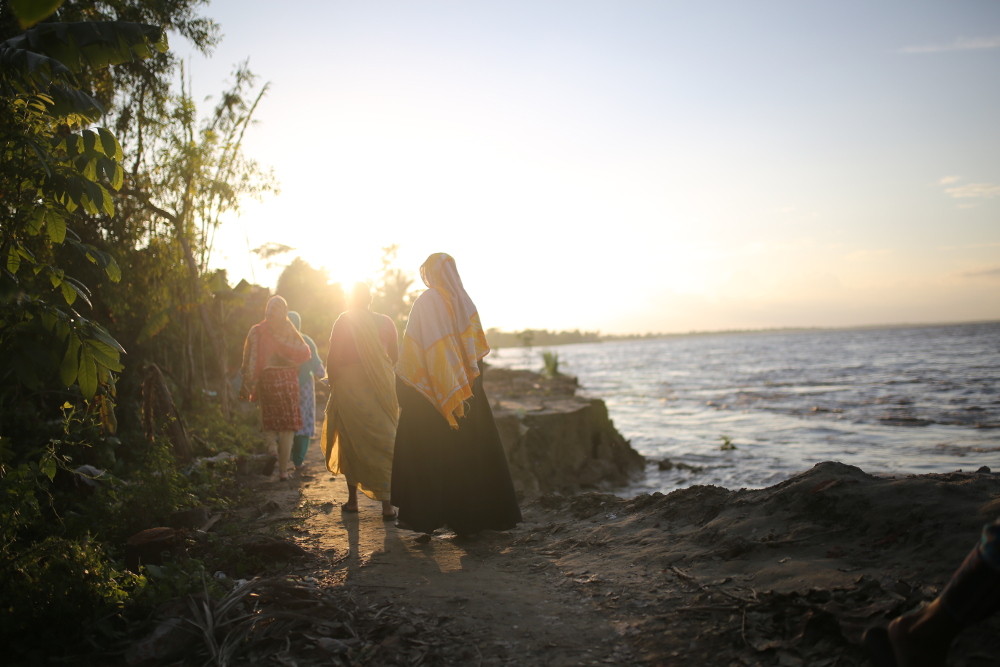 For many years, Maryknoll Fr. Bob McCahill has been sending an annual letter to friends at Christmastime, chronicling his experience living among the people of Bangladesh. Since 1984, NCR has published his annual letter in the Christmas issue. Following is an edited version of his 2018 letter.

As I sat in Anis' tea stall, another customer asked him to explain what I do in Bangladesh. (Bangladeshis quite often ask another person about me, even though I am directly in front of them and could easily answer their questions.) I listened to Anis' mostly accurate description of my activities. When I got up to leave, Anis held out his hand and I took it for a handshake. His intention, however, was other. He brought my hand to his heart to impart a blessing there — a custom perhaps introduced by Sufi preachers who spread their faith centuries ago in what is now Islamic Bangladesh.

Every few weeks, I bicycle to Shokhipur, a subdistrict of Shariatpur where I live, two hours distant. On one visit there, I met Arif, age 13, who rode on his mother's back from their village to our meeting place. During our conversation, they learned that his epilepsy might be alleviated, but not cured, if we would go to a hospital in the capital of Dhaka. After our conversation, the sight of Arif mounting his mother's back for their long walk home and of her staggering under his weight remains in my memory.

At a tea stall, I sat between two curious farmers and faced a benchful of observers who expected to be entertained by my interrogation. After we had examined the meaning of "love for others," the chief interviewer asked me: "Do you believe, as we Muslims do, that Jesus will come again?"

"Indeed I do," I responded, and added: "But we also believe that while we await his second coming we are to treat other persons as we would treat Jesus." Some of the men nodded their assent.

The room I live in is across a narrow street on which sits the neighborhood mosque. Twenty meters separate me from loud, amplified calls to prayer five times each day. Although not all who hear the invitation to prayer go to the mosque, all who hear the call are reminded to pray wherever they may be. In fact, their Prophet called himself a Reminder to recall the Creator often and pray.

A tired-looking man sat sipping tea at the tea stall beside the post office. He said nothing when I arrived but pointed to a bench where I could sit. I ordered tea, drank it down, and attempted to pay. The tired man waved me away; he would pay for it. I gestured by appreciation but no words passed between us.

When I took my bike to depart, he spoke up. "I am a Freedom Fighter." I asked his name. "Azahar Hossain Khan, freedom fighter," he replied.

Men of his age fought for the country's independence in 1971 while they were young, and they are proud to claim it. They include that heroic episode as part of their identity.

At the office of the Women's Committee, I stopped to speak with a mother about her daughter's condition. The officer-in-charge came out to meet me. Skipping any preliminary small talk, he wagged his finger at me and declared with mock accusation: "I know who you are and what you do for the handicapped. Everybody loves you!" No smiles accompanied his reprimand. He really told me off. Yet, his accusation was easy to endure.

One week after Rohingya refugees began pouring into Bangladesh from Myanmar, I volunteered to be useful in any way needed. My offer was politely declined. The Bangladesh government has received the newcomers, hundreds of thousands of them, in the name of humanitarianism. The Bangladeshis living in that area — the thinnest sliver of land in their overpopulated nation — received their fellow Muslims with as much help as they could provide. Camps were quickly established to settle the Rohingyas. Some few of them, however, upon reaching Bangladesh, attempted to push on across toward India.

Meanwhile, to a friend of mine in Shariatpur, 12 hours distant from the refugee camps, I inquired: "Have you seen any Rohingyas here?"

I urged him: "Give them cups of tea, as you have given me. For they are suffering much." By then, the influx had exceeded half a million refugees and was climbing toward a million.

In Kacheri Bazar, where I took breakfast one morning, the cook at the big skillet was a woman. That is quite an unusual sight in any village eatery. When the male customers were plying me with questions — and missing my explanations because of their unfamiliarity with the sort of service Jesus gave — she straightened out their thinking. Not only did this Muslim woman prepare good food, she had also grasped more completely than many what I do and why I do it. When I left the eatery, I complimented her on the taste of her fried bread. It was really her understanding, though, that most pleased me.

In Nayakandi village, I visited for the second time Muhammad Shaon, an 18-year-old lad who has spent his life on his back. Shaon is so weak, unable to sit, to grip, to feed himself, to defecate properly. He hears but his speech is garbled. No special chair or trolley would be of use to him. "Can I give you a radio?" I asked.

Declining the offer, he replied: "Just bless me."

As I left the house, his mother followed me. She, too, could think of nothing I might give. Meanwhile, I am searching for some way to be useful to the lad.

A version of this story appeared in the Dec 14-27, 2018 print issue under the headline: 'Give them cups of tea, as you have given me'.