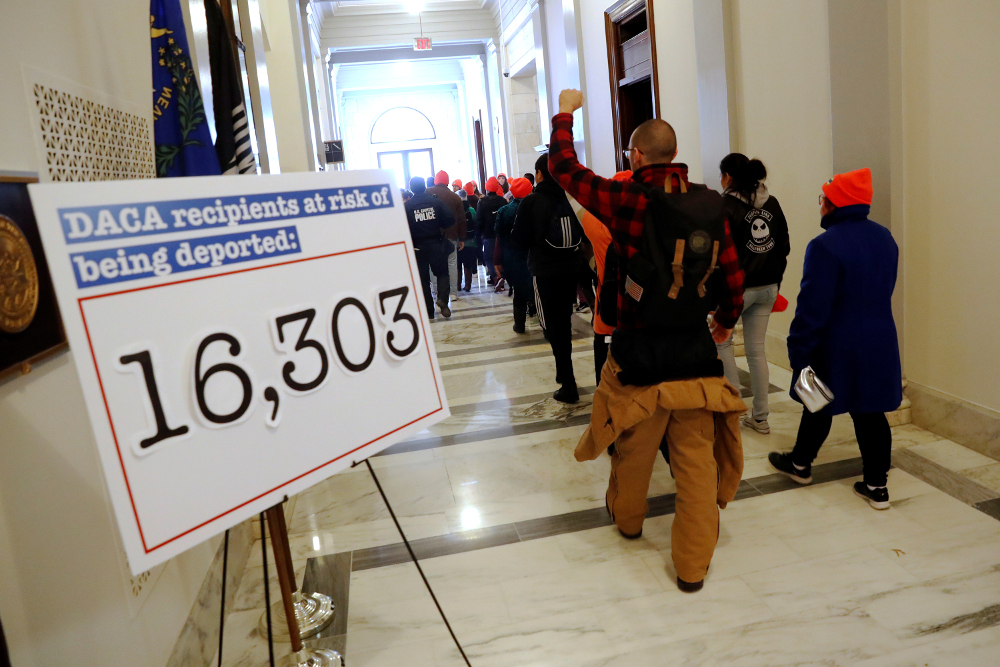 Demonstrators calling for new protections for recipients of the Deferred Action for Childhood Arrivals program walk through a Senate office building on Capitol Hill in late January in Washington. (CNS/Reuters/Jonathan Ernst)

Congress is expected to vote on the so-called "omnibus" spending bill by March 23. It is truly unfortunate that there is no political will or action to protect the estimated 1.1 million Dreamers and recipients of temporary protected status. Congress has sidestepped its responsibility to fix or has outright crushed the hopes of millions of legal, taxpaying residents by ending protected status for more than 320,000 people who fled natural disaster and political violence and found refuge as model residents in America.

Similarly, Congress has dashed the hopes of more than 800,000 young Dreamers by doing nothing to save the Deferred Action for Childhood Arrivals program. These young people, who were brought to the United States by their parents as children seeking a better life, have played by the rules as they were laid out for them and are contributing greatly to our economic and community life. They are lawyers, teachers, fathers and mothers. It is an affront to our long held American values of fairness and due process for these Dreamers to now be subjected to the possibility of deportation.

The omnibus spending bill now before Congress already includes funding for the enforcement regime that will move to deport Dreamers and their families along with temporary protected status holders. The bill also provides funding for two immigration programs that are largely viewed as benefiting the wealthy and advantaged — the H2-B "temporary work" and the EB-5 "investment" visa programs.

As Catholics and people of faith, we believe that all people have the same inherent dignity and should be treated equally and with love and mercy. Favoring the advantaged within our immigration policy is the wrong approach for our country.

Now is the time for every American to stand up for our common values of fairness, due process and, most importantly, mercy. We don't want to be a country that pulls families apart, deports young Americans, and sends refugees back to dangerous and unstable homelands. We are a country that welcomes "the stranger" and reaches out in love to the migrant.