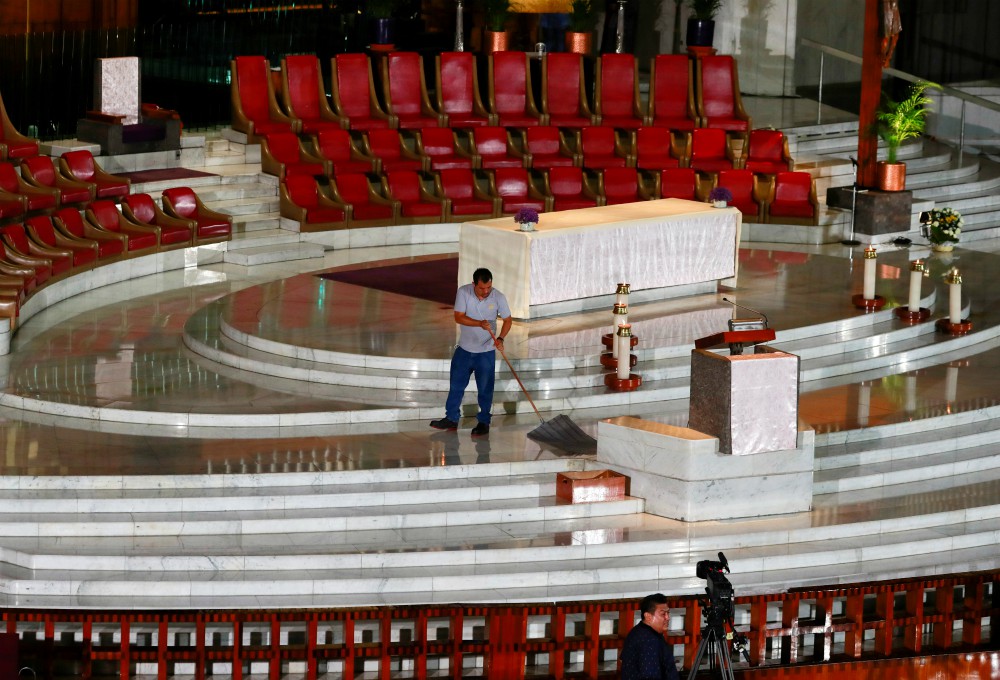 A worker cleans the floor before Cardinal Carlos Aguiar Retes of Mexico City celebrates an online Mass via YouTube and television at the Basilica of Our Lady of Guadalupe in Mexico City March 22. Some churches were closed Mexico as the spread of the coronavirus disease continues. (CNS/Reuters/Henry Romero)

Like the rest of the world, those of us in Mexico are trying to look for the silver lining as we face unprecedented restrictions on our freedom of movement. Yesterday, I took a walk in the park with my children, something I rarely do because I am either working or shuttling my kids from activity to activity, dressing or undressing them, feeding them or trying to get things done around the house. There is always something to do that gets in the way of being present — something that always gets in the way of just being with them.

Mexico has few confirmed cases of COVID-19 so far, only 585 with eight deaths as of March 27, but epidemiologists warn that the worst may still be yet to come.

In an attempt to minimize infections and "flatten the curve," local governments in Mexico have been closing schools and postponing events. That has left parents here, as in many other countries, at home with their children, trying to make the best of these unprecedented circumstances.

The first few days for my family, like for most families, were anxiety-producing — the overabundance of information, and disinformation, online wasn't helping. The stress of social isolation was already threatening to take its toll.

Even my dogs were stressed — our Rhodesian began sleeping on top of my 2-year old's baby doll and the German pointer would circle the girls like a shark as they ate at their kiddie table — hoping to steal any scrap of food she could get her paws on. Even the dog is hoarding.

As a family, we decided that getting out of the house to open spaces with our kids (and the dogs) was paramount in the coming weeks and months. And thus began a routine: Walks and bike rides with my 4- and 2-and-a-half-year-old daughters became a morning staple. Afternoons in the park kicking around a soccer ball — a good 20 feet away from other families that also decided to spend time outdoors.

And while the local jungle gyms are deserted (as they should be), I have seen fathers taking their children out on bike rides on the boardwalk in Veracruz; mothers kicking soccer balls around in parks. Everyone is trying to do their best.

I was speaking with my friend Adriana, a psychologist who lives and works in the trendy Roma Neighborhood in Mexico City and she told me, "There is a whole daily routine that my son misses because he's at school. He arrives and the spaces are swept and mopped, the food ready for him. Now he has the opportunity to observe that the spaces are continually being built and to be a participant in their reconstruction."

Another friend, Lorena, who is the owner and director of a Montessori school in the state of Campeche said, "My children are playing more with toys that they no longer paid attention to, and I'm enjoying watching them play more, being children, because I'm a mom who works all day. It's so nice to see how their minds can fly when they get bored."

Another positive outcome of this crisis has been the show in support for small, local businesses in Mexico. In the port city of Veracruz, people haven't stopped buying organic Oaxaca cheese and nopal and bean tortillas near Zaragoza Park in the center of town. In tiny family-owned restaurants across the country, loyal patrons still come to eat pozole and tacos, among other favorite dishes. They may not shake their neighbor's hand or kiss on the cheek as is the custom here, but communities are trying to keep local commerce going as much as possible while minimizing the risk of infection.

Everywhere you go, you see people with face masks. At the naval hospital in Veracruz, patients wait in line to wash their hands before even being allowed to enter the facility.

It goes without saying that going to church becomes a problem during a pandemic. In a country of more than 120 million people nearly 85 million are Catholics. The local churches have stayed open to attend to the spiritual needs of the population but there are few parishioners. Most of those who do come to pray come equipped with face masks and antibacterial lotion in hand.

On March 17, the Mexico City Archdiocese announced the exemption of the faithful from attending Mass on Sundays and holy days. Cardinal Carlos Aguiar Retes of Mexico City stated, "During the time of the health emergency, I exempt from attending holy Mass on Sundays and holidays those faithful who, in their conscience, consider it inappropriate to go in person to liturgical celebrations."

In the city of Monterrey in the northern state of Nuevo León, Archbishop Rogelio Cabrera López declared that "both Communion and sacramental confession be limited only to viaticum [for those approaching death] and patients in extreme situations," due to the COVID-19 coronavirus pandemic.

Cabrera, who is also president of the Conference of the Mexican Episcopate, said, "The specifics of this health emergency we are experiencing is being updated day by day and requires us to continue acting with prudence. The fruits of the Holy Spirit require the participation of enlightened human effort, strengthened by the grace of God."

I know I am not alone when I say that this crisis has brought out the best, and the worst sometimes, in many parents. We must resign ourselves to the fact that while most of us won't be able to teach our kids Latin and trigonometry, taking the time to play and be present with our kids is good enough for now, and that's OK.

Across the world, parents are trying to channel the creative, patient and empathetic parts of ourselves. A lot of what is going on is out of our control, but we can choose to make things better or worse. Let's keep faith and choose to make it better.

[Carli Pierson is a human rights attorney and freelance writer living in Mexico.]