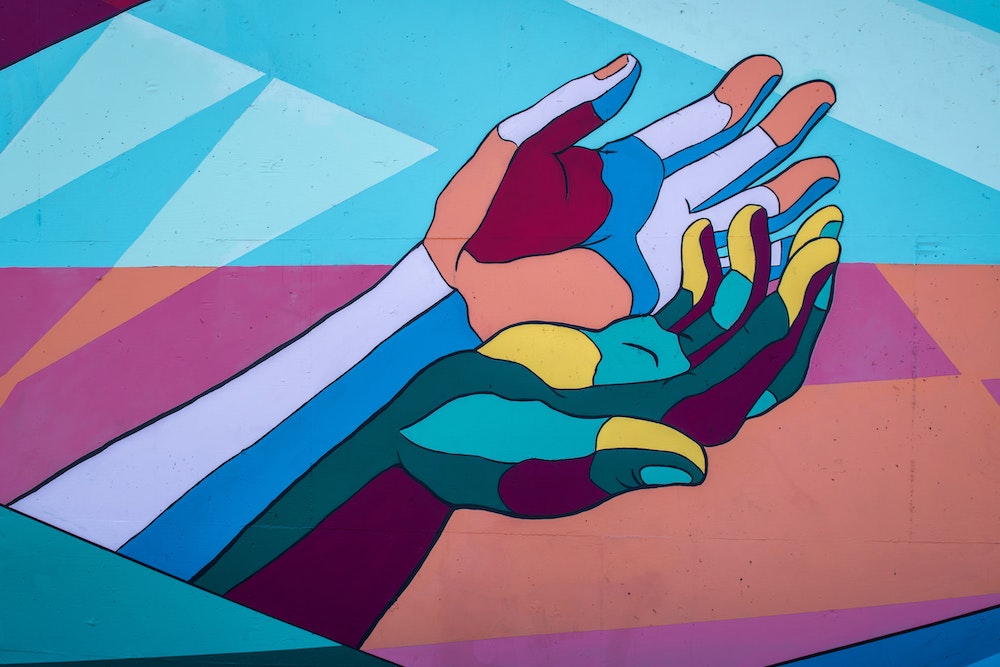 Photo of a mural of multicolored hands (Unsplash/Tim Mossholder)

"Umuntu ngumuntu ngabantu." This saying exists in variant forms in Southern Africa's bantu languages and translates as, "A person is a person through other persons" or ,"I am because we are."

Strikingly, Pope Francis' encyclical Fratelli Tutti contains an equivalent: "Each of us is fully a person when we are part of a people; at the same time, there are no peoples without respect for the individuality of each person" (Paragraph 182). In other words, we are "brothers and sisters all" (8).

Francis credits South African Anglican Bishop Desmond Tutu, among others, as an inspiration for his encyclical (286). Tutu is the main proponent of Ubuntu, an African humanist philosophy based on a culture of sharing, openness, mutual dependence, dialogue and interpersonal encounter. In Ubuntu, human existence reaches fulfillment as part of whole, society thrives on a common humanity, and forgiveness and reconciliation are prerequisites for preserving social harmony.

Francis' twin ideas of fraternity and social friendship underscore the urgency of Ubuntu in our present-day context, where the fabric of humanity is riven by atavistic conflicts, ideological division, isolationist paranoia and political polarization that take a catastrophic toll on the weak and vulnerable (18-19).

Devoid of a common uniting horizon, our ancestral fear of others drives us to build walls (26-27, 37, 41), thereby weakening our belonging to a common family and eviscerating our dream of a common purpose (30). Yet we are in this together (35); hence the imperative of building a community of solidarity and belonging.

"Mountains don't meet, but people do," says a Swahili proverb. A foundational premise of Ubuntu recognizes the centrality of encounter with the other. For Francis, fraternity rests on a culture of authentic encounters whose precondition is creative openness to the other (50).

Mutual openness, sadly, is assailed by a toxic digital communication saturated in social aggression, verbal violence and ideological myopia. The result is a virtual closed circuit connected by shared fear and hatred for the other (42-46).

Francis proposes a new path toward a culture of fraternity founded on an "encounter of mercy" (83). Drawing on the parable of the good Samaritan, he underscores the responsibility of love for others based on our shared Ubuntu. Such love builds a universal fraternity beyond considerations of its recipients' status, gender, origin or location (107, 121).

Universal fraternity entails suffering and requires time (48, 63) to forge a new social bond of solidarity that tends the vulnerability and fragility of others (66-69, 115). Francis likens this community to a polyhedral reality composed, not of isolated monads (111, 143-5), but as "a family that is stronger than the sum of small individual members" (78).

This reality exemplifies Ubuntu par excellence because it is cemented by an inclusive social love that transcends narrow barriers, interests and prejudices (83).

For Francis, the radical mutuality of Ubuntu is achievable through love without borders that transforms humanity into a community of neighbors without borders. Like Ubuntu philosophy, Francis argues for a social premium on rights and duties on account of the relationality of humanity, whose deepest manifestation is the ability to transcend the self and create a solidarity of service of others (87, 88, 111).

Francis' social love goes beyond the immediacy of neighborliness; it is expansive and enriches the lives and existence of others. This kind of love manifests as hospitality because it welcomes and values others for who they are (90-93), recognizes every human person as an "existential foreigner" with an incontrovertible moral claim on our care (97).

This expansive love forms the basis of an inclusive social friendship and borderless fraternity (94, 99). Far from being a leveling of difference or "false universalism" devoid of diversity (100), or worse, a closed group of like-minded "associates," fraternity, together with liberty and equality, offer a strong antidote to the virus of individualism (105).

If "I am because we are," then true fraternity leaves no one behind (108) because we are saved together and are responsible for the life of all (137).

"If my neighbor's house is on fire, I cannot sleep peacefully," says another African proverb. In the spirit of Ubuntu, genuine fraternity eschews a "local narcissism" that constricts the mind and heart (146-147). Authentic fraternity creates a family of nations, based on hospitality and gratuitousness (139, 141); it recognizes the rights of all peoples, communities and groups in private and social spheres (118, 124, 126).

In Francis's moral vision, the litmus test of the authenticity of fraternity is whether it welcomes, protects, promotes and integrates migrants, who come, not as nuisance or burden, but as gift and blessing (129, 133).

As Gospel-inspired virtues (277), fraternity and social friendship are antitheses of pathologies of politics like populism, nationalism and neoliberalism that negate the very meaning of "people," which is "open-ended" (160). Unlike these deleterious specimens of politics, the culture of encounter prioritizes multilateralism over bilateralism (174). 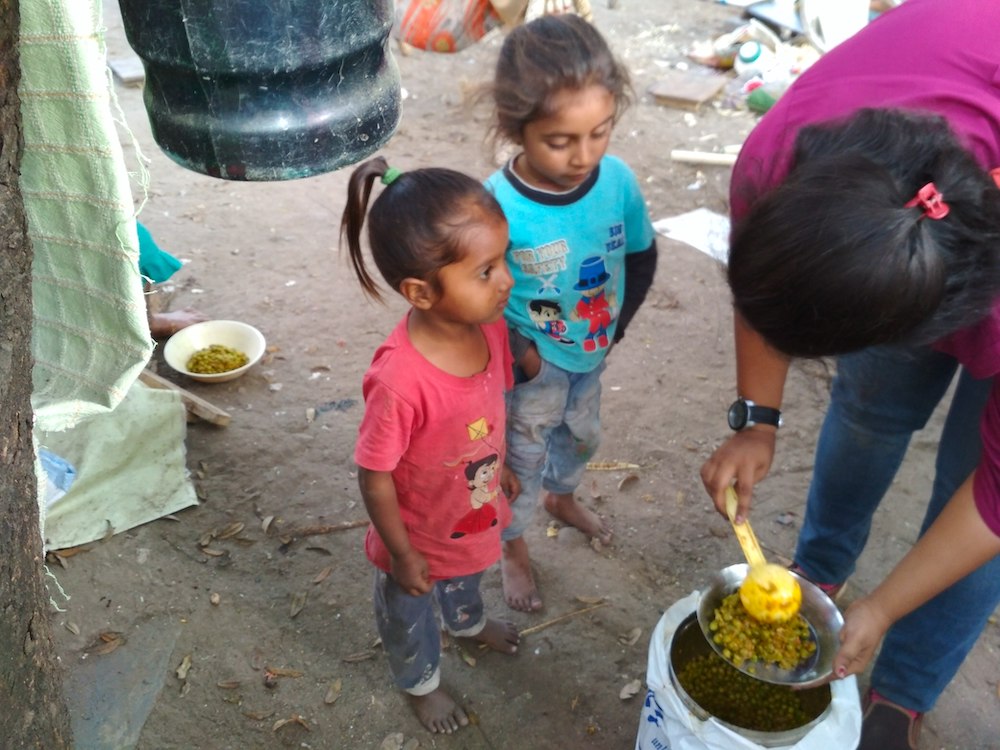 Children receive a meal from "Robinhood army," which collects food from hotels and restaurants in India to give to people who need it, pictured February 2019. (Wikimedia Commons/Rajesh)

Politics is healthy when it serves the common good and is animated by charity as its "spiritual heart" (180, 186). Political charity translates as "social love" founded on truth and the common pursuit of solutions to pressing problems (183).

Universal fraternity and social friendship connect the local and the global in a mutually beneficial relationship (142). Cultural rootedness presumes openness to an encounter with the other, either as peoples, cultures or countries. Cultural hospitality engenders communion and mutual dependence of nations (146-9).

Besides encounter, another synonym of Ubuntu is dialogue. Dialogue promotes social friendship because it respects the difference of opinions and points of view. Dialogue is open to others, recognizes our shared belonging and is animated by the common pursuit of truth, the common good and service of the poor (205, 230). On it rests the possibility of peace based on truth (228).

This culture of dialogue and encounter transcends differences and divisions; yet it is inclusive of all and offers new possibilities and processes of lifestyle, social organization and encounter (215-217; 231). As a form of kindness, social friendship makes a preference of love for the poor, vulnerable and the least (224, 233, 235).

As mentioned, Ubuntu prioritizes forgiveness and reconciliation, especially when wrongdoing has sundered social harmony. Francis agrees: Social friendship values forgiveness and reconciliation, not as mechanisms for forgetting or condoning injustice and oppression, but as means of resolving conflict through dialogue (241, 244, 246, 251). As Tutu says, the pursuit of justice has "no future without forgiveness." (cf. FT, 250, 252).

Fratelli Tutti by any other name would smell as sweet as Ubuntu.

[Agbonkhianmeghe E. Orobator is a Jesuit priest, theologian and president of the Jesuit Conference of Africa and Madagascar.]