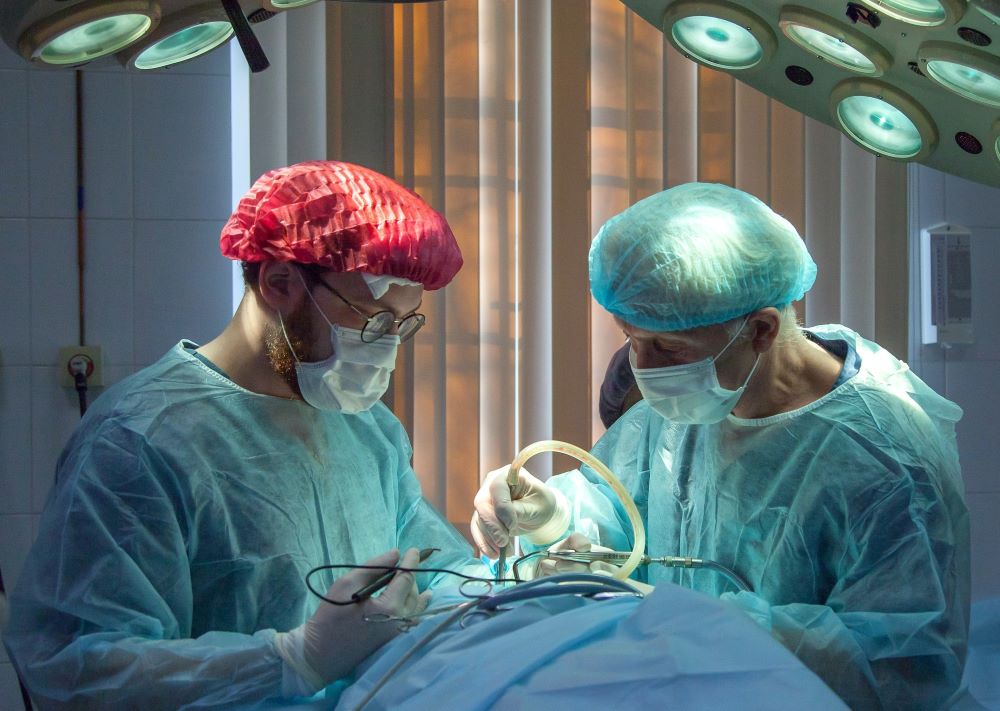 On a Wednesday evening in September 2022, I could no longer sit comfortably on a chair. For two days, I had wondered what could be causing so much discomfort, having recently found out I was seven weeks pregnant.

That night, the discomfort became dire, so I texted my husband, a faculty physician who was teaching a class in the emergency department, and called an ambulance. As I waited on our porch, vomiting, our cat crouched next to me until the paramedics arrived.

When my husband met me in the emergency department, I was writhing in pain, too uncomfortable to transfer to a wheelchair, as we waited for a room to free up. I repeatedly asked for pain medication to tolerate any procedure needed for a diagnosis. During the hours I waited, my husband bent over the bed with his face in his hands, as I said repeatedly, "God, please help. Please, please help me."

I prayed that I would not die and that I would make it through whatever this was. I felt the calm of God's assurance, and the intercession of all my deceased loved ones, that I wouldn't die. After receiving pain medication and an ultrasound, they were finally able to give me a diagnosis: a ruptured ectopic pregnancy requiring immediate surgery.

Before my experience, I found the reasoning for the licit use of methotrexate abundantly clear. Now, I see it as both clear and compelling

My husband later told me that when they wheeled me to the operating room, it was the only time he has said goodbye to a relative before a procedure feeling no certainty about the outcome. In the seven years we've known each other, this was the only time I've ever witnessed him cry.

The surgeon later told him that when they opened my abdomen, all they could see was blood. Over 1 liter of blood covered my organs from a leaking fallopian tube, where the embryo had tried, unsuccessfully, to move through. Over two weeks, I had learned I was pregnant, experienced this loss, faced life-threatening complications and underwent high-risk surgery.

When we met with the compassionate surgeon at my six-week follow-up, she asked how I was doing, and it was easy to intuit she was concerned about more than my physical health.

"I never want to go through that again," I told her. She went on to say that while she could not guarantee I would not have another ectopic pregnancy, she felt she could say I would never have to go through that again. I knew what she meant: an ectopic pregnancy left to advance on its own toward life-threatening circumstances. From then on, I would get "the golden ticket" as she called it: immediate care and surveillance from the moment I had a positive pregnancy test. It meant that if I was found to have another ectopic pregnancy, it would be treated immediately.

The drug I would need to consent to use is methotrexate, normally a cancer drug, which targets rapidly dividing cells, including the trophoblast and the resulting beginnings of a placenta, a vital organ that supports the embryo. Catholic health care guidelines do not debate whether to treat ectopic pregnancies, which are never viable and are always life-threatening to the mother. However, there is a theological debate about the means to treat them.

The magisterium has not officially ruled on the use of methotrexate in ectopic pregnancies. It is debated as licit (a necessary intervention in a life-threatening circumstance for the mother — an appropriate use of the principle of double effect) and illicit (targeting the trophoblastic cells at the site of implantation, thereby acting as an abortifacient). Catholics are called to make a conscientious and informed decision, absent any official statement.

The issue of life-threatening pregnancy complications and death are not new to me. I am a public health researcher focused on reducing maternal mortality in America. Eighty percent of maternal deaths in the U.S. are preventable, particularly among Black women who are three to four times more likely to die than white women. A lifelong pro-life Catholic, I have also been a birth doula for over a decade.

Before my experience, I found the reasoning for the licit use of methotrexate abundantly clear. Now, I see it as both clear and compelling. Expectant management, a form of "wait and see," as well as removing my remaining fallopian tube, leaving none, after an experience like mine is not only anxiety-inducing but also unethical in my mind.

Failing to act early in a situation that threatens one's life in a way that is immediate, minimally invasive and leaving most of the body intact puts the church in jeopardy when it comes to the issue of maternal mortality in America — especially since the church has reiterated its care for women in light of the Supreme Court's June decision in the Dobbs case,.

And this is not new territory. Catholic health care systems have been at this juncture before, with lawsuits being brought against them for not intervening soon enough when a woman presents as miscarrying at a Catholic hospital.

After Dobbs, the world is watching to see if the Catholic Church can make good on its promise to double down on its care for women. Being on the right side of issues like maternal mortality and setting a goal that there are no maternal deaths at any Catholic hospitals across our nation, where Black women are more likely to receive their care, lend credibility to this promise.