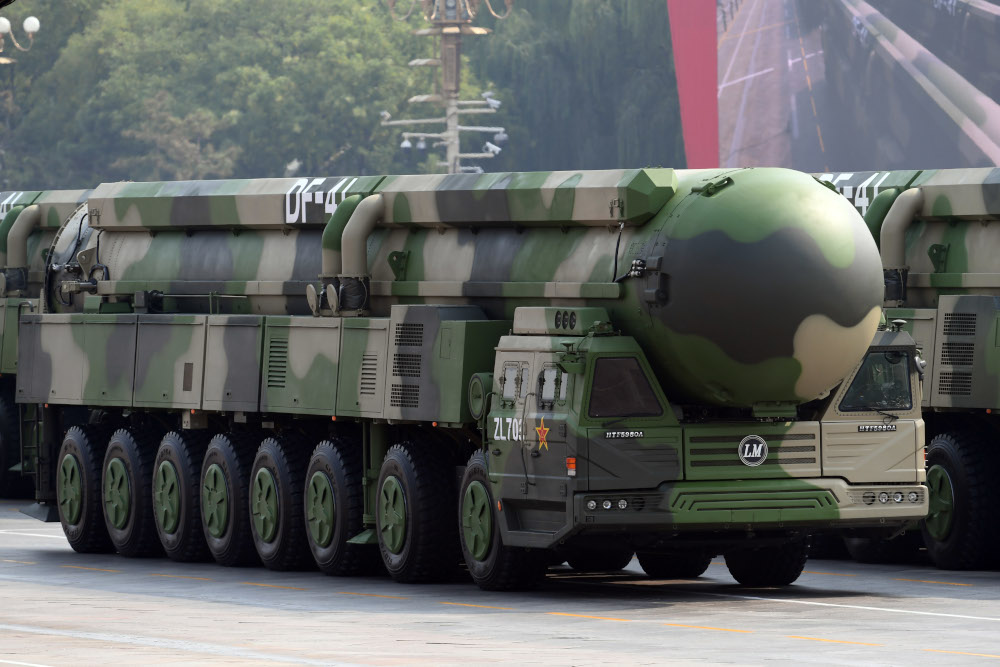 Seventy-five years after the U.S. committed the unspeakable crime of using nuclear weapons in Hiroshima and Nagasaki, Japan, in 1945, a historic milestone has finally been achieved: Nuclear weapons have been declared illegal under a new United Nations treaty. On Oct. 24, the Treaty on the Prohibition of Nuclear Weapons (TPNW) reached the 50-nation ratification threshold needed for entry into force. In 90 days, on Jan. 22, 2021, the treaty will go into effect.

Eighty-four countries have signed the TPNW, and legislatures of 50 countries have now ratified it. Advocates are confident that the remaining signatories will continue to add their ratifications to the agreement. However, the TPNW is not binding on those nations that refuse to sign it. The U.S. and the world's eight other nuclear-armed countries — Russia, China, Britain, France, India, Pakistan, North Korea and Israel — boycotted the negotiations that created the TPNW and have shown no inclination to accept it.

Three years ago, 122 nations adopted this landmark treaty. According to the International Campaign to Abolish Nuclear Weapons (ICAN), the 2017 Nobel Peace Prize recipient who helped spearhead the TPNW:

On July 7, 2017, following a decade of advocacy by ICAN and its partners, an overwhelming majority of the world's nations adopted a global agreement to ban nuclear weapons. … Prior to the treaty's adoption, nuclear weapons were the only weapons of mass destruction not subject to a comprehensive ban. The TPNW fills a significant gap in international law. It prohibits nations from developing, testing, producing, manufacturing, transferring, possessing, stockpiling, using or threatening to use nuclear weapons, or allowing nuclear weapons to be stationed on their territory. It also prohibits them from assisting, encouraging or inducing anyone to engage in any of these activities. A nation that possesses nuclear weapons may join the TPNW, so long as it agrees to destroy them in accordance with a legally binding, time-bound plan. A nation that hosts another nation's nuclear weapons on its territory may join. …

U.N. Secretary-General Antonio Guterres stated that the TPNW's "entry-into-force is a tribute to the survivors of nuclear explosions and tests, many of whom advocated for this treaty." It is "the culmination of a worldwide movement to draw attention to the catastrophic humanitarian consequences of any use of nuclear weapons. It represents a meaningful commitment towards the total elimination of nuclear weapons."

ICAN welcomed this historic moment declaring: "This is just the beginning. Once the treaty is in force, all state parties will need to implement all of their positive obligations under the treaty and abide by its prohibitions. States that haven't joined the treaty will feel its power too — we can expect companies to stop producing nuclear weapons and financial institutions to stop investing in nuclear weapon producing companies. How do we know? Because we have nearly 600 partner organizations in over 100 countries advancing this treaty and the norm against nuclear weapons."

Setsuko Thurlow, a survivor of the U.S. atomic bombing of Hiroshima and longtime ICAN worker declared: "I have committed my life to the abolition of nuclear weapons. I have nothing but gratitude for all who have worked for the success of our treaty. … This is the first time in international law that we have been so recognized. We share this recognition with other hibakusha across the world, those who have suffered radioactive harm from nuclear testing, from uranium mining, from secret experimentation."

ICAN Executive Director Beatrice Fihn stated: "Decades of activism have achieved what many said was impossible: nuclear weapons are banned. … The 50 countries that ratify this treaty are showing true leadership in setting a new international norm that nuclear weapons are not just immoral but illegal."

Pope Francis looks at a photo showing the destruction of an atomic bomb during a visit to the Jesuit-run Sophia University in Tokyo Nov. 26, 2019. (CNS/Vatican Media via Reuters)

The TPNW entering into legal force could not come at a more critical time. In January of this year, The Bulletin of the Atomic Scientists turned the "Doomsday Clock" to 100 seconds before midnight due to the existential dangers posed by nuclear weapons and climate change amidst worsening world tensions. Other recent developments have exacerbated the nuclear peril. Russia and the U.S. possess an estimated combined total of over 12,600 nuclear weapons, (90% of the world's nuclear stockpile), many of which are on hair-trigger alert. United States and NATO missile defense systems ring Russia and China, increasing already heightened tensions.

A new U.S. Space Force has been created to attain military domination of space. The U.S. is committed to a 30-year upgrade of its nuclear arsenal at an estimated cost of $1.7 trillion, money that should instead be spent on urgent human needs. Additionally, the Trump administration has threatened to use nuclear weapons against adversaries on several occasions. The U.S. withdrew from the Iran Nuclear Deal and the INF Treaty with Russia, and Pentagon policy makers have declared that a limited nuclear war could be waged and won, according to the Doctrine for Joint Nuclear Operations. Regarding renewal of the New START Treaty, the U.S. and Russia are currently locked in a stalemate. 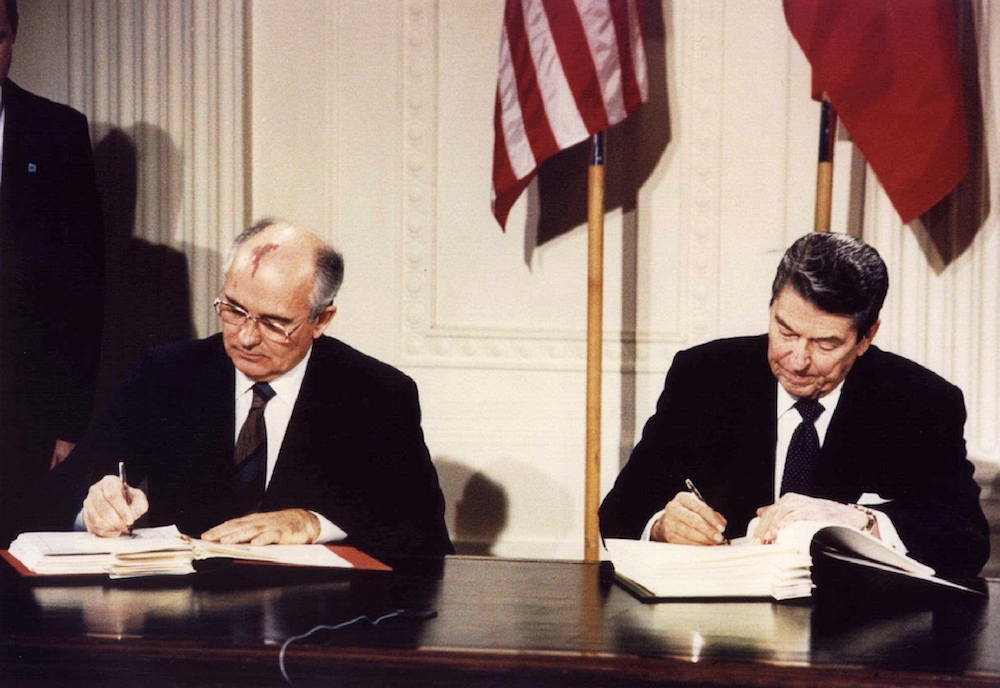 Soviet President Mikhail Gorbachev and U.S. President Ronald Reagan sign the Intermediate-Range Nuclear Forces treaty at the White House in Washington Dec. 8 1987. On Feb. 2, 2019, the U.S. announced its withdrawal from the INF treaty, followed by Russia a day later. (CNS/Reuters)

The Holy See has vigorously supported the TPNW. On Nov. 10, 2017, Pope Francis condemned the "possession" of nuclear weapons, something no previous pope has ever done. During his visit to the Peace Memorial in Nagasaki on Nov. 24, 2019, Francis expressed the horror of the effects of the atomic bomb attack on the city on Aug. 9, 1945. "We must never grow weary of working to support the principal international legal instruments of nuclear disarmament and non-proliferation, including the treaty on the prohibition of nuclear weapons," he said. Visiting Hiroshima that day he said, "The use of atomic energy for purposes of war is immoral, just as the possessing of nuclear weapons is immoral."

Living as we are in a nation that legally sanctions nuclear weapons, what would Jesus have us do? The late Jesuit Fr. Richard McSorley answered this question, asserting It's a Sin to Build A Nuclear Weapon (the title of his 2010 book).

If the U.S. Catholic Conference of Bishops and all Christians take seriously the magnitude of the nuclear threat, the Gospel command of nonviolence and the admonitions of Francis and McSorley, we must disarm and implement the TPNW. What if the U.S. Catholic Church and all other Christian denominations took the lead in demanding that the U.S. ratify the TPNW? What if the churches called for the conversion of arms industries to non-military production, while advocating for full and just protection of workers' rights during the transition process? What if the churches called for complete financial divestment from all institutions involved with the nuclear weapons complex? What if the churches were to call on all Christians in the nuclear chain of command to refuse orders to use nuclear weapons? These efforts would go a long way to create the climate necessary to bring about real disarmament.

There are inspiring examples of Catholic peacemakers to draw on in this vital work for disarmament, including those now among the Holy Cloud of Witnesses: Dorothy Day, Thomas Merton, the Berrigans, Religious of the Sacred Heart of Jesus Sr. Anne Montgomery, Fr. George Zabelka, Archbishop Raymond Hunthausen, Bishop Leroy Matthiesen and Dominican Sr. Ardeth Platte. There is also the witness of numerous other Christian peacemakers, women's religious congregations and Plowshares activists, including the Kings Bay Plowshares 7.

Activists are planning an action on Jan. 22, the day the ban goes into effect. If the human family and Earth, our common home, are to survive, the U.S. and other nuclear nations must beat their (nuclear) swords into plowshares and ratify the TPNW. 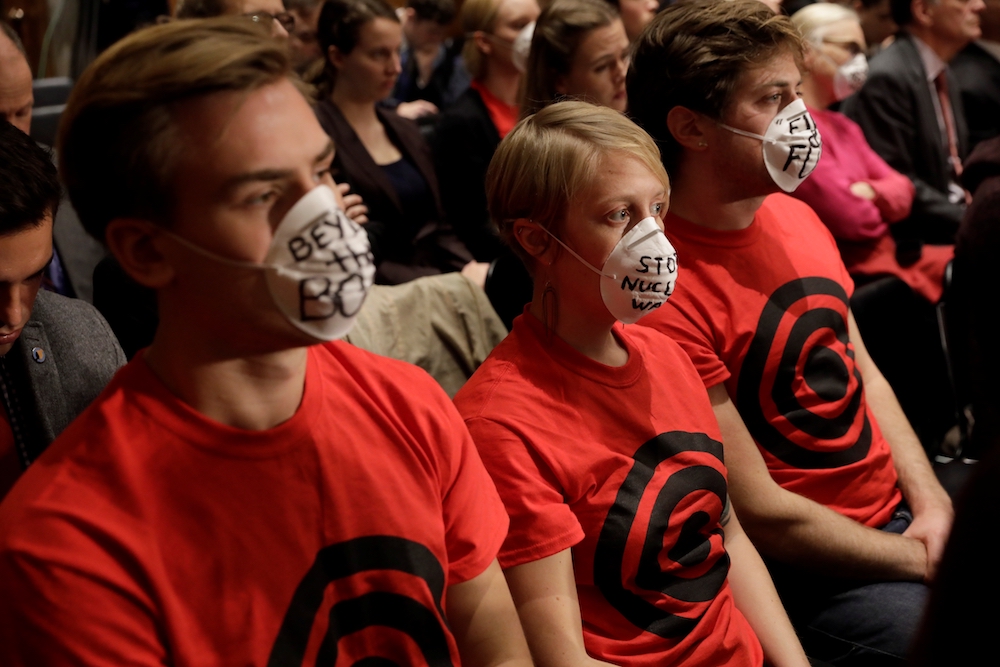 Nuclear disarmament proponents sit in a hearing of the U.S. Senate Foreign Relations Committee on Capitol Hill in Washington Nov. 14, 2017, about presidential authority to use nuclear weapons. (CNS/Reuters/Yuri Gripas)

[Art Laffin is a member of the Dorothy Day Catholic Worker in Washington, DC. He is co-editor of Swords Into Plowshares and author of the new edition of The Risk of the Cross: Living Gospel Nonviolence in the Nuclear Age]

Read this next: From two Dominican sisters: a master class in why the bomb is bad