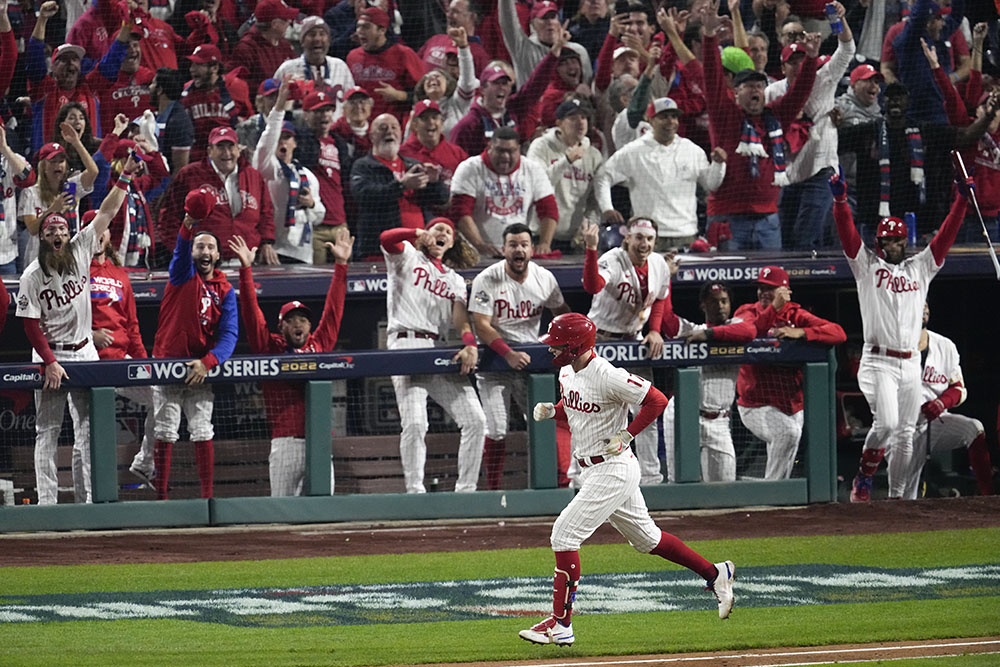 When I recently asked the theater actor and Jesuit priest Fr. George Drance how he decides what roles he'll take, he said he always looks for themes of redemption. Even if a play's characters do indecorous things, if there is hope and atonement in the piece, he's more open to accepting a part.

I was thinking about Drance's criteria during the start of the World Series last week, a matchup between the Houston Astros and the Philadelphia Phillies, because if someone wrote a play about the Astros, I don't think he would participate. There is no redemption story here.

In case you missed the biggest scandal to hit baseball since the steroid era, the Astros illegally used a video feed to steal opposing teams' signs during their 2017 World Series championship season and the year after. The team would have a staffer or player watch the catcher's finger signs on the feed, then bang a trash can in the dugout to send an audio signal to the Astro at the plate.

This systemic cheating was so brazen and in flagrant violation of the spirit of fair play that it cost both the team's manager and top executive their jobs.

If the Astros got what they deserved, they would be irrelevant cellar dwellers. Alas, good things can and do happen to bad organizations: The Astros have made it at least to the American League Championship Series six seasons in a row and to the World Series four times, including this year, an extended run of methodical, tainted, rotten dominance.

Maybe you think I'm being too hard on them. Weren't the perpetrators punished? Haven't they been playing clean for the past few years? Yes and no. None of the players who committed the crimes against baseball were disciplined, as they were given immunity for cooperating with the league's investigation. A number of the star players on those teams are still in Houston, and they were hardly remorseful after the scandal.

Resentment has continued to bubble across the country, and according to a fan survey, the Phillies are the preferred choice of most people living outside of Texas and some nearby states.

As for the innocent players who came to the team after the cheating had been uncovered, like 25-year-old Cuban slugger Yordan Álvarez, who is probably the best hitter in the world and pure delight to watch, they're all marked by the original sin of their Astro forebears, with Houston all-star veterans like José Altuve and Justin Verlander as the Adam and Eve in this analogy.

That might not be entirely fair, but who said original sin was fair?

In the opposing dugout this Fall Classic, you'll find the Astros' polar opposite. The Phillies are loveable, not detestable; generally mediocre over the past 10 years, not excellent. Heck, they barely made it into the postseason at all this year. They were bad down the stretch of the regular season and only qualified for the newly expanded playoffs as the third-best of three Wild Card teams. In any other postseason prior to this one, which increased the playoff teams from five to six per league, they would have been left out.

But ever since squeaking in, the Phillies have been a buzzsaw. They slayed the Cardinals, Braves and Padres en route to the World Series without really breaking a sweat. It's the sort of fantastic "pretty average team gets hot at the right time and defies expectations" story that the thrilling volatility of postseason baseball provides every so often.

Their older guys and impressive young players alike are having fun like they're on an episode of "Ted Lasso," sharing victory cigarettes and late-night karaoke sessions. SB Nation's Ryan Nanni summed up their vibe perfectly with this tweet: "I think what appeals to me about the Philly sports experience is that it's less 'wow this is the best assembly of talent and coaching,' but instead much more 'wow those rowdy guys just hopped the fence and found a bulldozer with the keys in it.' "

The Phillies' October magic carried over into Game 1 of the World Series last Friday night. They were trailing 5-0 after three innings. Against all odds, the Phillies stormed back against Astros ace Verlander and ultimately won the game, 6-5, in 10 innings.

The Astros responded in Game 2, posting a convincing 5-2 victory, but the Phillies blasted five homers en route to a dominating 7-0 win Tuesday night.

As I write this on Nov. 2, Ecstatic Poetry (Philadelphia) has at least a temporary upper hand over Cold, Inevitable Physics (Houston).

If you were neutral at the start of this column, you have probably become a Phillies fan for the rest of the World Series. But there are two people affiliated with the Astros you can genuinely feel happy for if they win the championship.

The first is Dusty Baker, Astros manager since 2020, an avuncular baseball lifer who has never won the World Series in his 30 years as a coach and manager that followed an impressive 19-year playing career. Imagining his smile lifting the trophy is not unpleasant.

The other likable Astro is Trey Mancini, whom Houston acquired from the Baltimore Orioles during a midseason trade.

Mancini, a University of Notre Dame alum from an Italian Catholic family, was the pride of the Orioles, a good hitter with loads of class who was one of the bright spots on several editions of last-place Baltimore teams. Before the 2020 season, Mancini was diagnosed with stage 3 colon cancer, and he missed that year due to surgery and recovery time. Mancini fought his way back to the Big Leagues and won the 2021 American League Comeback Player of the Year Award.

Even more impressively, Mancini has been a compassionate supporter of others facing the same disease, from texting fans of opposing teams out of the blue to starting his own foundation. Trey Mancini is worth rooting for no matter what uniform he's wearing.

Let's hope he hits a few home runs that are promptly overcome by the Phillies en route to victory. Because if it's redemption we're looking for, there is only one right way this World Series can end. So cheer for the South Philly underdogs, but don't be surprised if the arc of the baseball universe does not bend toward justice.