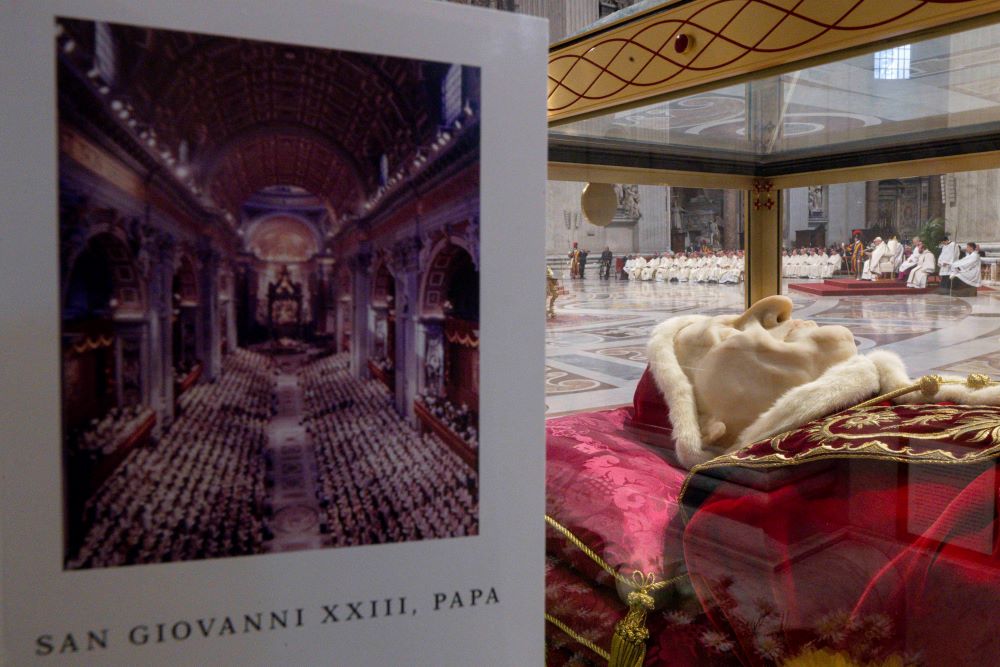 The program for the Mass celebrating the 60th anniversary of the opening of the Second Vatican Council and the feast of St. John XXIII is seen near a glass urn containing the body of the pope, who opened the council Oct. 11, 1962. (CNS/Vatican Media)

The 60th anniversary of Vatican II's opening prompted a flurry of commentaries in Catholic and secular outlets alike. The National Catholic Reporter's Michael Sean Winters offered his perspective, lining up clearly on the pro-conciliar team. Unfortunately, he also used the opportunity to take a swipe at theological reflection on gender, and he made an invective against issues related to nonbinary people specifically. His swipe needs to be answered.

I agree with much of what Winters wrote: that Vatican II is still being received by the church, and will continue to be for some time; that "in [Pope] Francis' hands, [the council] seems young again"; that many of the council's naysayers are simply a continuation of the "prophets of doom" whom Pope John XXIII rejected.

Where I part ways with him, though, is when he takes a digression to put theological reflection on gender in competition with the study of Vatican II and disparages nonbinary people along the way. Winters wrote:

.. . [T]here is a tendency on the Catholic left in this country to try and find religious rationales for attitudes and ideas with no Catholic pedigree, some of which are not reconcilable. In too many theology departments at our Catholic universities, there is more interest in non-binary sexual identity issues than in the documents of Vatican II. Inclusion should be a value, but it is not the only value, and when it is treated as such, it becomes not a value but a bulldozer.

Winters' piece stuck with me not because of an offensive line against progressive Catholics (it is not his first), but because his claim that theology departments focus more on gender than the documents of Vatican II distorts the council's legacy. I offer here a few points of reflection on why.

Meanwhile, Vatican II remains solidly central to Catholic theological reflection today, and the council's documents constantly appear in every subfield across the discipline. On the point about theological research, Winters is just wrong.

Second, while the line about nonbinary identities seems but a minor tangent, it needs to be said that such rhetoric is harmful. Nonbinary and trans people have become easy targets not only in society, but in Catholic spaces, too — including sometimes in allegedly liberal or progressive ones. Marginalized communities should never be the target of a quip. Catholic values demand a more responsible use of language and of respecting differences.

Third, let us hypothetically assume Winters is correct that a flood of nonbinary scholarship exists in Catholic theology departments, and that young scholars push ever-widening boundaries on gender identity discourse, informed by the latest scientific and social scientific research that is put in conversation with the church's teachings and tradition. Would this scenario actually be in opposition to the study of Vatican II, as Winters suggests?

I cannot claim that even the liberal council fathers, like Cardinal Leo Suenens, were trans-affirming. An expansive concept of gender would have been foreign to them. But we do know that these fathers were listening to theologians who were pushing the edges of Catholic theology at their time — people like Bernard Haring and Karl Rahner. The council fathers, and their theological advisers, took bold steps to engage the world. The church was mandated to seek justice and reconciliation. Church leaders, theologians and pastoral ministers all were encouraged to engage contemporary social questions, and they certainly didn't flippantly disparage them.

Theological reflection on the documents of Vatican II is essential. So, too, is living the council's mandate that we be attentive to the signs of our own times when doing theology, living the faith and pursuing justice. The council fathers could not specifically have envisioned how the academy and the faithful in the pews alike would take up LGBTQ+ issues, and yet this engagement toward new horizons is a conciliar path that many of them would bless.

Decades of theological research into issues of gender identity and sexual orientation have borne the fruits of justice and reconciliation, precisely the ends Vatican II intended for the church to pursue. Sixty years on, the Catholic Church is still receiving the council. Contrary to Winters' jibe, a key part of that reception must continue to be the growing appreciation of and respect for LGBTQ+ people in and by the church. Theology departments diving into nonbinary and transgender identities as they relate to the church's tradition is not juxtaposed against studying the council. Indeed, it is precisely Vatican II's mandate for us.