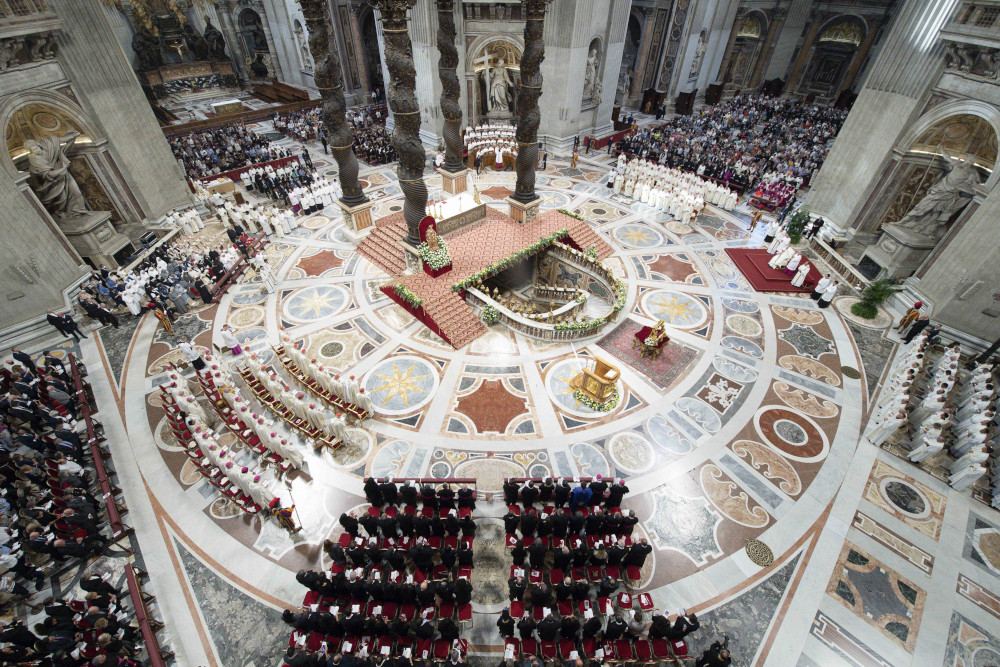 Pope Francis apparently wants to put me out of a job! In his sermon marking the 60th anniversary of the opening of the Second Vatican Council, he said, "If [the Church] should fail to rejoice, she would deny her very self, for she would forget the love that begot her," he said. "Yet how many of us are unable to live the faith with joy, without grumbling and criticizing? A Church in love with Jesus has no time for quarrels, gossip and disputes. May God free us from being critical and intolerant, harsh and angry!"

Now, the Holy Father has never been a journalist, so he doesn't know that without gossip, we wouldn't know where to start tracking down a story, especially at the Vatican! As for "quarrels" and "disputes," I am reasonably conflict-averse except when fundamental values are at issue, or when there is a bon mots waiting to be delivered, usually against a conservative critic of the pope, that is simply too delicious to pass up.

Setting aside "grumbling," which I agree should be avoided, I would point out to the Holy Father that there is criticism and then there is criticism. We are all tired of a kind of Catholic critic, found especially in the U.S., with a big chip on his or her shoulder, who insists on seeing the church through a highly myopic lens that permits no vision of anything good. These are the "prophets of doom" of which St. Pope John XXIII spoke in his opening address at the council.

Still, there is a higher form of criticism, one that engages and challenges authority, even papal authority, respectfully, in the context of affective communion always, but not afraid to ask penetrating questions or proffer inconvenient and contrary facts.

I do not mean to quibble, but the call to unity is one of several Christian vocations. And I agree entirely with the pope when, a few sentences before the passage quoted above, he said: "Yet let us be careful: both the ‘progressivism' that lines up behind the world and the ‘traditionalism' that longs for a bygone world are not evidence of love, but of infidelity. They are forms of a Pelagian selfishness that puts our own tastes and plans above the love that pleases God, the simple, humble and faithful love that Jesus asked of Peter." The point, I think, is that criticism should not devolve into sectarianism.

We Americans have always been especially susceptible to Pelagian feverishness, a consequence of the Calvinism of the dominant colonial culture. Our meritocratic instincts lead us to convince ourselves that we have achieved our good fortune in life, and if we can earn our way in this life, why not in the next too?

Does progressivism "line up behind the world"? Certainly, there is a tendency on the Catholic left in this country to try and find religious rationales for attitudes and ideas with no Catholic pedigree, some of which are not reconcilable. In too many theology departments at our Catholic universities, there is more interest in non-binary sexual identity issues than in the documents of Vatican II. Inclusion should be a value, but it is not the only value, and when it is treated as such, it becomes not a value but a bulldozer.

Does traditionalism "long for a bygone world"? There is a word missing: imagined. The world for which the traditionalists pine never existed. The pre-conciliar church was the church that too often collaborated with fascism when fascism was not a verbal tic on the campaign trail but a governing style complete with concentration camps and Gestapo. In this country, the pre-conciliar church was already busting out of the ethnic Catholic ghettoes that had kept Catholic identity so vibrant. By the mid-1950s, not the mid-'60s, middle-class Catholics were moving to neighborhoods no longer designated by the name of the parish church, a movement resulting as  much due to the GI Bill as anything said at Vatican II. Throughout the Western world, capitalism succeeded where Marxism had failed, overwhelming religious identity with a flood of consumerist idols. Look what was done to Christmas!

The pope points the way forward. "To be on the 'right' or ‘left,' rather than with Jesus? To present themselves as ‘guardians of the truth' or ‘pioneers of innovation' rather than seeing themselves as humble and grateful children of holy mother church?" the pope said, challenging sectarian tendencies on both sides. "That is not how the Lord wants us to be. We are his sheep, his flock, and we can only be so together and as one."

Humility and gratitude are two of the attributes that least characterize the contemporary church, at least in the U.S. Ours is a culture of self-assertion and grievance. If we want to overcome polarization, we need to cultivate our humility and gratitude.

Ross Douthat, an opinion columnist at The New York Times, marked the anniversary of the council by saying it was a failure, albeit a necessary one, and, in any event, it can't be undone. He writes: "...there is no simple path back. Not back to the style of papal authority that both John Paul II and Francis have tried to exercise — the former to restore tradition, the latter to suppress it— only to find themselves frustrated by the ungovernability of the modern church?" But in no meaningful sense can it be argued that Francis "suppresses" tradition. And does Douthat think the church was "governable" in the 18th century?

Douthat continues that there is no path back to "the kind of thick inherited Catholic cultures that still existed down to the middle of the 20th century, and whose subsequent unraveling, while inevitable to some extent, was clearly accelerated by the church's own internal iconoclasm." But there is no strict causality here, only a rightwing talking point.

Finally, Douthat worries that there is no path back to "the moral and doctrinal synthesis, stamped with the promise of infallibility and consistency that the church's conservatives have spent the last two generations insisting still exists, but that in the Francis era has proved so unstable that those same conservatives have ended up feuding with the pope himself." Is he aware of French monarchists frustrating Pope Leo XIII's efforts to get them to accept the Third Republic? Or of universal disregard for just war theory in two world wars? Where was this consistency?

Douthat is not only blinded by his own ideology but by his lazy acceptance of overbroad, pop-social science characterizations of divine realities. It is true that the post-conciliar era differed from what people expected or hoped. But, who would have thought in 1810, with the pope imprisoned, dioceses throughout the world left vacant, and most religious orders suppressed, that the 19th century would see an unparalleled flowering of spirituality?

Back to the Holy Father's speech. What Francis understands – and what every pope of the council starting with Papa Roncalli and including Montini, Luciani, Wojtyla and Ratzinger has understood – is that the dominant themes of the council were and are vitally necessary: a Christocentric focus, a retrieval of sound sacramental theology, pursing ecumenical and interreligious dialogue, and getting out of the defensive crouch that had been the church's stance towards the modern world. Do critics of Francis – and of the council – really think these changes were ill advised? That we would be better off if they had not been embraced at Vatican II?

Were there misfirings? Of course. For example, the renewal of liturgy was necessary, and at its center was a renewed focus on the Eucharist. No more could people recite their beads while the priest "said" Mass. But, in trying to focus on the Eucharist, we were too quick to toss overboard certain private devotions, which were a kind of spiritual architecture for many people. Now, especially because so many immigrants bring a rich devotional life with them, we are recovering that architecture, without sacrificing the centrality of the Eucharist.

Sixty years is a long time - except in the life of the church. It takes 100 years to receive a council, my great mentor Msgr. John Tracy Ellis taught us. Francis has brought the fruits of the council that ripened in Latin America to the center of the universal church, just as Popes Paul VI, John Paul II and Benedict XVI brought their gifts to bear on the reception of the council. Francis has also reinvigorated the post-conciliar church with fresh insights and perspectives.

The work of reception continues. The "prophets of doom" today are as tiresome as they were on the day Good Pope John opened the council. And it is the council itself that, in Francis' hands, seems young again.