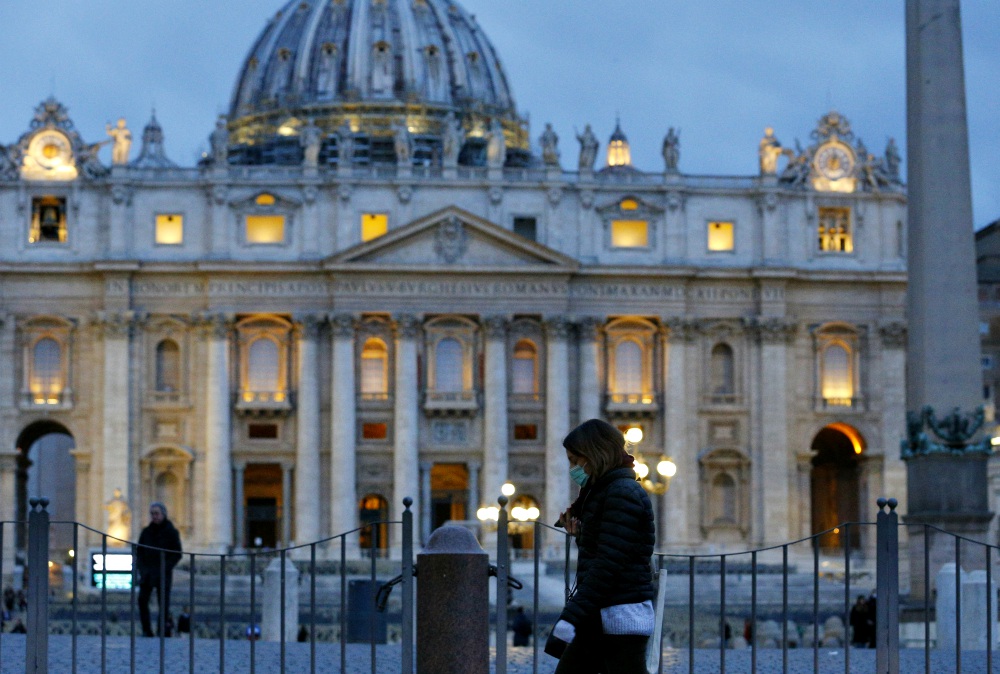 A woman wearing a mask for protection from the coronavirus walks outside St. Peter's Square at the Vatican March 9. (CNS/Paul Haring)

It's not what they say; it's the way that they say it. Documents and Scripture translations annoyingly border on gaslighting women. Not the big-league, drive-her-crazy gaslighting, just the subtle cognitive dissonance that slips into relationships large and small.

Cognitive dissonance includes saying one thing and meaning another. It exists, painfully enough, in the church. We know what the church says, but we know what it does.

You have to wonder, are women involved in a toxic relationship with the church?

Maybe no, maybe so, but I think women are tired of hearing they should have "a more incisive presence in the church" and more positions of responsibility, etc., etc., etc. As Eliza Doolittle said (or sang) in "My Fair Lady," "Show me!"

That's the pity of it all. Pope Francis is a wonderful man. His papacy has reopened windows slammed shut too soon after the Second Vatican Council. His latest document, Fratelli Tutti, is lovely, it really is. But on the face of it, it is addressed to men. No matter how you slice it, fratelli means brothers in any language and in any culture. Then, consider the fact that the document includes the words "fraternity" some 55 times, "fraternal" some 18 times and gratingly refers to the church as "she" at least five times. To top it off, no women are quoted or cited.

Oh, it appears they did try to fix it. A computer search seems to have replaced "brother" with "brother and sister" nearly 30 times, even changing Scripture translations. For example, the translation of 1 John 2:10-11 approved by the U.S. Conference of Catholic Bishops begins "whoever loves his brother," not "whoever loves a brother or sister" as Fratelli Tutti cites it.

The document implicitly criticizes itself and the church, relying on Francis' words from seven years ago: "Similarly, the organization of societies worldwide is still far from reflecting clearly that women possess the same dignity and identical rights as men. We say one thing with words, but our decisions and reality tell another story. Indeed, 'doubly poor are those women who endure situations of exclusion, mistreatment and violence, since they are frequently less able to defend their rights.' "

That is precisely the kind of cognitive dissonance, even gaslighting, that figuratively drives women crazy.

It's a man's world, no doubt. When you think of it, Fratelli Tutti is written by a man (Francis) who took the title from a man (St. Francis of Assisi) who was speaking to men (his friars), and now this document is addressed to men. Well, why not? It's not women who are ruining the world.

While Francis does not mean to insult women, writing that is published under his name too often misses the mark and is needlessly offensive.

Like so much else tumbling from Vatican printing presses, this wonderful document and so many others do not benefit from the presence of women at the table. Yes, there may have been women advisers. "Brothers and sisters" are well noted throughout. And there may have been women translators. The English is extremely smooth, and the document as published on the Vatican website has only one small typographical error.

But its language, like that of St. Jerome and St. Augustine and St. Thomas Aquinas, can be off-putting. So, what to do? How to reconcile what was said with what was meant? The heartbreak of this and other documents is that word choice too often clouds meanings. Words used, not used, or misused do not present the writer's thought and vision.

It's not just about women, but it mainly is.

[Phyllis Zagano is senior research associate-in-residence at Hofstra University in Hempstead, New York." Her most recent book is Women: Icons of Christ, and her other books include Women Deacons: Past, Present, Future (in Spanish as Mujeres Diaconos: Pasado, Presente, Futuro), published in France and Canada as Des femmes diacres and in Portugal as Mulheres diáconos: Passado, presente, futuro. Study guides for these books are available for free download at https://sites.hofstra.edu/phyllis-zagano/.]

Read this next: Pope calls again for 'incisive' women's presence in church, offers no specifics
This story appears in the Fratelli Tutti feature series. View the full series.