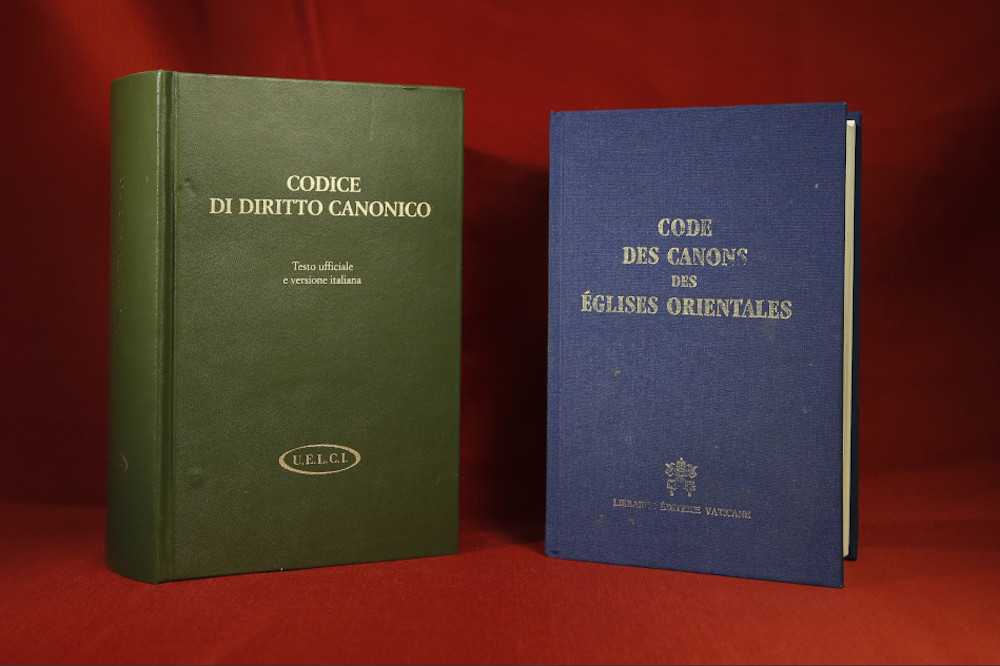 Code of Canon Law books for the Latin and Eastern Catholic churches are pictured in Rome at the Pontifical Oriental Institute in this Sept. 15, 2016, file photo. (CNS/Paul Haring)

Now it is formally illegal to ordain a woman as a deacon. Or as a priest. Or as a bishop.

On June 1, Pope Francis promulgated revisions to the Code of Canon Law detailing crimes and punishments. The new "Book VI: Penal Sanctions in the Church" takes effect Dec. 8. Most of the revisions have to do with crimes of sexual abuse and the responses (or non-responses) of bishops and religious superiors. Some have to do with financial crimes.

And then there is the one about women's ordination: "Can. 1379 § 3. Both a person who attempts to confer a sacred order on a woman, and the woman who attempts to receive the sacred order, incur a latae sententiae excommunication reserved to the Apostolic See; a cleric, moreover, may be punished by dismissal from the clerical state."

While the folks on the right can barely contain their glee, and more folks on the left are heading for the door, there is nothing new about this tiny sentence in a much longer document. In fact, the Congregation for the Doctrine of the Faith presented the same wording and the same penalty in a 2007 General Decree. Then, in 2010, Pope Benedict XVI presented nearly identical modifications to legal norms regarding "grave delicts."

Francis now presents an entirely new law book. On the whole, he repeats or strengthens the ways canon law can chasten, punish or even dismiss offenders in a broad variety of crimes. And he includes laity as well as clerics.

Francis also codifies some interesting concepts. For example, drunkenness is not a defense. In fact, one is doubly responsible if the crime occurs during willful drunkenness, and the penalty for a drunken crime must reflect that greater responsibility.

Then again, there are a lot of loopholes: It seems that ignorance of the law is indeed an excuse. Finally, there is some new language: Twice "means of social communication" are mentioned, once for exciting contempt for religion or the church, another for recording confessions and releasing the information. "Technology" also makes an appearance, in relation to pornography and grooming vulnerable individuals.

The revisions to this particular book of canon law actualize things Francis has spoken about; in particular they more clearly describe sexual abuse crimes and the punishments thereof. Some complain he has not gone far enough, and others complain about an apparent favoring of secrecy, but on the whole, the revised and new canons seem a step in the right direction.

But then there is that new canon about ordaining women, which seems dropped in from nowhere. Maybe so, maybe no. Recall, the wording duplicates the CDF's 2007 decree and Benedict's 2010 modifications to legal norms. Proponents of women moving into the clerical ranks may be disappointed, but there is nothing new.

However, the new canon specifies "a sacred order." That could be just priesthood, at least if history is to be respected. By the time the canonist Gracian collected canon laws in the 12th century, few women and fewer men were ordained to the diaconate as a permanent vocation. The law developed so that no (man) could be ordained a deacon unless he was destined to become a priest. Only more modern arguments conjoin the diaconate and the priesthood, such that that the diaconate is part of priesthood. It is not. The Orthodox have no such confusion, and Ecumenical Patriarch Bartholomew I has said nothing bars the ordaining women deacons. In fact, to conjoin the two orders is to argue for women priests, because there is a long and documented history of women sacramentally ordained as deacons. What the church has done, it can do again. 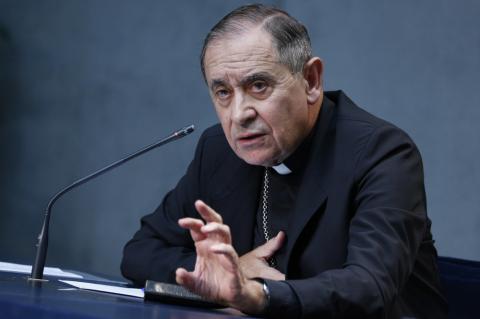 Bishop Juan Ignacio Arrieta, secretary of the Pontifical Council for Legislative Texts, attends a press conference to discuss revisions to the Code of Canon Law, at the Vatican June 1, 2021. (CNS/Paul Haring)

The important thing to remember is that the now codified restriction against ordaining women, at least as deacons, is a "merely ecclesiastical law." That is, it can be changed. Recall, if you will, that Francis modified canon law to allow all laity — male and female — to be installed as lectors and acolytes. That represented a development of doctrine. And the current discipline is that all persons who are ordained deacons must first have served in these two installed lay ministries.

We know "merely ecclesiastical laws" can be modified. So does Francis.

The best news in all this came at a press conference when Bishop Juan Ignacio Arrieta, secretary of the Pontifical Council for Legislative Texts, answered an interesting question. Catholic News Service asked why the revised canon does not specify priestly ordination, thereby leaving open the question of women deacons. After all, there is now a second study commission on women deacons.

Arrieta said that law reflects current church teaching, and "If we come to a different theological conclusion, we will modify the norm."

A version of this story appeared in the July 9-22, 2021 print issue under the headline: New canon on women's ordination nothing new.