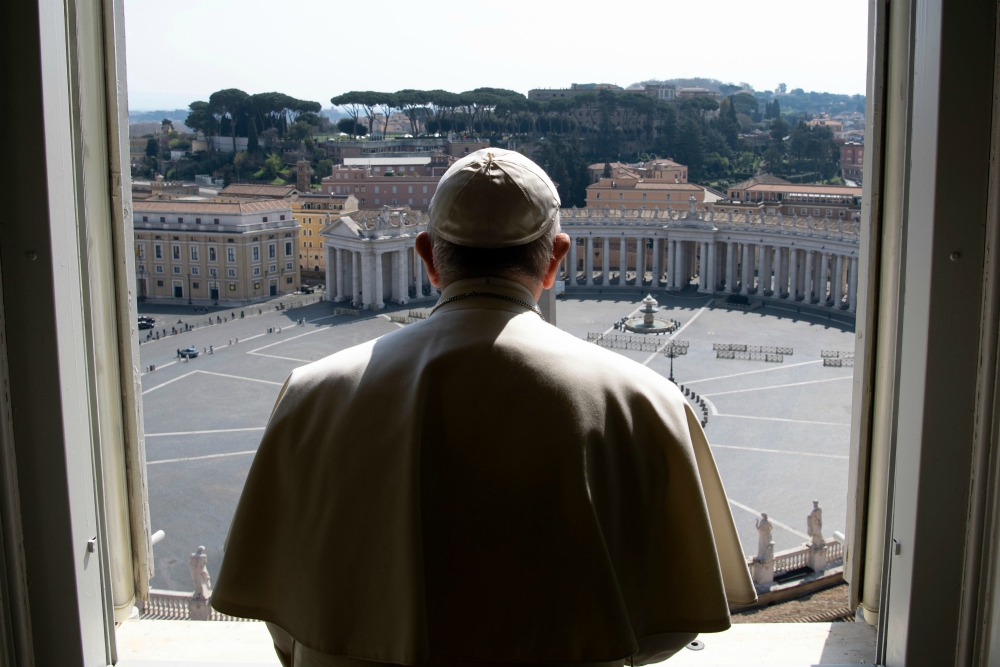 Pope Francis looks over an empty St. Peter's Square after leading a livestream of the recitation of the Angelus from the library of the Apostolic Palace March 22. (CNS/Vatican Media)

It's a new-old world: two popes and a plague, just like the 14th century.

As most of the church sits in isolation, hoping and praying for an "all clear" message and the chance to resume life as it was, new ways of being church arise.

The pope's daily Mass at Casa Santa Marta goes live every morning on Vatican News. In real time or later, people around the world can celebrate virtually with him and his personal staff — two priest secretaries, a chaplain and bodyguards — and the Sisters of Charity who live next door and work in the residence.

Of course, carpe diem causes more than enough carping. Around the world, ultraconservative religious personalities and publications complained about canceled Masses and incredibly enough defended reception of Communion on the tongue at the start of the current pandemic. And Cardinal Raymond Burke is still telling folks to go to Mass.

Have they learned nothing from history?

When, in the 1300s, nearly a third of Europe's population succumbed to the plague, great saints arose to serve the people and calm their fears. Naysayers were undoubtably busy then, too. But Catherine of Siena disregarded the women who wished to bar her from the Mantellate (a third order of St. Dominic); she cared for the sick, buried the dead and attracted a following. Not incidentally, she also convinced the true pope, then captive in Avignon, France, to return to Rome.

We know Catherine wrote some 400 letters and prayers. What could she have done with Zoom, Twitter and Facebook? But even today, her life, words and work can help model the contemporary church.

Of course, Catherine never read Avery Dulles' Models of the Church, although she saw them in her own world, just as we see them today. Catherine saw a servant church, committed to social justice, and a herald church, announcing the good news. She knew and felt the church as sacrament, a sign pointing to salvation. She belonged to a church that formed a mystical communion of all its members. She respected the church as structured institution, but she also saw the church as a community of disciples.

These last two models live in tension now as in the time of Catherine, as proponents of the law emphasize structure, doing battle with the prophets in the community of Jesus's disciples. As the structure group argues for uniformity, law and Latin, the community of disciples recognizes the different ways the church thrives and its needs for alternative forms of ministry.

Such is the problem of "two popes" during the current plague. The extremely well-funded pope emeritus crowd (can we call them supporters of an anti-pope?) grumbles at Pope Francis' openness to new and different ways of ministry and of church. Although coronavirus temporarily distracts the anti-Francis crowd from the recommendations of the Synod for the Pan-Amazon region, their emphasis on law and uniformity combined with their cherished clericalism predicts post-pandemic whining at an unprecedented level.

Academics and journalists alike can rank Dulles' six models of the church however they wish. Most folks now not in the pews know only one thing: The reality of church is changing radically all over the world and what was will likely no longer be. For some, the loss of a museum-piece church marks the end of Catholicism. For others, change is a very good thing, as new forms of ministry and new ministers arise to bring the good news to all.

As in the 14th century, what is certain now is there is no certainty and we need to be as "connected" as possible.

[Phyllis Zagano is senior research associate-in-residence at Hofstra University in Hempstead, New York. She will speak Oct. 3 at the Voice of the Faithful Conference "Visions of a Just Church" in Newton, Massachusetts. Her books include Women Deacons: Past, Present, Future (in Spanish as Mujeres Diaconos: Pasaso, Presente, Futuro), published in France and Canada as Des femmes diacres and in Portugal as Mulheres diáconos: Passado, presente, futuro. Study Guides are available for free download at https://sites.hofstra.edu/phyllis-zagano/. Her most recent book is Women: Icons of Christ.]

Editor's note: We can send you an email alert every time Phyllis Zagano's column, Just Catholic, is posted. Click here to sign up for email alerts