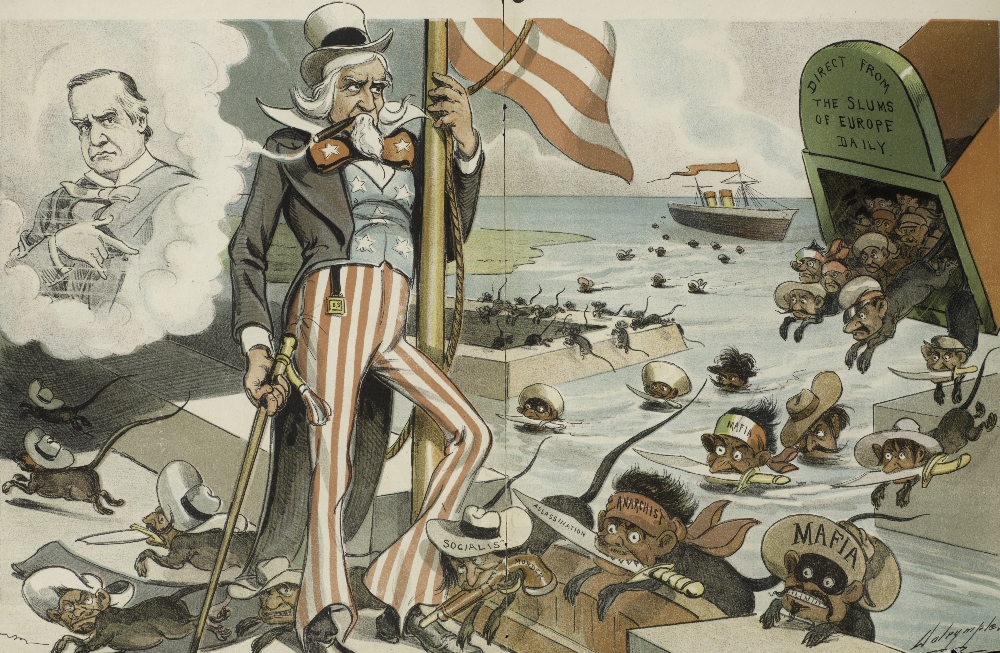 Do you have no shame, Mr. President?

No, Donald Trump has no shame in taking children away from parents as they attempt to appeal for asylum and refuge in the United States. What a heartless and cruel thing to do and yet Trump does it. While he now says that he will stop this practice, he will do nothing apparently for those children and parents who already have been separated. The same public and political pressure that has forced Trump to change his policy needs to continue to deal with those already separated.

But there are larger issues here. Trump's immigration policies and views may go against the ideology of America as a country of immigrants, but it is still in line with nativist, anti-immigrant sentiment in the United States that has a long history.

Early naturalization laws, for example, only permitted white European immigrants to be eligible for naturalization. Nativists such as the Know-Nothings objected in the mid-19th century to the entrance of German and Irish immigrants. In 1882, the Congress passed the Chinese Exclusion Act barring Chinese immigration to the United States. This was spearheaded in California where white Americans claimed the threat of a "Yellow Peril."

In the early 20th century, nativists protested the mass immigration of the "new immigrants" from Eastern and Southern Europe, such as from Russia, Poland, Italy and Greece. Nativists viewed these immigrants as too Jewish and too Catholic. These immigrants were not even considered "whites" at least through the first generation. This opposition led to infamous laws in the early 1920s that significantly curtailed immigration from these parts of Europe by placing strict and limited quotas from these areas.

At the same time, as thousands of Mexican immigrants began to cross the border, nativists began to talk about a "Mexican problem." While Mexico was never included under the quota laws, Mexican immigrants were racially exploited, discriminated against and segregated. The very term Mexican became racialized in the Southwest and along the U.S.-Mexico border in the early 20th century. That is, white Americans considered anyone Mexican a member of an inferior "race."

This racist perception was expanded in the early 1930s, when Mexicans were blamed in some circles for the Great Depression. Acting on this, the Hoover administration deported about half a million people of Mexican descent to Mexico. The majority should have never been deported because they were U.S.-born children. Talk about cruelty to children! Sending children born in the United States to Mexico was an emotional crisis for many who either didn't speak Spanish or didn't speak it well enough to be easily integrated into their new schools in Mexico.

Nativists, however, are never satisfied in their efforts to keep the country white and Protestant, and so in 1954 the Eisenhower administration spearheaded "Operation Wetback," using the pejorative term to deport some 1 million alleged Mexican undocumented.

In the 1970s, U.S. immigration officials, including the Border Patrol, invented the term "illegal alien" and thus created a new class of "criminals" to be apprehended and deported even though under the law, entry into the country without permission is only a misdemeanor.

One can go on and on with examples, such as Proposition 187 in California in 1994 that denied the undocumented, including their children, access to public services, including education.

And so these nativist and racist sentiments unfortunately continue under Trump. He is part of a long line of white Americans who fear "losing" what they perceive to be "their country" and not be "infested," as Trump puts it, with immigrants and refugees of color.

There is a long history of a love/hate relationship with immigration and it is a struggle over the meaning of America and the soul of America. This is not as much a political or economic struggle as it is a moral one.

Those of us as Catholic Americans have historically been charged as being "un-American" due to our faith and so we share, or should share, compassion with the current refugees and immigrants from Central America and Mexico. They are us and they are Christ. No Catholic can or should be nativist and racist.

Let's hope our Catholic priests take their lead from Pope Francis and from the U.S. Catholic bishops and also denounce in their homilies the un-Christian and inhumane policies of the Trump administration. Let's do it for the babies!