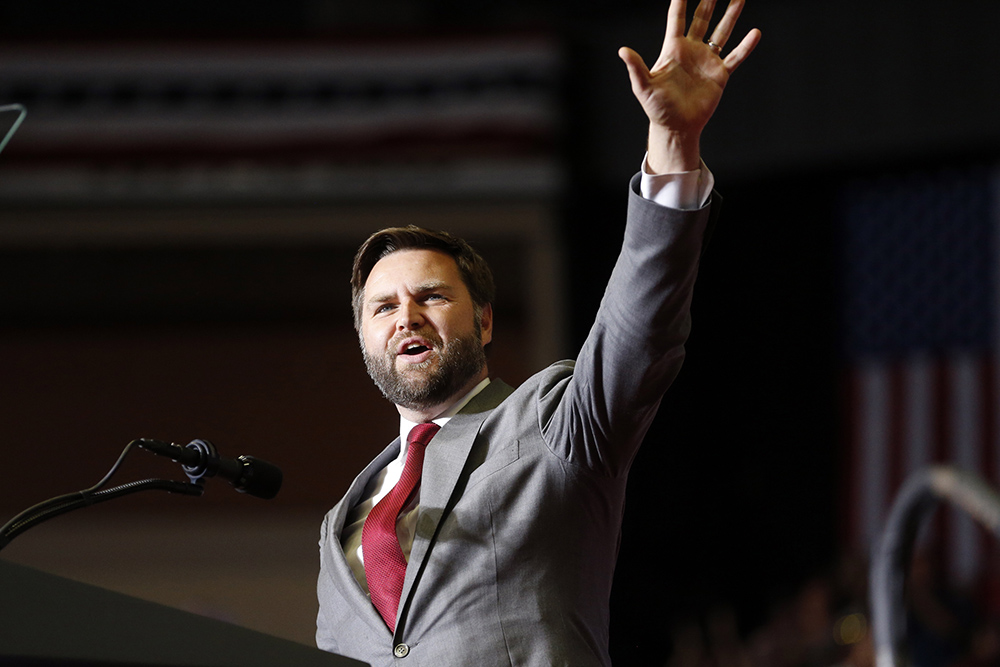 Who knew Catholicism would be on the ballot in Ohio this year? As my colleague Brian Fraga reported earlier this week, the two Senate candidates, Republican J.D. Vance and Democrat Tim Ryan, really do represent vastly different faces of Catholicism in the public square.

Ryan is a younger version of Joe Biden. He is deeply influenced by Catholic social teaching, the kind of pro-labor, anti-free trade Democrat who was more common in the 1970s than in the Bill Clinton and Barack Obama years of moderate neoliberalism.

Like Biden, Ryan was determined to stay in the pro-life camp early in his career, but he began to shift his position during the debates over the Affordable Care Act. Still, he is not a culture warrior on social issues, and his heart, mostly worn on his sleeve, is moved by the struggles working-class Americans face.

J.D. Vance is running as a 21st-century American version of Charles Maurras, the founder of far-right Action Française. Like Maurras, Vance was an author before he became a politician, and both men were moved by events to enter politics as champions of a chauvinistic nationalism, Vance by the rise of Donald Trump, and Maurras by the Dreyfus affair.

Both embrace the Herderian idea that cultures are incommensurable, an idea also embraced by some on the left who fret about "cultural appropriation." The idea might have been plausible in early 20th-century France, but it is an idea rejected by the most basic experiences of American life where cultures blend and enrich each other every day. Then, the idea paved the way for fascism, and there is no reason to think it can't serve a similar function today.

In both cases, Catholicism was central to their political conception of the country, even while they disavowed many of the actual tenets of the faith. Maurras had become an agnostic in his youth, but saw the Catholic Church as a bulwark of the ancien régime, an enemy of liberalism, a safe space for anti-Semites and other xenophobes.

Vance sees Catholicism in a similar fashion. The Catholic Church of his imaginings is part of a "post-liberal" America, and so it was unsurprising Vance took time off the campaign trail to speak at a conference of conservative, post-liberal nationalists at Franciscan University at Steubenville, Ohio. The event included people like Harvard law professor and Christian integralist Adrian Vermeule, former New York Post opinion editor Sohrab Ahmari, and Rachel Bovard, senior director of policy at the Conservative Partnership Institute.

Who talks like that? These are Vance's intellectual running buddies.

Also unsurprising is the fact that one of the guests when Vance was received into the Catholic faith* was Benedict Option author Rod Dreher, the Methodist-turned-Catholic-turned-Orthodox writer who recently separated from his wife, left his children so he could move to Hungary and be near his hero, Viktor Orban.

To hear him invoke his religion, you would never think that religion assures us that the meek are blessed and the rich will be sent away empty. The ancien régime of his heart is the imagined moral landscape of the 1950s, when moms mostly stayed at home, gays stayed in the closet, and the business of America was business.

Maurras, of course, was a monarchist, which is not a viable option in 21st-century America. Still, does anyone doubt that Trump would accept a crown if it were offered to him?

We know Vance would not demur. At a campaign event, he stood by sheepishly as Trump robbed him of his dignity, saying the Senate candidate was "kissing my ass" to get his endorsement. The former president compared Vance to North Korean dictator Kim Jong Un in this regard. Vance, in true courtier fashion, said not a word. That was painful to watch.

There is another episode in Vance's past that has more than a whiff of fraudulence about it, and it predates the current campaign. We shouldn't dismiss a conservative who says he wants to help solve the problems that afflict our nation, problems such as the opioid epidemic, just because he is a conservative. But the nonprofit Vance started in 2017 to address such problems, "Our Ohio Renewal," never really got around to addressing the crisis. It did manage to hire a political consultant who, lo and behold, ended up as a consultant to Vance's political campaign.

This sense of fraudulence is yet more comprehensive. On the campaign trail, and during his speech at the Steubenville conference, he frequently criticizes "the elites." About whom is he speaking? Those educated at Yale? Published authors? Silicon Valley venture capitalists?

Perhaps all the talk about pronouns on the left have confused him, but in normal English discourse, when speaking about a group to which one belongs, we employ the pronoun "we."

Vance is probably going to win. The RealClearPolitics average of polls has Vance up by two points. In 2020, going into the final weeks of the election, Ohio was also considered a tossup, within the margins of error for most polls, but Trump won by 8 percentage points. The same thing had happened in 2016. I keep hoping Ryan can pull it off, but it is doubtful.

For all the worry about the state of Joe Biden's Catholic bona fides in some circles, it is Vance and his brand of Christian nationalism that represent a far greater threat to Catholic identity. Lest we forget, Pope Pius XI condemned Action Française in 1926.

I pray Vance might have a conversion experience, fall from his horse en route to D.C. That is unlikely. So I wish Vance and his ilk would at least stop giving Catholicism a bad name.

* This story has been updated to insert a phrase that was mistakenly deleted.