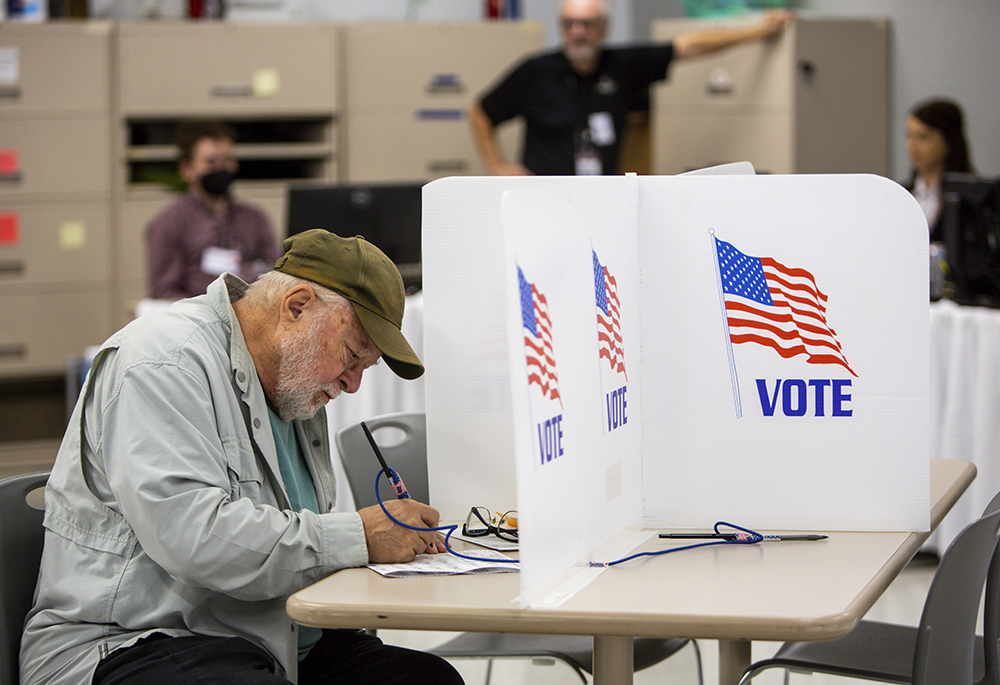 Voters cast their ballots Sept. 23 in Minneapolis. With Election Day still more than six weeks off, the first votes of the midterm election were already being cast that Friday in a smattering of states, including Minnesota. (AP photo/Nicole Neri)

The midterm elections are less than a month away, and no one knows exactly how they will turn out. The party that controls the White House usually loses seats in a midterm election, and President Joe Biden's approval numbers are underwater, but Democrats see signs of hope too. Whatever the result, we will learn something about the moral fiber of the country.

The outstanding issue in many Senate races is the fact that the Republicans have fielded candidates who are, in a word, lousy. In Georgia, former running back Herschel Walker's campaign is mired in accusations he paid for a woman's abortion, which is awkward seeing as he is running as a pro-life candidate. Walker's blanket denials are implausible, and the story seems not to be going away.

In Pennsylvania, celebrity doctor Mehmet Oz had unusual name recognition, for example, appearing with his wife in a 2020 People magazine spread that showed them in the house they "built from scratch." You can't pay for that kind of publicity! Unfortunately for Dr. Oz, the mansion was in New Jersey, not Pennsylvania, and Democratic candidate, Lt. Gov. John Fetterman trolled Oz about not being a native of the Keystone State all summer.

Arizona's GOP Senate nominee Blake Masters is a venture capitalist and protégé of billionaire Peter Thiel. Both of them are like characters out of an Ayn Rand novella, except neither would recognize that what counts as heroic for Rand turns out to be nightmarish for society. No candidate in this cycle betrays the totalitarian itch at the heart of libertarianism more than Masters. Thiel is mounting a late effort to raise money for Masters, after haggling for months with Senate Minority Leader Mitch McConnell about who would fund the Arizona campaign.

Republicans should be swimming to an easy victory in all three states. The problem is all three had to embrace ridiculous positions to win the endorsement of former President Donald Trump, the key to their victories in the GOP primaries. Masters scrubbed his campaign website of his extreme positions on abortion and whether or not the 2020 election was stolen after winning the primary. Did he not think anyone would notice?

As summer came to a close, all three contests were getting tighter.  The most likely reason is that Republicans who supported more moderate and sane candidates in the primaries were holding their nose and "coming home." This dynamic has been at work in both parties for a long time: Candidates run to the extreme in primaries to win the support of the base, and then tack back to the center for the general election.

Now, however, when GOP candidates need to deny the 2020 election results or dabble in racist dog whistles, moderate GOP voters need to decide if they are OK with that. In the end, many of them would rather support a Republican who dabbles in racism rather than a Democrat with whom those Republican moderates differ on a host of issues, including hot button cultural issues like abortion, policing and transgender participation in sports programs. Remember: What those Republicans likely know about Democrats is what they learned about them on Fox News.

The prospect of a national party embracing extreme ideas that were considered too reprehensible to be spoken out loud even a few years ago is alarming, but it is not the only moral issue that will be decided this year. A perennial issue that garners too little attention is the ability of the economy to sideline all other issues.

When GOP candidates need to deny the 2020 election results or dabble in racist dog whistles, moderate GOP voters need to decide if they are OK with that.

To be sure, inflation is causing real economic hardship, especially among the working class and poor people who are struggling with higher rents, higher fuel prices and higher grocery bills. Those who are retiring are rightly worried about the state of their retirement accounts. Still, for most people, the uncertainty of the post-pandemic economy is not an existential challenge.

Yet, the economy is what most voters say matters most to them. With the issue of abortion, no matter what you think, you think someone's fundamental rights are at stake. Racism caused the worst war in our nation's history. Denying election results that are indisputable undermines democracy itself. Should all of these morally consequential issues be sidelined because gas prices are up?

Related: Activists angry at Republicans for backpedaling on abortion during midterms

To the extent analysts do focus on the relative weight of these issues, it tends not to move much beyond electoral strategy. Asked about the effect of high-profile PR stunts like transporting migrants to liberal enclaves, GOP strategist John Thomas told Politico, "It's mostly college-educated white women that are going to decide this thing. Republicans win on pocketbook issues with them, not busing migrants across the country."

To hell with humanity, so long as my credit card balance is paid off.

To be sure, there remain millions of Americans who engage in countless acts of selflessness every day. But the disconnect between that decency and the nation's electoral politics is now a chasm. Chasms are deep fissures in the planet, and the only way to cross them is by building a bridge. It is hard to see how these fraught midterm elections will produce anyone who is interested in bridge-building.