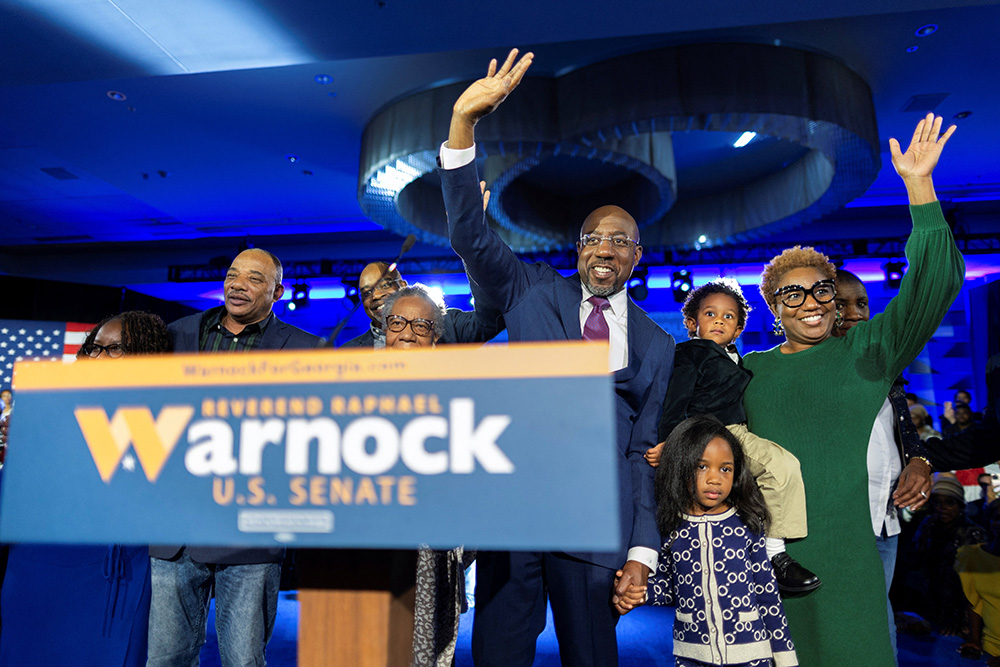 Sen. Raphael Warnock, D-Georgia, is joined on stage by family members during an election night party in Atlanta Dec. 6, after his projected win in the Georgia midterm runoff election over Republican challenger Herschel Walker. (CNS/Reuters/Carlos Barria)

The results in Georgia's runoff should serve as a wake-up call for both parties but, with the notable exception of Democratic commentator Van Jones on CNN, I only heard Republicans admitting they needed to do some soul-searching. Jones pointed out that Sen. Raphael Warnock should have beaten Herschel Walker by 50 points, not the 2.5 points that was the final margin. He also, rightly, gave a shout out to Stacey Abrams who lost her gubernatorial bid in November, but whose work registering Democrats in Georgia made Warnock's ascendency possible.

While conservative Christian groups were celebrating the friendly hearing an evangelical Christian web designer got at the Supreme Court this week, where she said her beliefs kept her from creating a website for same-sex marriages, a group of waiters at a restaurant in Richmond, Virginia, refused to serve a reception for a conservative Christian organization and the event was canceled. Gander, meet goose. These cultural divisions go deep and it is not at all clear how we can get to a point where the culture wars do not affect everything. It is clear that the Christian church should be looking to heal these divisions, not exacerbate them.

Politico reports that second gentlemen Doug Emhoff is now "the face" of the Biden administration's efforts to confront antisemitism. The husband of Vice President Kamala Harris is one of the nation's most prominent Jews, to be sure. But antisemitism is a problem for Jews, not about them, and it would be better to make a recognizably devout Christian "the face" of the effort. I nominate Holy Cross Fr. John Jenkins, president of the University of Notre Dame, to the post. He is able, avowedly nonpartisan, and Notre Dame has always leaned in to interreligious dialogue.

The New York Times reports on United Nations efforts to document war crimes in Ukraine. Apparently, the evidence is overwhelming. It is most certainly heartbreaking. What it is not is surprising. Wars in this part of the world have never been known for their conformity with international law or with the jus in bello proscriptions of just war theory. There is a reason Yale University historian Timothy Snyder's monumental book is called Bloodlands.

At NPR, Michel Martin interviews Hyattsville, Maryland, police chief Jarod Towers about how police can build trust with the communities they serve and deescalate situations of potential conflict. He makes the case that it is about changing the culture of the police force.

At The New Republic, Matt Sitman retrieves a somewhat obscure essay by Jean-Jacques Rousseau to wonder if the American experiment was doomed from the start by expecting to forge a republican form of governance for such a vast and varied land. Along the way, Sitman demonstrates why those who are schooled in history make the most provocative and interesting social critics, and why his voice is among the most penetrating in the culture.

Finally, from Architecture Daily, a look at one of Le Corbusier's masterpieces, the chapel of Notre Dame de Haut in Ronchamp, France. The story of two young Spanish architects visiting the great man at his studio in Paris is stunning and points to a reality we, or at least I, sometimes forget in the day-in, day-out hustle of trying to be a thoughtful Catholic and Christian: At the end of the day, the life of faith is ineffable.