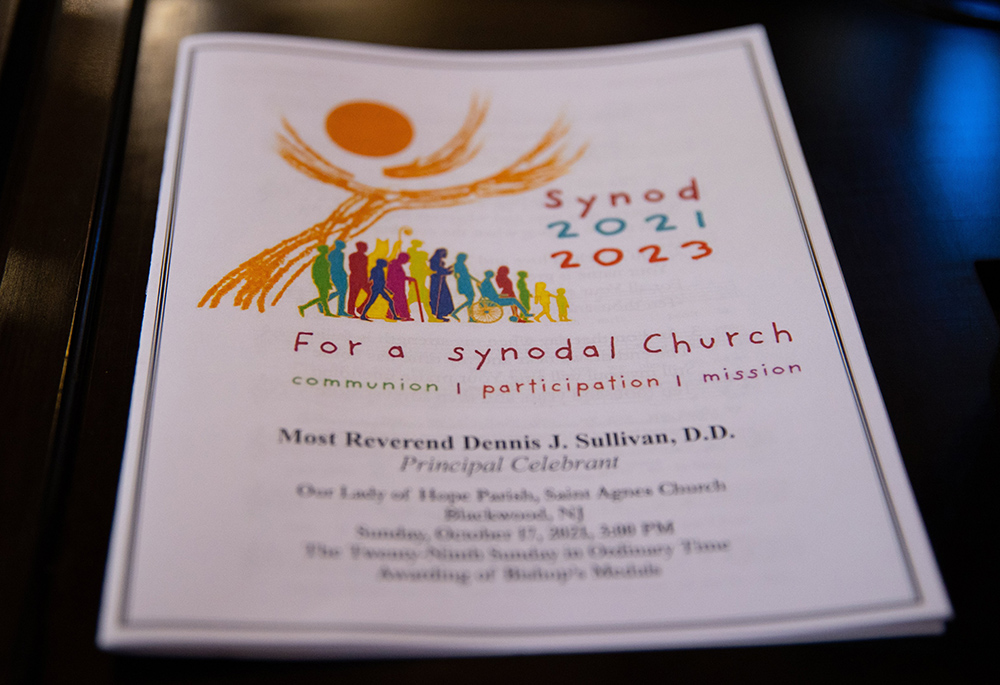 A program for a Mass opening the synod process in the Diocese of Camden, New Jersey, is seen at St. Agnes Church of Our Lady of Hope Parish Oct. 17, 2021, in Blackwood, New Jersey. (CNS/Catholic Star Herald/Dave Hernandez)

Looking ahead and venturing predictions is always a risky business, even in a church like ours in which traditional ways of doing things tend to be the norm. Still, in 2023 I will predict we will see the synodal process continue to garner attention, albeit fitfully and with a step backwards for every two steps forward, a spasm of anti-Francis sentiment coinciding with the 10th anniversary of his election in March, and the beginning of the most substantial remaking of the U.S. hierarchy since the 1980s.

The synodal process will operate in 2023 at two levels. On the one hand, all attention will be focused on preparation for the Synod of Bishops in Rome in October. Preparatory documents will be drafted and refined; there will be meetings at the local, national and continental levels; and delegates will be selected. All of this seems to have already taken on a clear direction, even here in the United States where there has been resistance to the synodal process: People like being consulted and the hierarchy has committed itself to listening to what the people in the pews have to say. The October meeting will be akin to a gathering of pastors, all of whom stand outside their church on Sunday, sharing what they heard from the people as they left Mass.

When I was in Rome last summer, Vatican officials told me that even those who had been skeptical of the process had reported being glad they engaged it once they did so. We must continue to hope conservatives will engage this process and not merely bad-mouth it, as their voices need to be heard as well. The issues being raised are many and varied. Some are neuralgic, like those involving gender, and others may not be particularly sensitive but will prove difficult to advance anyway, such as improving the quality of preaching. In any event, that process of preparation leading to the October meeting in Rome is moving along and that movement will continue in 2023. 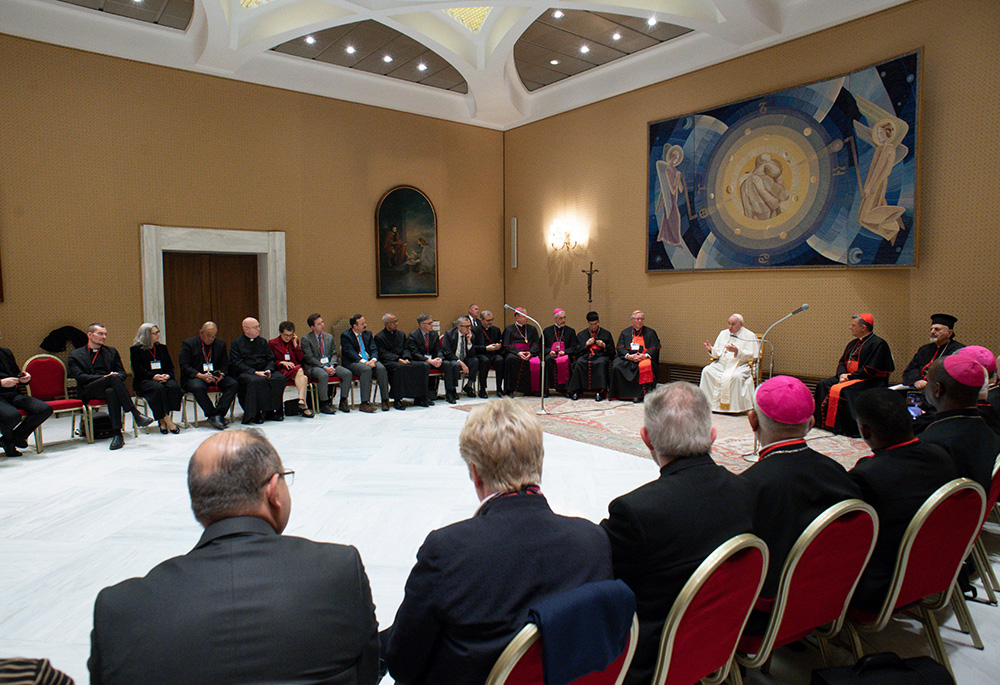 Pope Francis leads a meeting with the presidents and coordinators of the regional assemblies of the Synod of Bishops at the Vatican Nov. 28, 2022. Archbishop Timothy P. Broglio, president of the U.S. Conference of Catholic Bishops, attended the meeting. (CNS/Vatican Media)

The more overlooked part of the synodal process has to do with the meantime and the opposite direction. Having been consulted, are the people of God supposed to wait around watching the wallpaper age until the conclusion of the October meeting? How can the church, at all levels, keep the energy and the conversations and the dialogue going in the meantime? And to what end? Are there conversations between bishops about what works to keep the dialogue going? How are they working on the vital task of managing expectations? Has the theological community been engaged to help give the dialogue something to chew on? These and other issues will manifest themselves more and more in 2023, especially if they are not addressed at all.

March 13 will mark the 10th anniversary of the election of Pope Francis. For many of us, this will be a moment to celebrate the most exciting pontificate in our lifetime! For others, the anniversary will be an opportunity to reflect on the next papacy, that is, to imagine the demise of Francis.

The opposition to Pope Francis comes in two major varieties. The full-blown nutty is found at relatively obscure groups like LifeSiteNews or Church Militant. The former hosts a show with Bishop Joseph Strickland of Tyler, Texas, who has come to personify the kind of distorting obsession with a few key issues of pelvic theology that has morphed into a quasi-schismatic brand of Catholicism. The latter has recently become a venue for the witch hunters at the Lepanto Institute to mount their campaign against the Catholic Campaign for Human Development, the anti-poverty arm of the U.S. bishops' conference. They misunderstand our Catholic teaching on cooperation with evil profoundly, and in so doing, try to besmirch the reputation of CCHD's work. It is a badge of honor to be attacked by these groups, and the bishops need to stand firmly behind CCHD in the face of these attacks.

More troubling, however, are mainstream outlets like the National Catholic Register, part of the EWTN media conglomerate, that peddle attacks on the pope. Their Vatican correspondent, Edward Pentin, published what can only be called a "hit job" on the organizers of the synodal process in November. Pentin warns that the working text for the continental stage "controversially includes explicit calls for the transformation of Church structures and content that dissents from the Church's magisterium." The text collated reports, and the reports mentioned these calls. How is that controversial if one is acting as a rapporteur?

This kind of insinuation that the synodal process is rigged is insidious. Also, sadly, childish. Pentin resembles Kari Lake, the failed gubernatorial candidate in Arizona who insists the only legitimate result of last November's election would have been a win for her. Or, those pro-choice advocates who question the legitimacy of the Supreme Court because it overturned Roe. v. Wade. The legitimacy of a synodal process or an election or a court hearing is not dependent on getting the result one wants. Since the beginning of his pontificate, much of the criticism of Pope Francis has sounded like the complaints of children who have had their toys taken away from them.

Pentin is not alone at EWTN in constantly criticizing Pope Francis. Raymond Arroyo uses his Thursday night news magazine "The World Over" to host a series of papal critics, like Cardinal Gerhard Müller, and Auxiliary Bishop Athanasius Schneider. There are hundreds of bishops here in the U.S. who have never been interviewed by Arroyo. Is it necessary to get an auxiliary bishop of Kazakhstan?

At The Pillar, editor J.D. Flynn commented on the laicization of Fr. Frank Pavone, writing: "But for many Catholics, Pavone's persecution narrative rings true — trust in U.S. bishops is low among many practicing Catholics, and trust in Pope Francis is even lower." Trust in the pope is lower? According to the Pew survey in 2021: "Overall, 83% of U.S. Catholics say they have a favorable view of Pope Francis, compared with just 14% who express an unfavorable view of him." Maybe in Flynn's circle, the pope is viewed unfavorably, but the rest of us love our Holy Father. 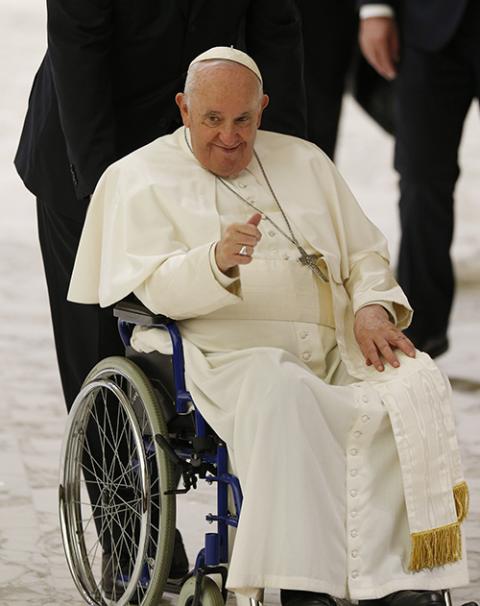 Pope Francis gives a thumbs up as he rides in a wheelchair during his general audience in the Paul VI hall Dec. 7, 2022 at the Vatican. (CNS/Paul Haring)

The 10th anniversary of Francis' election, and the fact that he is so widely admired, will drive papal critics to ever greater, and more shrill, attacks.

On June 21, 2023, Archbishop Dennis Schnurr of Cincinnati will turn 75 years old, and must submit his resignation to Pope Francis. On Oct. 21, 2023, Detroit Archbishop Allen Vigneron will turn 75 and send in his resignation. The retirement of these two archbishops starts a waterfall of resignations that will permit Pope Francis to remake the leadership of the U.S. church. In 2024, the archbishops of Mobile, Alabama; Chicago; Milwaukee, Wisconsin; Hartford, Connecticut; Galveston-Houston, Texas; Omaha, Nebraska; Kansas City, Kansas; and New Orleans, Louisiana will all hit the mandatory retirement age. Some may receive coadjutors before their retirement date. Already, Bishop Mike Warfel of Great Falls-Billings, Montana, who hits 75 next September, received a coadjutor, as did Bishop Thomas Tobin of Providence, Rhode Island, who hits 75 in April.

Not since Pope John Paul II began remaking the U.S. hierarchy appointing John O'Connor as archbishop of New York and Bernard Law as archbishop of Boston in January 1984 has the possibility of such a sea change at one time become apparent. The principal consideration in filling these vacant metropolitan sees will be local: Does the diocese need someone adept at meeting certain special needs or circumstances that have arisen? Which languages must an incumbent have? How vital is fundraising? But, it is hoped that in choosing these new archbishops, some consideration will be given to the need to elect leadership at the U.S. bishops' conference.

Those are some of the stories I will be looking at in the coming year, although we can all be sure that some new, presently unimaginable stories will emerge as well. One thing is certain: The life of the Catholic Church in the United States is never, ever dull.

Related: 2022 in politics: Sadly, religion contributed to our smallness