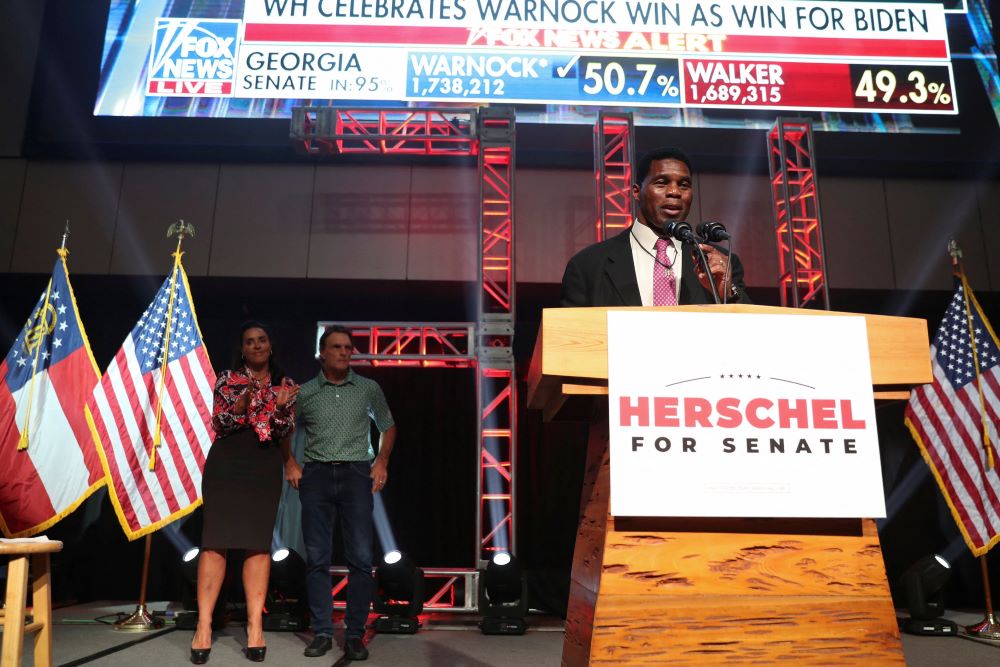 During the coverage of Georgia's Senate runoff Dec. 6, one of the networks interviewed a Republican woman who acknowledged the GOP candidate, former football star and Trump-recruit Herschel Walker, was not the most politically competent contender she had seen, but she was still voting for him because "we need another Republican vote in the Senate." She wasn't alone. Walker lost to Democratic Sen. Raphael Warnock by less than 100,000 votes out of 3.5 million cast.

The comment was what the great political commentator Mike Kinsley once defined as a political gaffe: "when a politician tells the truth — or more precisely, when he or she accidentally reveals something truthful about what is going on in his or her head." What this woman understood was that no senator is going to be able to break with his or her party very often. Most of the time, they just have to do what they are told. And, apparently almost half of all voters in Georgia were willing to support someone who was manifestly incompetent because they like what the Republicans stand for or, more likely, they dislike the Democratic brand.

Yet we have just come through a political campaign season in which 870 candidates in the House and 70 in the U.S. Senate spent more than $6 billion in campaign ads, most of which either claimed unique talents and virtues for the candidate they supported or dumped allegations and opprobrium on the opponent. Not one admitted what the Georgia woman understood.

Not one said, "Look, if you elect me, I am going to be one of 435 members of Congress. Hopefully my party will be in the majority, but a lot of other voters have a say in that besides those of you in this district. I will do my best to enact policies I support, but I cannot in good conscience tell you I am going to single-handedly strengthen Social Security or reduce the federal debt."

There is a cost to democracy when veracity is traded for marketing.

One of my favorite fact-checks of the season concerned an ad from Nevada Sen. Catherine Cortez Masto. The Washington Post analyzed these sentences: "Catherine Cortez Masto knows working families deserve better. That's why she worked with both parties to help lower Nevadans' costs. Lower costs for our health-care premiums and prescription drugs.'

The fact-checker correctly noted that the bipartisan legislation mentioned in the second sentence did not include the prescription drug provisions mentioned in the third sentence. The prescription drug provisions were in the Build Back Better bill, which had not yet been enacted and which did not enjoy bipartisan support. They awarded the ad "2 Pinocchios."

I notice a different problem: the verb tense. The Build Back Better legislation, which did eventually pass, will reduce prescription drug prices, but the provision that finally allowed Medicare to negotiate drug prices with pharmaceutical companies does not go into effect until 2025, and then only for a few drugs. Then, in 2026 and 2027, an additional 15 drugs are subject to negotiation, 20 more drugs in 2028, and so on. Cortez Masto was claiming credit for a law that had not been passed, and for results that won't happen for years. I wonder how many voters are looking at their prescription drug bills and wondering why they have not gone down?

Back in May, President Joe Biden spoke about the economy. "And our plans and our policies have produced the strongest job creation economy in modern times. In addition, 8.3 million jobs in my first 15 months in office — a record," the president said. "Unemployment rates are down to 3.6 percent — the fastest decline in unemployment to start a presidential term ever recorded."

Those numbers are accurate, but claiming credit for them is tricky. Unemployment, like inflation, is the result of a variety of complex factors, many of them beyond the control of the president and almost all of them taking time to deliver consequences.

On June 4, 1940, the last British and French soldiers were evacuated from Dunkirk, and the British leaders and people breathed a sigh of relief. Parliament assembled and Winston Churchill, who had only been prime minister for less than a month, addressed the House of Commons. “We must be very careful not to assign to this deliverance the attributes of a victory,” he began. “Wars are not won by evacuations.”

Had he been advised by a marketing maven, he would have omitted that somber, opening note. But he did not deceive people about the still dire situation they faced. When Hitler turned his war effort on London, the British people were prepared.

There is no comparison between the kind of threat to democracy posed by Trumpian election deniers and the more general want of veracity I am describing here. The former is a gross and graver threat, but it is also true that the latter threat made the former more possible. Millions of Americans were alienated from government in the past 40 or 50 years, and that was not Trump's fault. Until the Democrats learn to reconnect their campaigning with their governance, and eschew the marketing approach, they run the risk that next time, someone like Herschel Walker will win.