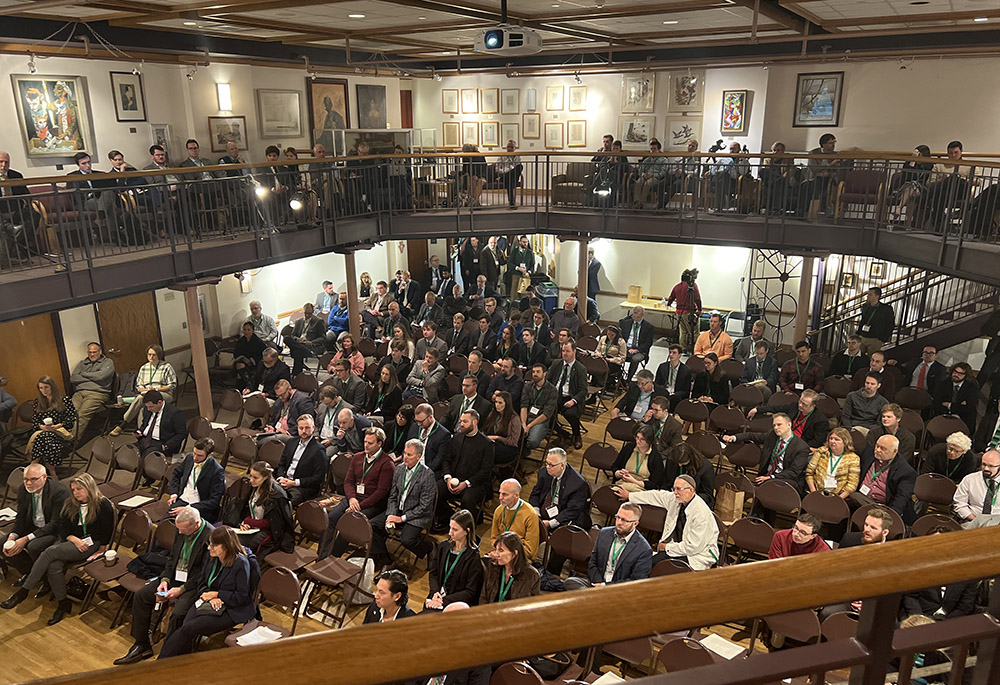 The audience gathers at Franciscan University of Steubenville in Ohio for the Oct. 7-8 conference "Restoring A Nation: The Common Good in the American Tradition." (NCR photo/Brian Fraga)

Last week, I read a guest essay in The New York Times by Steven Paulikas, an Episcopal priest in Brooklyn, titled "Same-Sex Marriage Is a Religious Freedom." As a member of the Anglican Communion and an ordained minister in the Episcopal Church, Paulikas was able to say without reservation that his "wedding was an exercise of the freedom not only to be married under equal protection of the law but also to practice our religion."

Obviously, the Roman Catholic position is different, as it does not currently recognize the sacramental validity of same-sex marriages. And yet, since the Second Vatican Council, the Catholic Church does recognize the fundamental human right to religious freedom.

As the church's Declaration on Religious Freedom, Dignitatis Humanae, states, "The human person has a right to religious freedom. This freedom means that all men are to be immune from coercion on the part of individuals or of social groups and of any human power, in such wise that no one is to be forced to act in a manner contrary to his own beliefs, whether privately or publicly, whether alone or in association with others, within due limits."

While the Roman Catholic Church would not internally recognize the sacramental validity of same-sex marriage, this theological and disciplinary practice of restricting marriage ad intra exists in tension with the church's affirmation of the fundamental human right that exists for others to exercise their own religious traditions, including equal access to marriage within their churches and a pluralistic, constitutional society.

However, as Paulikas rightly notes about the current social and political climate in the United States, "a powerful political, legal and social movement is poised to prevail in its mission to relegate the marriages of L.G.B.T.Q. people to second-class status in name of 'religious freedom.' It seems its true goal is not to advance its advocates' religious freedom but to restrict ours."

Many Catholic leaders, politicians, academics and ordinary people alike are part of this anti-religious-liberty movement, oftentimes claiming without irony to do so in the name of "religious freedom."

From a Catholic perspective, it is also important to note that religious freedom is a relatively new part of the universal teaching of the church, something that can only be traced back to the 1962-65 Second Vatican Council (note to those inclined to invoke the teaching yet reject the council). Therefore, there is also a clear theological and pastoral need to clarify how it is being understood and deployed.

Since at least the social and political battles over the Affordable Care Act more than a decade ago, the U.S. bishops' conference has invoked "religious freedom" to justify its personal objection to certain policies such as medical contraceptive coverage through insurance for employees.

The church itself teaches that all people have "a right to religious freedom" and that, as both Dignitatis Humanae and the Pastoral Constitution on the Church in the Modern World, Gaudium et Spes, state, even Catholic Christians have recourse to their consciences. Rather than recognize this, the bishops have instead sought to impose their religious views on others.

It seems that in recent years this sort of distorted and self-serving invocation of "religious freedom" has been used in more solipsistic and discriminatory ways. Such appears to have been the case with the agenda and lineup of speakers at a conference at Franciscan University of Steubenville, Ohio, earlier this month.

As my NCR colleague Brian Fraga reported, despite their different contexts and backgrounds (from university professors to media personalities to political candidates), the presenters shared a common sense of victimhood in decrying the current state of a pluralistic nation in which the right to religious freedom is enshrined in its constitution.

Fraga wrote: "Disaffected by secularization, social media censorship, the legal recognition of same-sex marriage and the widening societal acceptance of LGBTQ rights, the conference speakers described an America in crisis, where tyrannical forces in 'Big Tech,' media, academia, government and industry are cracking down on and isolating social conservatives and religious traditionalists in the United States."

In the post-Trump age, it should come as no surprise that many of those who share his political and ideological views are immune to the shame associated with rank hypocrisy. That is why I was not at all surprised to read that, as Fraga reported, "though the U.S. Constitution's First Amendment prohibits the establishment of an official state religion, several of the conference's Catholic speakers articulated their dissatisfaction with a religiously neutral American civil society."

Today, it seems that within many Catholic circles 'religious freedom' is only invoked by those who wish to suppress the rights and freedoms of others who may disagree with them.

Not only are such attitudes anti-American and unconstitutional, but they also fly in the face of the church's teaching about the inherent dignity and value of all people, especially in their fundamental right to exercise their religious freedom.

It strikes me as dangerous that self-identified Catholics, especially those in public office and positions of influence, are espousing such views. For as much as the U.S. bishops' conference is concerned with theological "coherence" around subjects like the Eucharist, and have pledged to spend millions of dollars putting on events related to this topic, there seems to be zero willingness to address the incoherence around religious freedom as it is on display at the Steubenville conference and beyond.

Part of the reason this is the case is because the bishops helped pioneer this self-serving strategy during its public fight with the Obama administration's effort to provide affordable health care for millions of Americans. On what authority could they prevent or stop others from using their same discursive playbook, adapting the language of "religious freedom" to play victim while advocating for policies and actions that suppress the rights and religious freedom of others?

Today, it seems that within many Catholic circles "religious freedom" is only invoked by those who wish to suppress the rights and freedoms of others who may disagree with them. But the core of both the American constitutional right and the Catholic Church's teaching is that religious freedom is not a zero-sum game, but a way of being in relationship with others and organizing a society rooted in an authentic understanding of the common good — where all people can live with their inherent dignity and value recognized.

Paulikas is correct, not just about his own fundamental civil and religious right to marry his spouse, but also about so many other instances in which historically minoritized, marginalized and oppressed communities of individuals are facing renewed threats of discrimination and violence because of this kind of dangerous rhetoric couched in the clothing of "religious freedom."