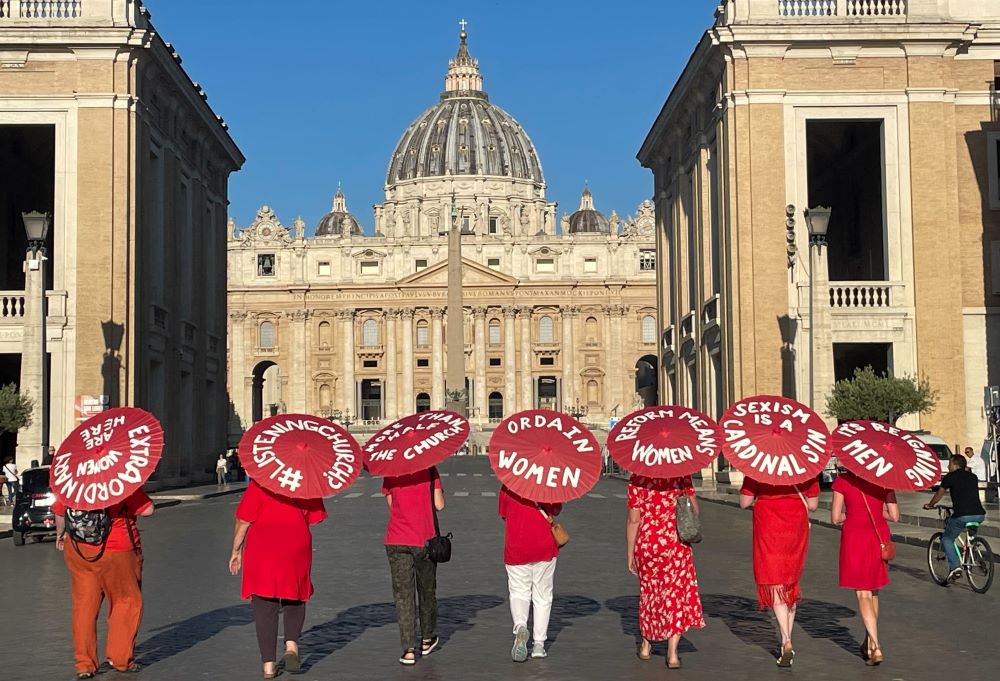 Women's ordination advocates walk toward St. Peter's Square as part of a witness on Aug. 29. The author notes that women's issues in the church — including ordination to the diaconate and priesthood — is showing up in national synod syntheses from all over the world. (NCR photo/Christopher White)

I was pleasantly surprised that the U.S. bishops' national synthesis for the Synod on Synodality explicitly named "hot button" issues such as women's ordination, LGBTQ+ inclusion and the need for freedom to speak up on controversial issues without fear of being silenced.

Synthesis writers are to be congratulated for compiling a comprehensive, transparent document featuring input from "over 22,000 reports from individual parishes and groups." Many other important ecclesial issues are also named that I shall not address here, but the text is well worth the read.

Also worth reading are reports from the National Association of Lay Ministry and FutureChurch, both of which address important issues in U.S. parish life, such as lack of financial and formational support for lay ministers, parish closings — especially in urban areas — and increased clerical discrimination against women.

I was among those who doubted that any "elephant-in-the-sanctuary" issues would be found in the final national draft. For more than 20 years, I — and many like me — were banned from church property for giving programs on women's leadership and the call to ordination. Mercy Sr. Carmel McEnroy even lost her tenured teaching position for publicly supporting women's ordination.

While I am encouraged to see more inclusive processes, there are no guarantees that any 'hot button' issues will advance as the synod phases unfold.

Other individuals and groups were banned for speaking up about LGBTQ+ advocacy, the canonical rights of Catholics and their parishes in the church, and the need for bishops to be held accountable for clergy sex abuse. It was not a good time for listening — or for lay inclusion in church decision making.

So now I have a bit of whiplash. Now women's issues in the church — including ordination to the diaconate and priesthood — is showing up in national synod syntheses from all over the world. Being a bit on the obsessive-compulsive spectrum, I spent last weekend googling every national synod synthesis I could find.

I discovered 18 national syntheses and/or media summaries — some of which included whole regions such as Asia and the Amazon and Latin America. Virtually every synthesis named "women’s role in the church," LGBTQ+ inclusion and the need for lay inclusion (often dubbed "co-responsibility") in church decision-making at every level of church leadership. Over 70% included women's ordination to the diaconate or priesthood as a way of including women in leadership. All of Canada's regional sessions reported "requests that women be granted access to ordained ministries." 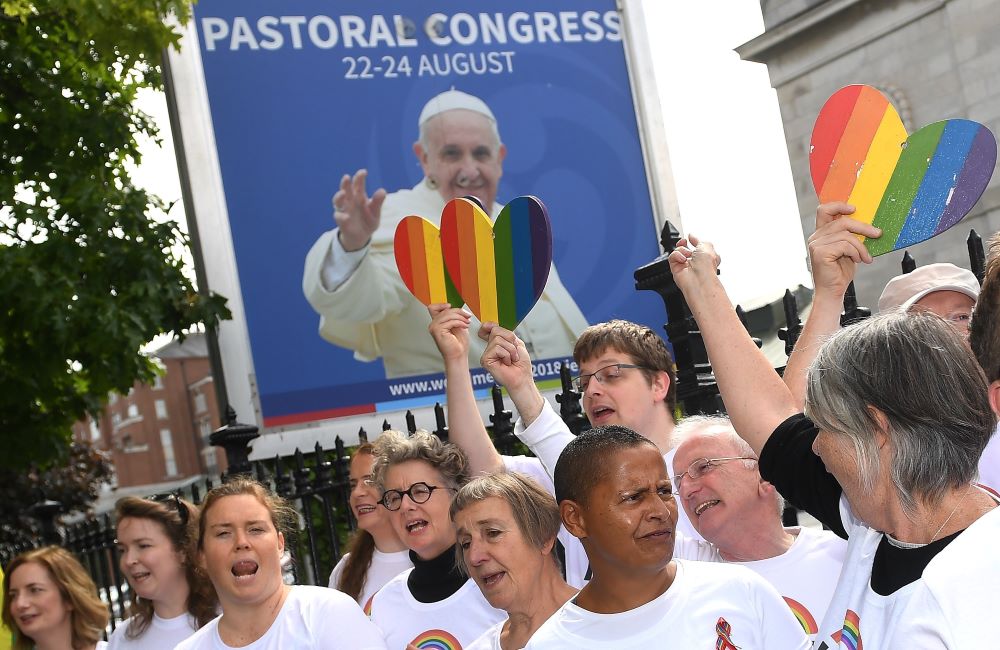 Virtually all national syntheses said that although participants were at first skeptical, by the end of the process they expressed great appreciation for a "synodal way of being church" and want it to continue. Great love for the church, despite all of its flaws, was universally in evidence, as was appreciation for priests and sisters, and love for the Eucharist.

Considering the massive amount of energy the Catholic people — lay and priestly alike — have put into practicing synodality, it seems clear that the synodal process has the potential to be a very big deal for our future ecclesial life. In a recent interview with America magazine, Cardinal Mario Grech, secretary-general of the Synod of Bishops, agreed. Citing Pope Francis' Apostolic Constitution, Episcopalis Communio, Grech said, "[T]he synod is not an event celebrated once every three years but is a process: a process that has a beginning but, believe me, I don't think will have an end, even the present synod that we are celebrating."

So what happens next? By the time synod bishops meet next October, won't this promising beginning be watered down? Plus, despite these honest — grounded in the Holy Spirit—contributions, won't the final decisions (or "discernment" as Grech prefers to call it) be made only by bishops? 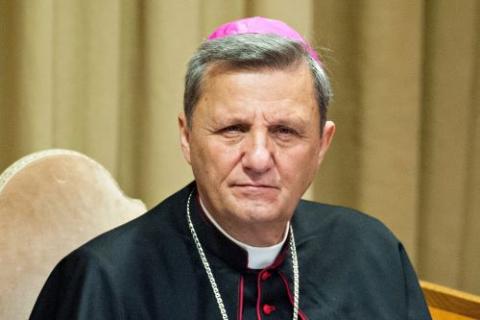 Maltese Cardinal Mario Grech, secretary-general of the Synod of Bishops, is pictured at the Vatican in this Oct. 7, 2019, file photo. (CNS/IPA/Sipa USA via Reuters)

Continuing my obsessive predilection, I diligently researched who makes what decisions (discernments) from here on. Here is what I discovered:

To my surprise, synod procedures include laymen and laywomen at every phase of the process, and each phase is designed to build on the previous one. A 35-member international body — which Grech describes as "a mix” of religious and laypeople, men and women, with only two bishops," — met Sept. 22-Oct. 2 in Frascati, Italy, to study the national syntheses and draft a new “Document for the Continental Stage."

This document will guide the second "continental" phase of the synod consultation. For the last two days of the Frascati meeting, roughly 15 members of the Bishops' Synod Council will join the gathering to review their draft before sending it to Pope Francis for signoff. (Members of the Synod Council were elected at the Ordinary Synod on Youth in 2018).

According to NCR Rome correspondent Christopher White, there are two North Americans in the Frascati group: U.S. theologian Kristin Colberg and Jesuit Fr. David McCallum. Colberg is on the theological commission advising the synod secretariat and an associate professor at St. John Seminary at Collegeville, Minnesota. McCallum is the executive director of the Discerning Leadership program, a collaboration between Le Moyne College and the Society of Jesus, which aims to "help support Pope Francis' vision for the reform and renewal of the Church through the process of discernment and co-creative synodality."

The final version of the continental document will be made public by the end of October. It will then be sent to the world's bishops to study before they participate in one of seven continental assemblies. 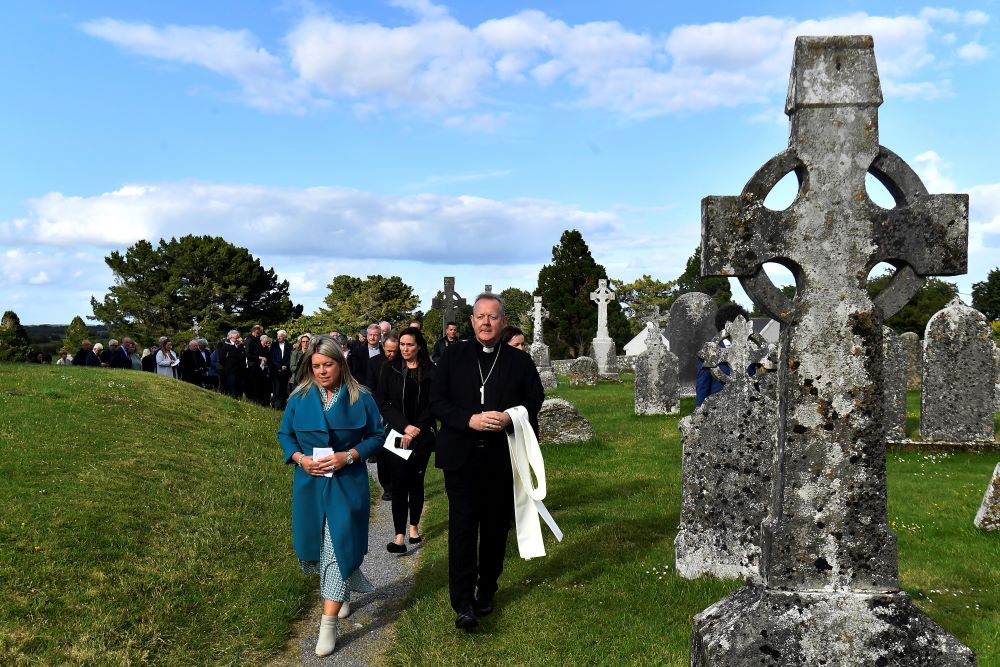 Archbishop Eamon Martin of Armagh, Northern Ireland, leads delegates on a prayer walk at a pre-synodal assembly in the sixth-century monastic site of Clonmacnoise in Ireland June 18, 2022. (CNS/Reuters/Clodagh Kilcoyne)

The synod secretariat explicitly directs that these "should be Ecclesial Assemblies (of the entire People of God) and not only Episcopal Assemblies (of bishops only). Thus, the participants should adequately represent the variety of the People of God: bishops, priests, deacons, men and women religious, laymen and laywomen."

Significantly, this arrangement corresponds to the wish of the majority of the bishops' conferences consulted on the subject by the General Secretariat of the Synod.

The continental phase for North America is comprised of the U.S. and Canada. A communiqué from the U.S. bishops' conference describes regional listening sessions that will reflect on the continental document, to be held in late 2022 and early 2023. These will "inform the composition of the Continental Synthesis," which will be sent to the Synod Secretariat by March 31, 2023, the deadline for all seven continental syntheses. The seven continental documents then become the basis for the final working document — the Instrumentum Laboris — for next October's synod.

While I am encouraged to see more inclusive processes, there are no guarantees that any "hot button" issues will advance as the synod phases unfold. In a second America article, Grech indicated the topic of married priests "needs more time," and while he acknowledged a "widespread" desire to consider women's roles in greater depth, his awkward phrasing did not inspire confidence: "And [with] the fact that various churches are taking this same issue seriously, I really hope and pray that in time we will manage to find what is the right vocation of women in the church."

Yet perhaps the first issue is to build an infrastructure for lay inclusion in church decision-making. It seems to me that the worldwide synodal consultations are doing just that.

It should be said that all phases of the synod are consultative (not deliberative), including the 2023 synod itself, unless the pope chooses to grant it deliberative voice (Episcopalis Communio 3). This being Catholicism, the pope has the final word.

Yet there can be no doubt that throughout his papacy Pope Francis has gone to great lengths to prioritize an expanded voice for the laity. Two of his apostolic constitutions, Episcopalis Communio and Praedicate Evangelium, create pathways for synodal discernment and lay decision-making in church governance. Praedicate Evangelium actually separates church governance from ordination, locating it instead within a "canonical mission" received from the pope. Last July, Cardinal Marc Ouellet — who is not known for being a progressive — said the pope "can also delegate and thus make members of God's people participants in his power of jurisdiction."

So will any laypeople be granted voice — even deliberative voice — at next October's synod? Stay tuned.