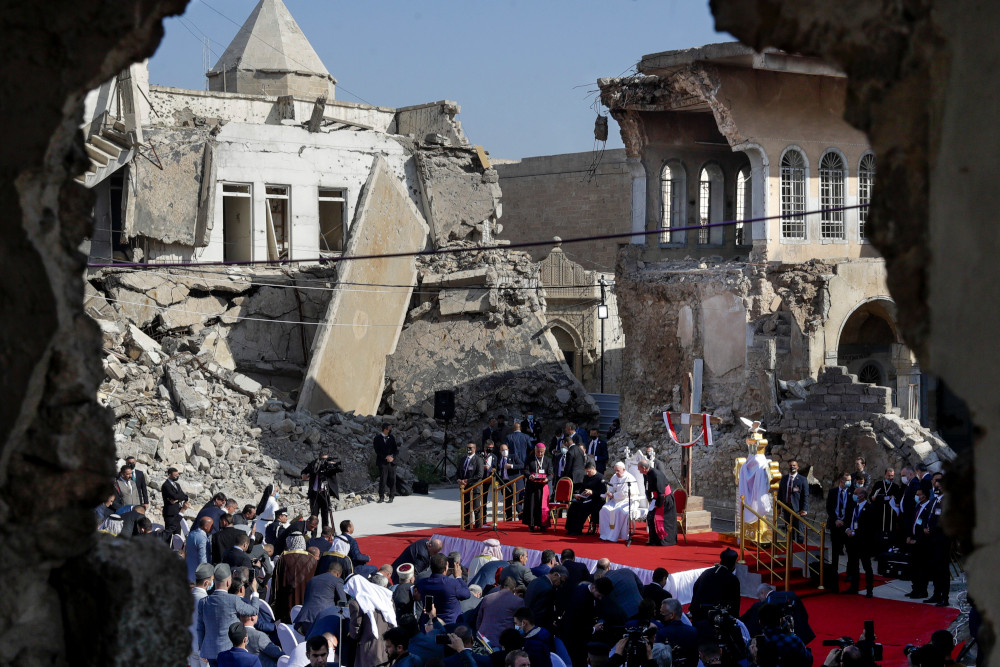 Pope Francis, surrounded by shells of destroyed churches, leads a prayer for the victims of war at Hosh al-Bieaa Church Square, in Mosul, Iraq, once the de-facto capital of IS, Sunday, March 7, 2021. The long 2014-2017 war to drive IS out left ransacked homes and charred or pulverized buildings around the north of Iraq, all sites Francis visited on Sunday. (AP/Andrew Medichini)

Despite the naysayers who opposed the pope's visit, Pope Francis' pilgrimage to Iraq (March 5-8) went beyond expectations in achieving the three goals of his trip: showing pastoral solidarity with his suffering Christian flock, calling for peace and reconciliation for the Iraqi people and establishing improved relations between Christians and Muslims.

In the run-up to the trip, many in and outside the Vatican warned that the visit was not timely. They feared for the pope's security and feared that the visit's various events would be hives of COVID infections.

Despite the risks, Iraqis wanted him to come. Popes going back to St. John Paul II have been trying unsuccessfully to visit Iraq. There has not been and probably never will be a good time to visit Iraq.

Inside Iraq, it was harder to find people opposing the papal visit. The government wanted to show, by hosting such a high-profile world leader, that Iraq is safe and open for business. Christians wanted their pastor to comfort them and showcase their great suffering. Muslims wanted him because they see him as someone who respects Islam and promotes reconciliation and peace.

Long after the COVID-19 pandemic is forgotten, Christians and Muslims will look back at the papacy of Francis as a turning point in their relationship. After the Second Vatican Council (1962-1965), popes began reaching out to dialogue with Muslims. John Paul II met and prayed with Muslims. And although Pope Benedict XVI's missteps temporarily interrupted dialogue, Francis has been extremely successful in improving relations.

Francis hopes that rather than being part of the problem, religion can become part of the solution in the Middle East. At Ur, the birthplace of Abraham, he told an interreligious gathering, "Hostility, extremism and violence are not born of a religious heart; they are betrayals of religion."

For most Iraqis, the high point of the pope's visit was his 45-minute meeting with Grand Ayatollah Ali al-Sistani in Najaf, the third holiest pilgrimage site for Shiite Muslims after Mecca and Medina. Al-Sistani, who almost never meets with foreign dignitaries, is considered the most influential leader of Shiite Muslims.

Francis had already met with leading Sunni Muslim leaders, such as Sheikh Ahmed el-Tayeb, the grand imam of Al-Azhar in Egypt, with whom in 2019 he signed a document on human fraternity. Reaching out to both Muslim communities has been a priority for the pope.

Many had hoped that the pope and al-Sistani would also sign a joint statement; they didn't, but doors have been opened for future talks and dialogue. In any case, a picture is worth a thousand words.

After the meeting, the Vatican said that the pope had "stressed the importance of cooperation and friendship between religious communities for contributing — through the cultivation of mutual respect and dialogue — to the good of Iraq, the region and the entire human family."

The pope also praised al-Sistani "for speaking up — together with the Shiite community — in defense of those most vulnerable and persecuted," and for standing up for the dignity of human life.

Al-Sistani, for his part, issued a statement saying Christians should "live like all Iraqis, in security and peace and with full constitutional rights." He affirmed the "role that the religious authority plays in protecting them, and others who have also suffered injustice and harm in the events of past years."

The pope's visit was given positive coverage in the Iraqi media and in other Muslim countries, including Iran. A major Iranian newspaper referred to the two leaders as "standard bearers of world peace" and to the meeting as "the most effective event [in the history of] dialogue between religions." 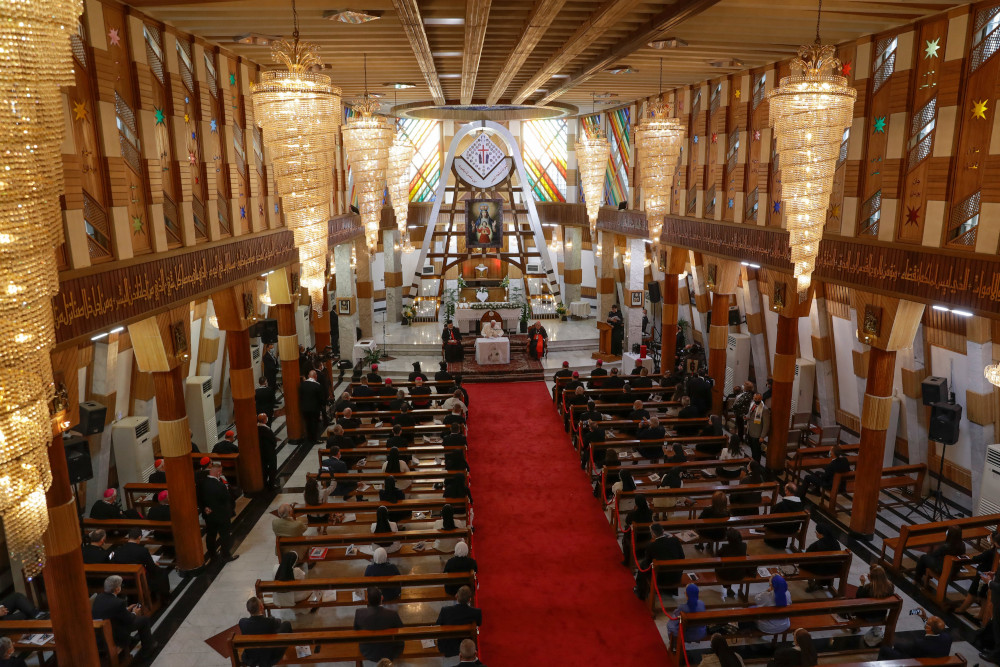 Pope Francis delivers his speech during a meeting with bishops and priests, at the Sayidat al-Nejat (Our Lady of Salvation) Cathedral, in Baghdad, Iraq, Friday, March 5, 2021. Pope Francis has arrived in Iraq to urge the country's dwindling number of Christians to stay put and help rebuild the country after years of war and persecution, brushing aside the coronavirus pandemic and security concerns. (AP/Andrew Medichini)

Iraqi Christians also welcomed the meeting with al-Sistani, which they hoped would lead to better treatment of Christians in Iraq, who lived peacefully under Saddam Hussein but have been suffering in Iraq since the American invasion in 2003. John Paul II predicted this when he tried to talk President George W. Bush out of the war. Matters got even worse with the rise of the Islamic State group, which waged genocide against Christians, Shiites and others who did not share its beliefs.

As a result, the Christian population of Iraq fell from 1.4 million in 2014 to only 300,000 today. Church leaders feared that without a papal visit, this exodus of Christian refugees from Iraq would continue.

The pope's visit highlighted the suffering of Iraqi Christians and tried to give them hope. In the Assyrian Catholic cathedral in Baghdad, where nearly 50 people were killed in a 2010 terrorist attack, he appealed for "forgiveness, reconciliation and rebirth" in Iraq.

"We are gathered in this Cathedral of Our Lady of Salvation, hallowed by the blood of our brothers and sisters who here paid the ultimate price of their fidelity to the Lord and his church," Francis said. "Christians are called to bear witness to the love of Christ in every time and place. This is the gospel that must be proclaimed and embodied in this beloved country as well."

Whether the papal visit will stop the exodus of Iraqi Christians and encourage refugees to return remains to be seen, but the community clearly welcomed the pope's visit and the attention it brought to their plight.

"Now is the time to rebuild and to start afresh, relying on the grace of God, who guides the destinies of all individuals and peoples," the pope said in Qaraqosh, a Christian town in Iraq's Nineveh Plains, which was devastated during the war with the Islamic State group. "You are not alone! The entire church is close to you, with prayers and concrete charity."

The pope also called on all Iraqis to work together for peace and criticized countries selling arms to the combatants.

"The religious, cultural and ethnic diversity that has been a hallmark of Iraqi society for millennia is a precious resource on which to draw, not an obstacle to be eliminated," the pope reminded Iraqis. "Iraq today is called to show everyone, especially in the Middle East, that diversity, instead of giving rise to conflict, should lead to harmonious cooperation in the life of society."

This pope has been willing to take risks, even with his own life. Sadly, some during the visit did not wear masks or keep social distance. Time will tell whether the increase in infections is significantly greater than what would have occurred anyway.

This pope clearly likes to travel and his trips have proved to be very good for the church and humanity. But it was obvious that his sciatica was causing him pain when walking during the visit. How many more trips does he have in him? Granted his successes in promoting religious freedom, peace and interreligious understanding, let us hope for many more trips.