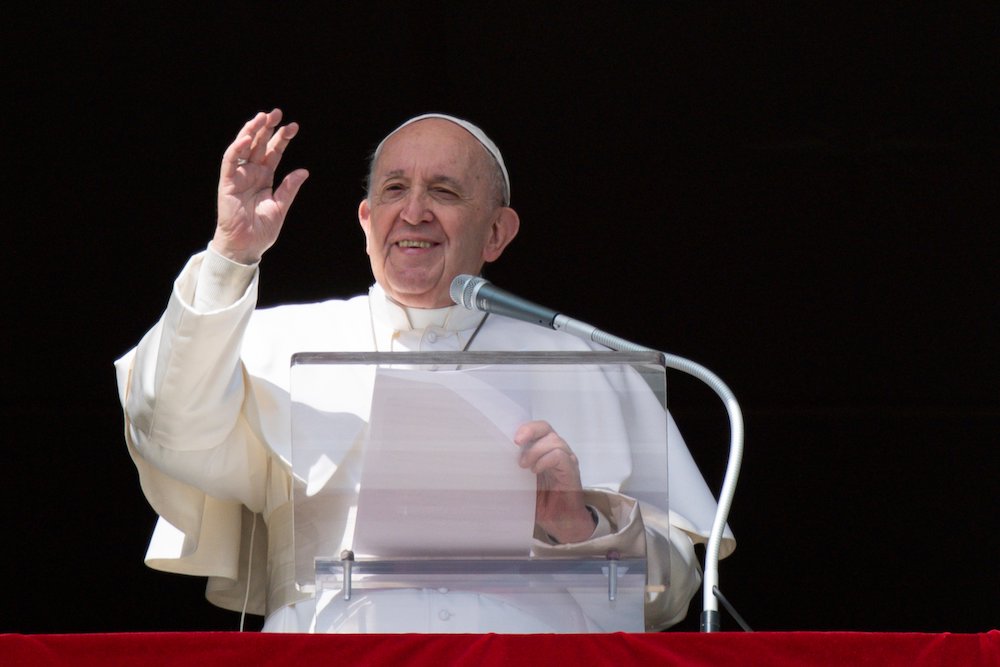 Pope Francis greets the crowd as he leads the Angelus from the window of his studio overlooking St. Peter's Square at the Vatican Feb. 28, 2021. In his Angelus address, he encouraged people to read the Gospel during Lent and fast from gossip. (CNS/Vatican Media)

Pope Francis shows an enigmatic side when dealing with the hot-button issues of sexuality and gender. He is at once the soul of compassion for many church dissidents and an unbending keeper of Catholic law, an open mind on solving human and earthly crises whose reform instincts stop at formal Catholic teaching.

The seeming paradox captured world attention early in Francis' papacy when he responded to a reporter's question about homosexual activity, considered immoral by Catholic doctrine. "Who am I to judge?" he famously said. It was at once hailed by some as a re-definition of church ethics and seen by others as a way of saying that he wasn't taking a position on gay activity because the previous popes had already judged it immoral. Pope John Paul II had shockingly reinforced that censure in 1986, insisting that Catholics never be led to "believe that the living out of this orientation is a morally acceptable option. It is not." Maybe Francis was verbally hinting that change wasn't in order, but he didn't say so.

The pope has exhibited similar ambivalence toward other heated debates over church teaching, empathizing with those on the wrong side of church law while refraining from reforming the barriers. He can come close. On Jan. 29, for example, he again exhorted world leaders of marriage annulment to press ahead with changes he had made to ease the procedure in 2015. Exhibiting his boundless empathy, he repeated his appeal for the well-being of children affected by family disruption and called for an end to financial charges for the procedure, a factor that is widely believed to discourage annulments. Important issues, to be sure, but without action affirming or ending the practice itself, which opponents claim to be an awkward method amounting to secular divorce by another, rationalized name.

"Spouses and children constitute a community of persons," he told the Rome assembly, "which is always and certainly identified with the good of the family, even when it has crumbled." At the heart of the church's approval of annulment is the church decision that a "valid" marriage never actually took place, a conclusion many Catholics believe to be virtually impossible.

Francis' has also used similar approach, favoring practical improvements in treatment of women, celibacy and eligibility for Communion, appealing for better treatment of protestors against church teaching, raising the specter of reform without amending policy itself. Francis' warmth and welcome toward disaffected Catholics makes them believe that he will logically take the next step by revising church law. But it hasn't happened. He seemingly tiptoes to the edge but stops there.

I once thought this shifting between reflexive empathy and apparent default to papal conformity was a deficiency, but no longer see it that way. That ideal is unfair to me and everyone else. It's not wrong to insist on consistency where it is deemed imperative, as when teachers are expected to use common measures to grade students, but it is unreasonable to demand in the course of daily pressures from competing appeals. Conflicts unavoidably arise, consciously or not, in any mind, including the pope's. My own inner contradictions, usually unrecognized, provide my own object lesson. Forcing harmony is only a superficial effort to reconcile what cannot be easily mended.

Therefore, Pope Francis seems better suited as the guardian angel of the faithful's ambivalence, so broadly experienced by Catholics and non-Catholics. It is an ambivalence that is often mistaken for muddle-headedness. It is, rather, a humility born of differing claims of truth about the same things that compete for our allegiance. It happens among those who believe modern insight compels basic reforms like the ordination of women yet feel the pull of tradition that took root at an earlier time, those who embrace feminism but retain something of the claim that the church can't ordain women because "Jesus only chose men." Or those who back full admission to Communion of remarried Catholics without annulments but aren't quite ready to abandon the catechism's absolutes against it. 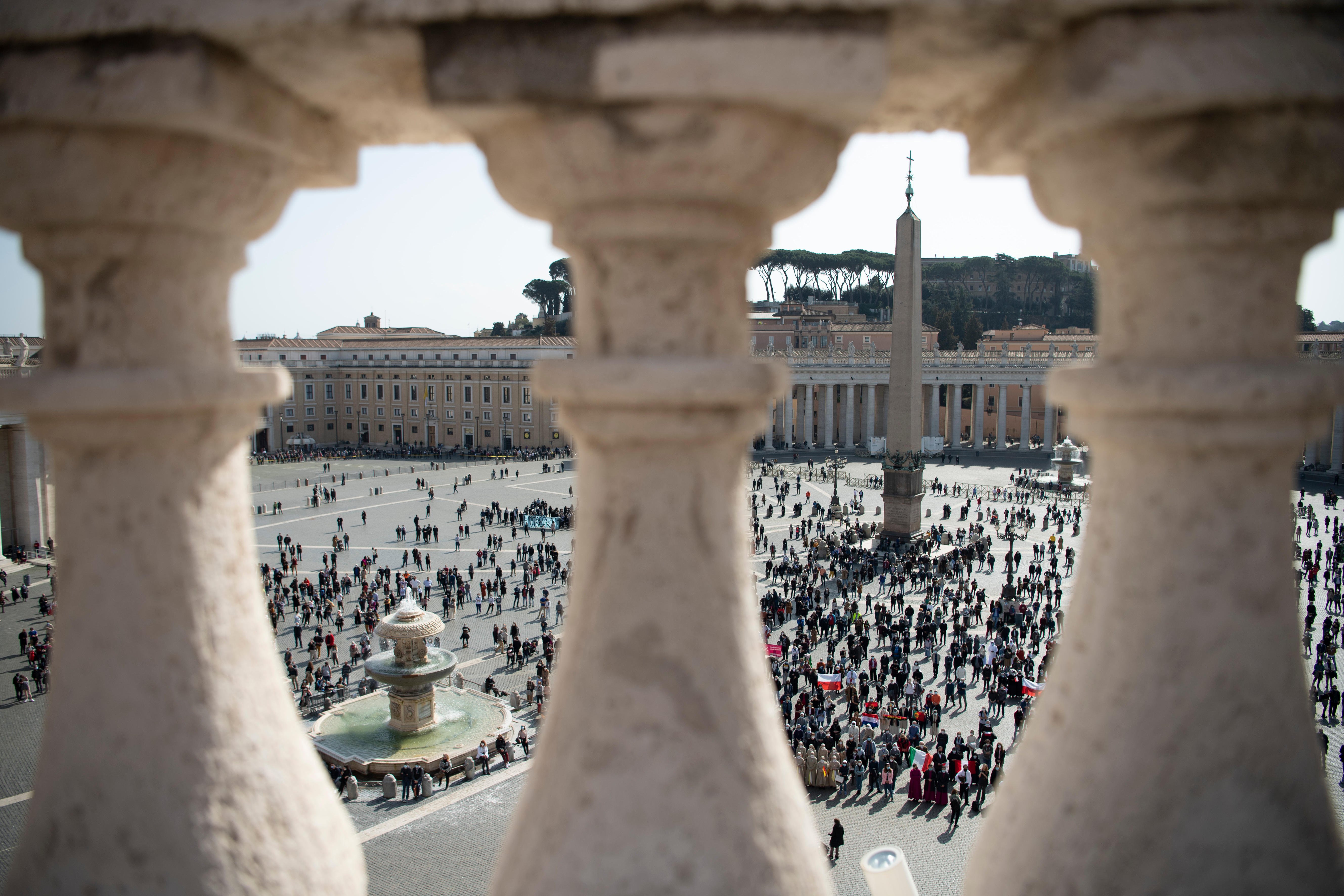 People attending the Angelus led by Pope Francis are seen from the window of his studio overlooking St. Peter's Square at the Vatican Feb. 28, 2021. (CNS/Vatican Media)

Francis may be unwavering in his support to both papal conformity and the anguish of dissidents to one degree or other as genuine ambivalence. He qualifies as the patron saint of the likewise troubled.

That doesn't mean knowing where ambivalence belongs and where it doesn't. I look at Francis as a man of his times, open to vast stores of new ideas and discoveries, a Jesuit and an alert, curious citizen of the world, whose learning and passion enabled him to write a sophisticated clarion call to the climate crisis, "Laudato Si', on Care for our Common Home." How could an informed, astute mind such as his not at the same time be persuaded by equally powerful evidence that women are entitled to full equity, from hearth to altar — or how the findings of biology and anthropology wouldn't convince him to give up ambivalence toward homosexuality restrictions that he seems to chafe against.

The fact that he hasn't reformed these teachings is for him to discern and for me to grant him slack. I suspect most every one of his admirers and detractors deserves an ample measure of acceptance for similar inner tensions. Francis was raised in the lingering certainties of Vatican I, including its promulgation of papal infallibility. Not only does that make it difficult to ignore the authority of a core of doctrine set down in a more static Catholicism but also its lasting fix on consciousness, which has been well documented. Aside from that, Francis is a people person whose identity with the magisterium hampers his ability to disagree with previous popes or to strike out on his own.

By comparison, he doesn't shy away from criticizing behavior he believes blunts or betrays Gospel treatment of others. A primary target is clericalism, the imposition of imperious habits and superior attitudes that inhibit Christian qualities of dignity and integrity. His critical tendencies also extend to secular concerns with human rights, economic exploitation and environmental destruction.

On the whole, Francis is a creative presence who responds to people with mixed loyalties, with priorities that don't quite fit together, and can project support for all those needing to see their ambivalence and accept it. The pope can be someone in that company who is trying to figure out some things rather than as a pure exemplar of a higher being. Francis never appears to want to be pictured that way anyhow. It's what spawns his common touch. Francis is your ambivalent friend in search of reconciliation who doesn't pretend to have all the answers either. And gives you room to be humanly uncertain as he tries to give himself. On the road with you.

I'm still waiting for a day he will finish his remarks on a hot-button issue with a stunning punchline that will get to the heart of the matter.