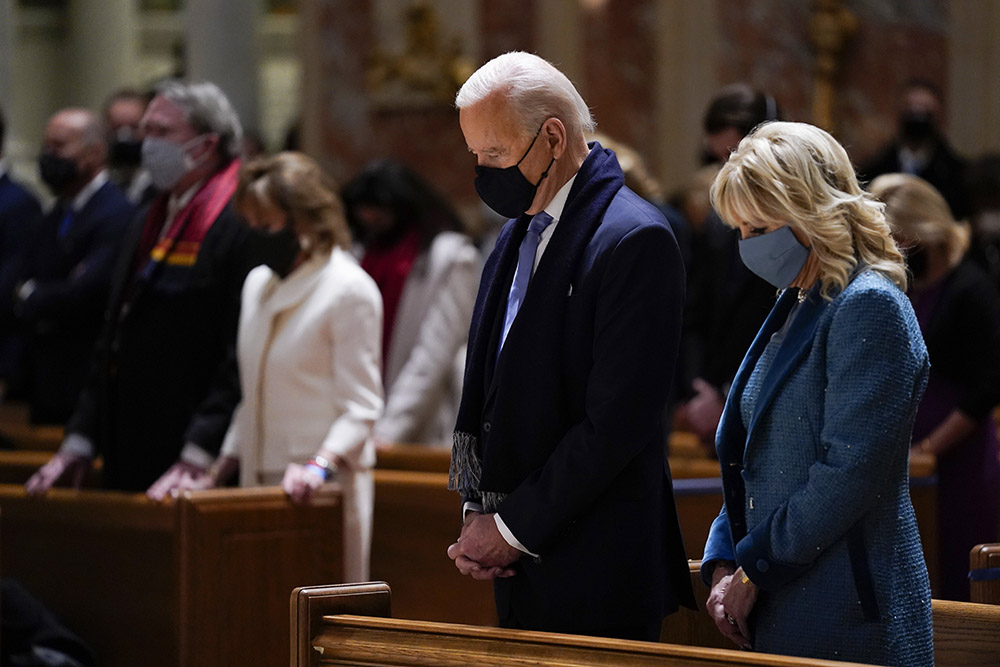 On Jan. 20, then-President-elect Joe Biden and his wife, Jill Biden, attend Mass at the Cathedral of St. Matthew the Apostle during Inauguration Day ceremonies in Washington. (AP Photo/Evan Vucci)

Recently, a handful of American Catholic bishops have issued statements questioning whether anyone who supports abortion rights should be receiving Communion, and journalists immediately pounced: Will President Joe Biden, they wanted to know, be denied Communion by the U.S. bishops' conference because of his pro-choice position on abortion?

Journalists, here's your answer: This is a stupid story for canonical, theological and political reasons.

First, and foremost, the U.S. Conference of Catholic Bishops does not have the canonical authority to tell Biden that he cannot go to Communion.

During the papacy of John Paul II, Cardinal Joseph Ratzinger, then head of the Congregation for the Doctrine of the Faith, emphasized the limited authority of bishops' conferences. Who can or cannot go to Communion in a diocese is to be decided by the local bishop, not the bishops' conference. The most the conference can do is make recommendations to local bishops.

If the bishops' conference wants the authority to decide such matters, it will need to request an exception to church law from Rome. This request requires a two-thirds vote of the conference bishops and Rome's approval for the exception. It is highly unlikely that the pope would approve such an exception. The odds are that the Vatican would not even respond to the request while Biden is in office.

As a result, as long as Biden resides in Washington, D.C., and goes to church there, it will be Cardinal Wilton Gregory who determines whether he can go to Communion. Gregory has said he will not stop Biden from going to Communion.

When Biden is in his home state of Delaware, it will be up to the local bishop there. Delaware has just gotten a new bishop, and while his predecessor allowed Biden to go to Communion, the new bishop has not yet made his position known.

Likewise, when Biden is traveling around the country, it will be the local bishop wherever he goes to Mass who decides whether he can go to Communion or not.

Second, theologically, no one is worthy to go to Communion. We are all sinners, and it is God's gracious kindness and love that invites us to the Lord's table. We do not earn the right to Communion.

As Pope Francis would say, the church is a field hospital for the wounded. It is not a country club for the elite. This attitude has led Francis to make it easier for divorced and remarried Catholics to go to Communion.

Every Catholic is asked to reflect on their attitude as they approach Communion, but it is exceptional when church officials block an individual from Communion.

Related: We need more from Catholic bishops than a mixed response to racism

Some bishops believe that certain issues are so grave that they should be grounds for stopping someone from going to Communion. Putting aside the merits of the debate, there are practical problems. For example, which issues should make the list?

Everybody has their list of people who should be denied Communion. Who is to decide?

When he was archbishop of Chicago, Cardinal Francis George, no liberal, put it succinctly when he said he did not want his priests playing cop at the Communion rail. We should also remember that St. John Paul II gave Communion to pro-choice politicians, notably former British Prime Minister Tony Blair (not even a Catholic at the time) and the mayor of Rome.

All of this leads to my third conclusion, that this is all about politics, not the Eucharist.

So, what is going on? It is politics.

The Democratic Party has abandoned any semblance of giving space to opponents of abortion. During the 2020 presidential primaries, no serious Democratic candidate even supported the Hyde Amendment, which forbids federal spending on abortion. Biden, who had supported the amendment during his entire political career, changed his position before the campaign, even though a majority of Americans oppose federal funds for abortions.

Opponents of abortion see no alternative to the Republican Party, and they are willing to wage war on Democrats no matter what. The Communion wars are part of this political strategy, not any spiritual one. Republicans know that the Communion wars are catnip to journalists, and Republicans and their episcopal allies prefer these stories to those describing Biden's efforts on COVID-19, infrastructure, climate change and jobs.