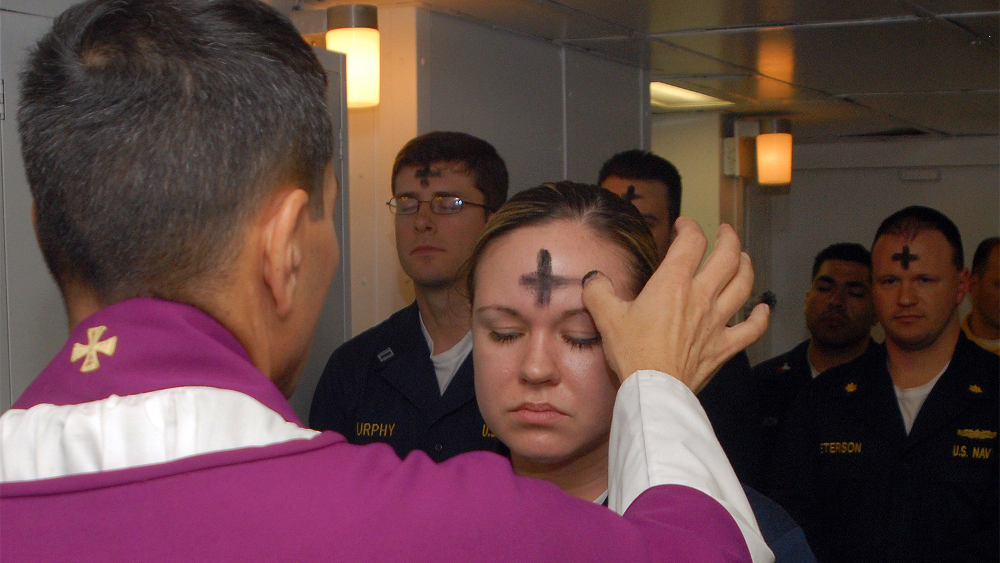 "What are you giving up for Lent?" is a question Catholics direct at each other this time of year. "Giving up" usually applies to food, in keeping with the church’s ancient practice of fasting. We moderns have found the idea of fasting can also apply to habits like television or social media.

Fasting is seen as a way of doing penance for sin as well as being united with Jesus, who spent 40 days fasting in the desert. The practice of fasting during the 40 days of Lent used to be mandatory for Catholics, with no eating between meals. Also, breakfast and lunch combined were not supposed to be more than your main meal.

While fasting is not obligatory anymore, it is encouraged. We should, of course, put a priority on giving up those things we should not be doing anyway: smoking, drugs, pornography, junk food, too much alcohol, etc.

Doing something, rather than giving up something, is also an option — regular exercise for many people, including me, is a penance.

When Jesuit Fr. James Martin’s non-Catholic college roommates found out he was planning to give up something for Lent, they responded that he shouldn’t be the one to decide; he could cheat and pick something he didn’t care about anyway. So began a tradition of his roommates telling Martin what he had to give up each Lent.

The medieval rules for fasting had the effect of forcing the upper classes to eat like poor people, who, by comparison, were always fasting. So, if you really want to get into the spirit of Lent, try surviving on what can be bought with a month's worth of food stamps — which aren't valid for alcohol or hot prepared foods. Give what you save to the poor.

Another way to update Lent to the needs of the 21st century would be a carbon fast. If we all cut our carbon consumption during Lent that would not only be a good penance, it would help the planet. Likewise, many churches are encouraging members to give up plastic for Lent.

Fasting is only one way to observe this ancient tradition. You can also choose to be nourished by the Word of God. The daily liturgical Scripture readings during the 40 days before Easter were specially chosen for the education of catechumens, those who wanted to become Christians. To prepare for their baptisms at the Easter Vigil, the catechumens were invited to the cathedral each day, where the bishop would explain the faith to them using the Scripture readings.

In a sense, these readings were the original catechism of the Catholic Church, in an era before widespread literacy and mass-produced books. They are a collection of the greatest passages from Scripture. For those who are already baptized, they are a refresher course in what it means to be a Christian.

Ideally, the best way to hear these readings would be to go to daily Mass during Lent, but if that is not possible, there are lots of ways to find the Lenten readings for yourself. The U.S. Conference of Catholic Bishops has them on its website. An app called iBreviary can be downloaded to your smartphone or tablet.

Using the podcast New American Bible or NAB, you can listen to the readings while commuting or walking (exercise body and soul at the same time). Or you can have Alexa read them to you using her skill "Catholic Daily."

I tend to listen to Alexa while going to sleep or waking up in the morning. She makes me laugh every time she mispronounces "responsorial," as in "responsorial psalm." For the last couple of weeks she was also having trouble with the Book of Sirach. The NAB uses humans who don’t make these mistakes. You might even recognize your bishop’s voice every once in a while as bishops, priests and laity were used in recording the readings.

For a long time, sadly, Catholics were discouraged from reading the Bible, but today the church promotes the readings from Scripture. The daily Scripture readings during Lent are a great way to reintroduce yourself to God's Word.

The word "Lent" means "spring," a time for renewal and new birth. Along with the sacraments, it is the Scriptures that renew us and give new life to the Christian community. Whether you read or listen, the Word of God is essential to the Christian life. That is something to do for Lent.