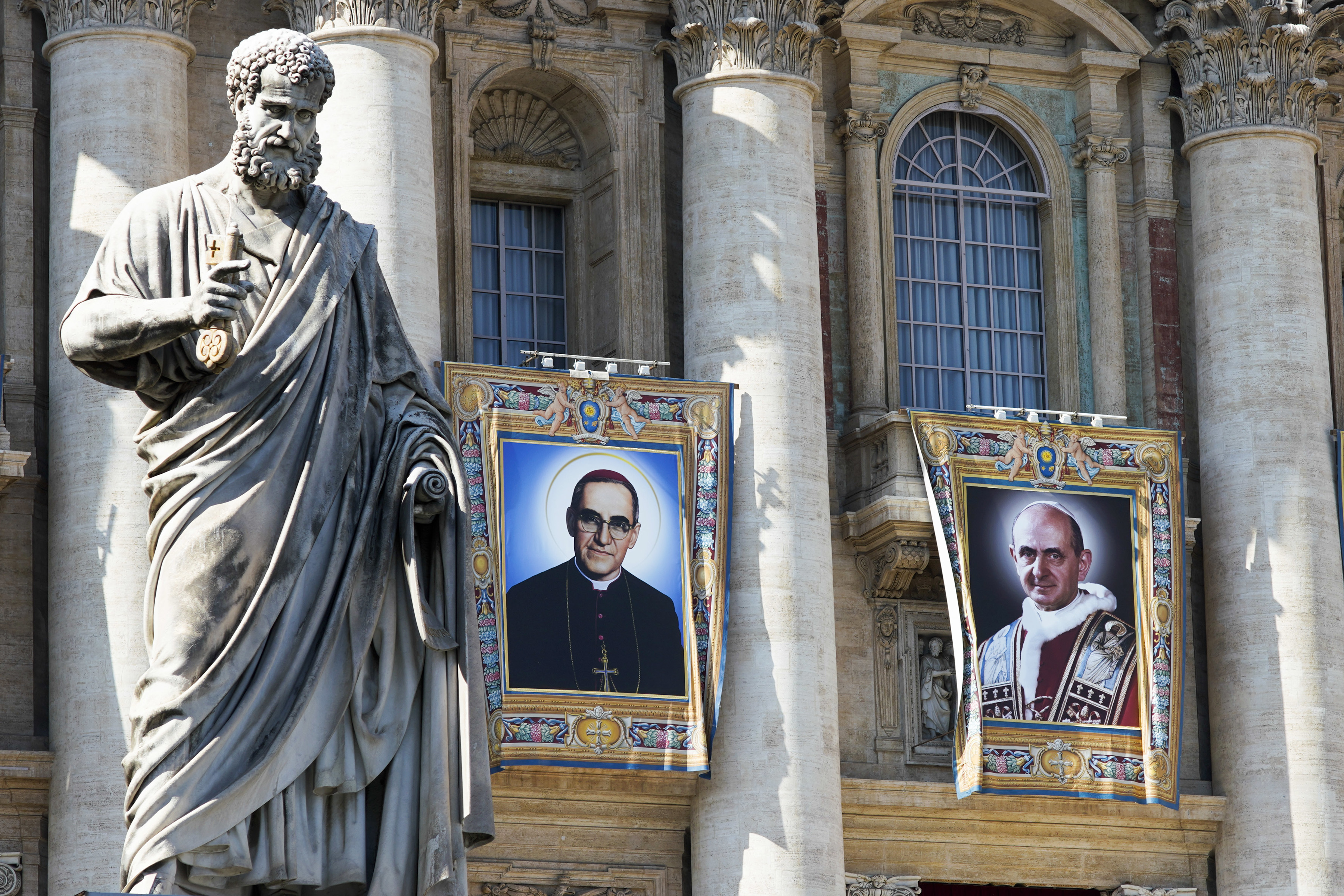 Tapestries of Roman Catholic Archbishop Óscar Romero, left, and Pope Paul VI hang from a balcony of the facade of St. Peter’s Basilica at the Vatican on Oct. 13, 2018. The next day, Pope Francis canonized the two as models of saintliness for the faithful today. (RNS/AP/Andrew Medichini)

On a beautiful October Sunday in Rome, Pope Francis canonized two of his favorite people, Pope Paul VI and the Salvadoran Archbishop Óscar Romero, who was murdered in 1980 because of his defense of human rights and the poor. The canonization took place outside in a packed St. Peter's Square on Oct. 14.

Their canonizations did not occur without controversy.

Paul VI (1963-1978), a Vatican insider who spent most of his priestly life working in the Roman Curia, became the pope who brought to a successful conclusion the Second Vatican Council, which attempted to update Catholicism to the needs of the modern world.

In his quest for consensus in the council, progressives felt that Paul too often gave in to conservatives to win their votes. Passages put in to satisfy the conservative minority, such as those on the role of the hierarchy, were later used to influence how the council is interpreted to this day.

He also was the pope who oversaw the translation of the liturgy into the vernacular as well as the elimination of many of the monarchical trappings of the papacy. He wrote a number of documents, including Evangelii Nuntiandi (Evangelization in the Modern World), which said that evangelization was not complete without working for justice, peace and human liberation. Francis quoted this document extensively when writing his own document on evangelization, Evangelii Gaudium (the Joy of the Gospel).

But Paul is mostly remembered for his encyclical Humanae Vitae (Of Human Life), which included a ban on any use of artificial contraceptives. The overwhelmingly negative response to this teaching by theologians and the faithful overshadowed his papacy.

Paul VI is added to the list of recent popes canonized, including John XXIII and John Paul II. Undoubtedly when Benedict and Francis die, there will be agitation to canonize them.

I find this rush to canonize recent popes unseemly at a time when the church needs to showcase lay examples of holiness to inspire ordinary Catholics in their lives. Canonization is often an attempt to put a halo over all the activities of a pope. For example, conservatives have noted that Pope Paul's canonization takes place on the 50th anniversary of the publication of Humanae Vitae.

The canonization of Archbishop Romero was even more controversial. In life he got little support from his fellow bishops in opposing the brutal military regime governing El Salvador. He was labeled a Communist by his opponents simply because he sided with the poor and told soldiers not to kill their brothers and sisters.

He also had opponents in the Vatican Curia who thought he was too liberal. After he was killed, many did not want to call him a martyr, saying he was killed because of politics, not because of the faith.

Traditionally, martyrs were killed because of some article of the faith. John Paul II expanded the notion of martyrdom to include Maximilian Kolbe, a Polish Franciscan who volunteered to die in place of another inmate in Auschwitz.

The concept of martyrdom was thus expanded to include being killed for acting like a Christian, not just for what one believed as a Catholic.

This debate over martyrdom held up Romero's canonization because regular saints need two miracles to be canonized, whereas martyrs need only one. Also contributing to the delay was the reluctance of the Vatican to canonize Romero while the Arena Party was still in power in El Salvador. The party was founded by Roberto D'Aubuisson, who orchestrated the killing of Romero.

The canonization of Romero should put to rest the war between the Vatican and liberation theologians in Latin America. The theologians, who were accused of being revolutionaries and communists during the last two papacies, saw Romero as their kind of bishop.

In his homily at the canonization Mass, Pope Francis described Jesus as "radical," because "he gives all and asks all." Jesus does not speak of "supply and demand" but rather proclaims a "story of love."

"Jesus," according to Francis, "changes the perspective: from commandments observed in order to obtain a reward, to a free and total love."

Francis believes both these men in different ways lived out lives of love, and that is why he declared them saints.