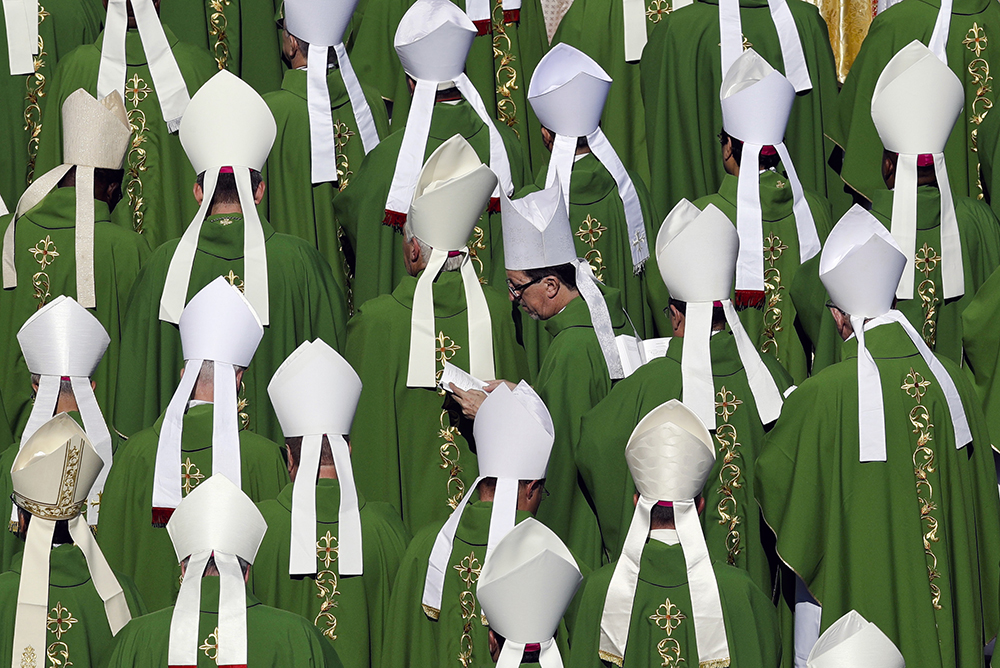 Bishops attend a Mass for the opening of a synod in St. Peter's Square, at the Vatican, on Oct. 3, 2018. (AP/Alessandra Tarantino)

It is time to stop using the term "Catholic Church" as a synonym for "Catholic hierarchy."

The word "church" has multiple meanings. One theologian counted more than a dozen different ways "church" was used in the documents of the Second Vatican Council, referring to everything from a building to the Mystical Body of Christ.

"Church" is the word we use to translate the Greek word "ekklesia," which originally had the meaning of an assembly called together by a secular authority.

In the New Testament, the term is used more than 100 times — to refer to Christians assembled for the Eucharist, to a local congregation (such as the church at Corinth) or to all the people of God united as a body with Christ as its head.

The leaders of the community were not "the church," but the apostles, bishops, presbyters and elders.

Today we do the same thing when we say, "Muslims are killing Christians."

Saying that the Catholic Church did not protect children is just as wrong. It was the bishops. It was the hierarchy.

We should not blame the the people of God for the sins of the hierarchy. In many other churches, the people have some say in selecting their leadership and therefore have some responsibility for their hierarchy's actions. Not so in the Catholic Church, where new leaders are chosen by current leaders.

If the hierarchy had been open with the laity about the sex abuse crisis, if the bishops had listened to the people, we would not be in the mess we are today.

Using the term "church" for "hierarchy" or "bishops" is sloppy writing, and I must plead guilty.

Confession is good for the soul and good for writing. I will probably fail again in the future, but we should always pause before using the word "church" to ask ourselves whether there is a better, more exact word we can use.