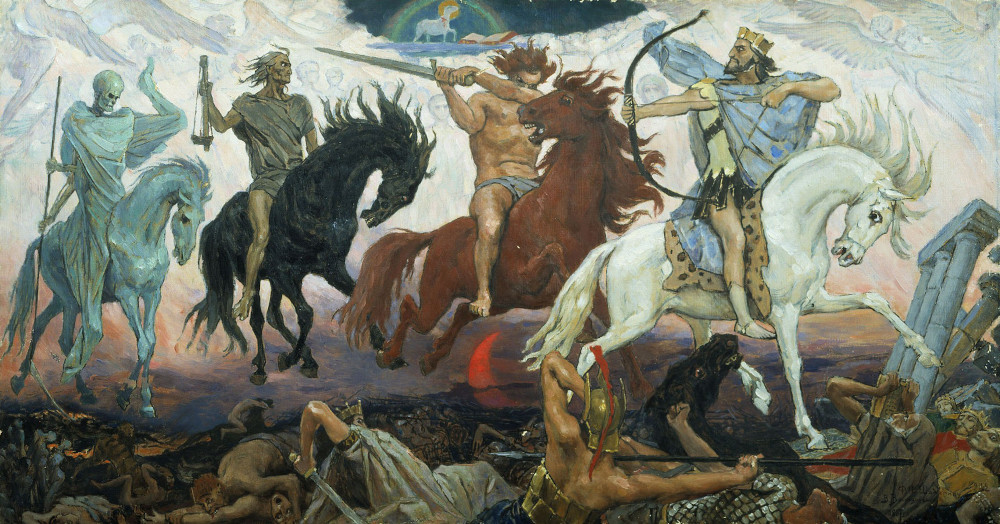 “Four Horsemen of the Apocalypse” by Viktor Vasnetsov, painted in 1887. Image courtesy of Creative Commons

After 14 days in quarantine, my Jesuit community in Washington, D.C., has been officially released from quarantine. We're happy and lucky that none of us caught COVID-19 from our brother who contracted it.

Then again, it's hard to take too much joy in being released before infections have even peaked in the United States. It feels like being released from jail into a war zone.

We went into quarantine when one of our members, the Rev. Steve Planning, tested positive for the coronavirus on March 14. He is still in isolation, but since we have been symptom-free and avoided contact with him for two weeks, we have been released. That means we can leave the house but must continue to keep social distance, wash hands, disinfect surfaces and practice all the other preventive measures recommended by public health experts.

We still must follow "stay at home" rules and social distancing like everyone else. Being released from quarantine does not mean that we won't catch COVID-19; it only means that we are not currently infected and therefore not a danger to anyone else.

We are in this disaster because our country failed to follow basic public health protocols. We failed to adequately test for the virus and trace down and quarantine those who had been in contact with anyone infected. If every early victim of the virus had been isolated like Steve, if everyone in contact with an infected person had been quarantined like us, our nation would not be in the situation we are today.

Since I work from home anyway, being quarantined was not all that bad. I do not see my life changing much in the next few weeks. I am going to continue self-quarantining.

Being quarantined is a minor place in purgatory compared with the hell of having the virus itself. Steve never got so bad that he needed hospitalization, but considering the hell he went through, I would hate to be someone who had to go to the hospital.

The coronavirus hell has multiple levels, some worse than others, just like Dante's Inferno.

The worst is for those who get so sick they have to be hospitalized. Their families and caregivers are put through the hell of trying to alleviate their suffering while trying to avoid infection. New York has shown us that hospitals can be overwhelmed and people can die.

What happened in New York is going to happen in most major cities. Ultimately it will spread to rural areas where there are few hospitals and doctors. 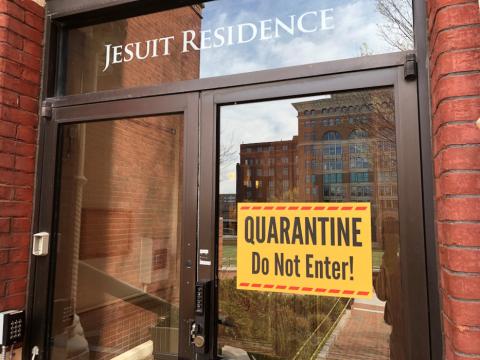 The Jesuit Residence on Eye Street NW in Washington, D.C., is under quarantine. (AP/RNS/Thomas Reese, SJ)

Then there is the hell of not being able to support your family because your employer laid you off because his business has been closed by the pandemic. Although Congress passed a rescue bill, it would be naïve to think that government is going to make everyone financially whole who has been hurt by the virus.

Those of us who are forced to work from home and are still getting a paycheck are only in purgatory by comparison. We must stay at home, keep social distance and wash our hands constantly, but that is minor compared with being crucified by the virus. Those of us who are healthy and still have food on our tables should thank God for our privilege.

The suffering of those who are sick has been excruciating. Too many have died already but it is going to get much worse. We must set our individualism aside and sacrifice for the common good. The death rate in the United States will be in the hundreds of thousands. And if the economy cannot be restarted in less than six months, we will have the greatest economic downturn since the Great Depression. Those who are vulnerable will suffer the most.

And as bad as things will be in the U.S., it will be much worse in poorer countries that do not have stable government structures or good health care. You cannot tell people without clean drinking water to wash their hands often. You cannot expect people in crowded housing, slums and refugee camps to practice social distancing. You cannot tell people without food for their children to stay home. If people are already living on the edge, the virus will easily push them over.

The 70 million refugees around the world are especially at risk. Those in camps will be decimated. Countries with populations that survive from day to day with nothing to spare will fall into chaos. The death toll will be in the millions.

The Four Horsemen of the Apocalypse are coming — Plague, Famine, War and Death — and we are not ready.

The United Nations and the pope have called on enemies to put down their arms and join in fighting a common foe that makes no distinction among races, religions or nationalities. It is also time to loosen sanctions against nations, even Iran, so they can get food and medical supplies for their people.

If there ever was a time for people of all nations to join forces to work together for the common good, it is now. Until the virus is under control everywhere in the world, no one is safe. "We are on the same boat, all of us fragile and disoriented," explained Pope Francis, "all of us called to row together, each of us in need of comforting the other."