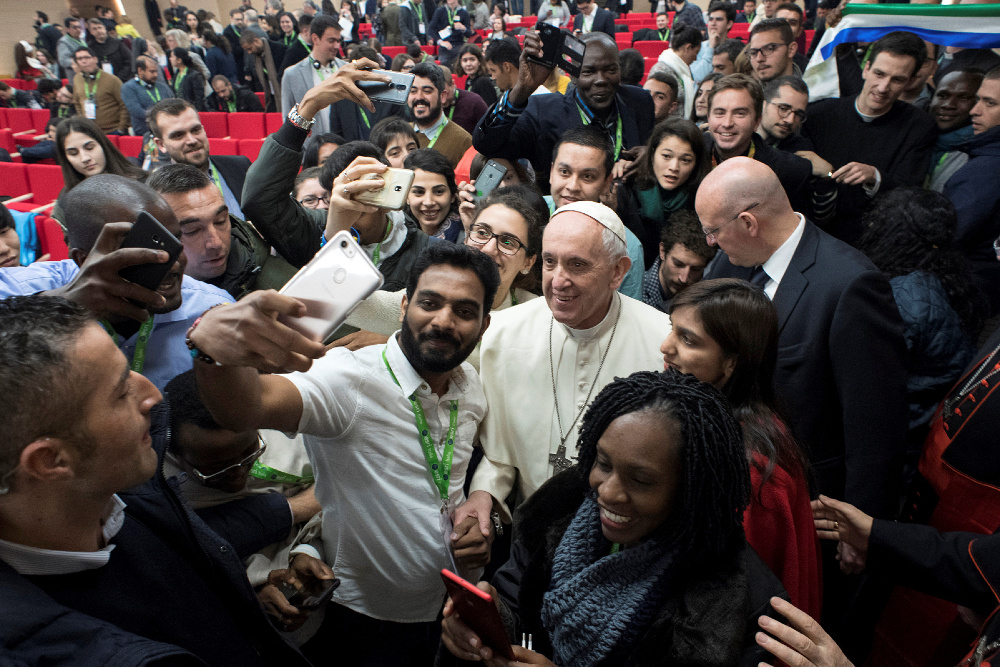 Pope Francis poses for a selfie during a pre-synod gathering of youth delegates at the Pontifical International Maria Mater Ecclesiae College in Rome March 19. The meeting was in preparation for the Synod of Bishops on young people, the faith and vocational discernment this October at the Vatican. (CNS/Vatican Media)

"Too often we talk about young people without asking what they think," said Pope Francis at the opening of a weeklong meeting with young people from all over the world.

In this meeting, the pope is practicing what he preaches by calling about 300 young people to Rome so he can listen to what they have to say. What they say will help prepare for the October synod where bishops from all over the world will meet in Rome to discuss "young people, the faith and vocational discernment."

The pope called their contribution to the synod process "indispensable."

"It is important that you speak openly," he told the young people. "I assure you that your contribution will be taken seriously."

This week's meeting is part of a larger listening process that included an extensive online questionnaire filled out by 100,500 young people. In his opening address, the pope shared some of the survey's responses.

"One girl," he said, "observed that young people lack points of reference and that no one encourages them to activate the resources they have." She asked the pope to "Help our youthful world that is increasingly falling apart."

The pope is listening to young people not only to hear about their problems but also because he wants to encourage them to come up with new solutions to these problems. He believes that young people should be protagonists of their own future.

The church must "dare new paths, even if it involves risks," he said. "We must risk, because love knows how to risk. Without risking, a young person ages, and the church also ages. That is why we need you young people, living stones of a church with a young face.

"A man or woman who does not risk does not mature," the pope told the attendees, who are all under 30 years of age.

At the opening meeting, the pope listened to testimonies from 10 young people, including Nick Lopez, director of campus ministry for the University of Dallas, who spoke in Spanish. He described the life of young people as a period of transition that involves "moving, choosing, experimenting, failing, succeeding, fearing and hoping that that next steps we make are the steps that God is calling us to make."

"The life of the young person is riddled with potential changes," he said. "The mere existence of these options is cause for great anxiety or stress in the hearts of our young people."

He described the situation in the United States where less than 15 percent of young Catholics attend Mass every week and a third of young people do not affiliate with any religion. He expressed concern for young people's views of marriage.

"Many of our youth are exposed to high divorce rates among their parents; and many young couples themselves, some only married for only a couple of years or less, are themselves divorcing," Lopez said.

"Signs point to a large amount of our young people today eventually having multiple marriages in their lifetimes, if they are to marry at all. Many now choose to skip marriage altogether, as cohabitation outside the bonds of marriage is quickly becoming the norm."

He does, however, see hope in the enthusiasm for international World Youth Days, where young Catholics from all over the world gather. He also sees "a generation of thoughtful and connected people, who seek to stand up for one another, regardless of differences in faith or nation. This spirit of activism exists among Catholic youth, inspiring them to advocate for the unborn through pro-life movements, as well as other causes."

At the same time, there are obstacles for young people in answering the Lord's call, according to Lopez.

"For some it is their hearts that have yet to be softened to hear God's voice," he said. "For others they believe the church is to blame, feeling that there is more of an emphasis given to discerning vocations to priestly and religious life, and less a call to holy marriage, or simply the call to holiness."

For some young people, the church can be the problem when it is seen as "too legalistic, and less focused on the complexity of their lives."

But Lopez concluded by affirming: "We are not here simply to discuss the struggles and needs of lives of our youth, we are here to affirm and proclaim the hope they represent (that we represent) to the church."