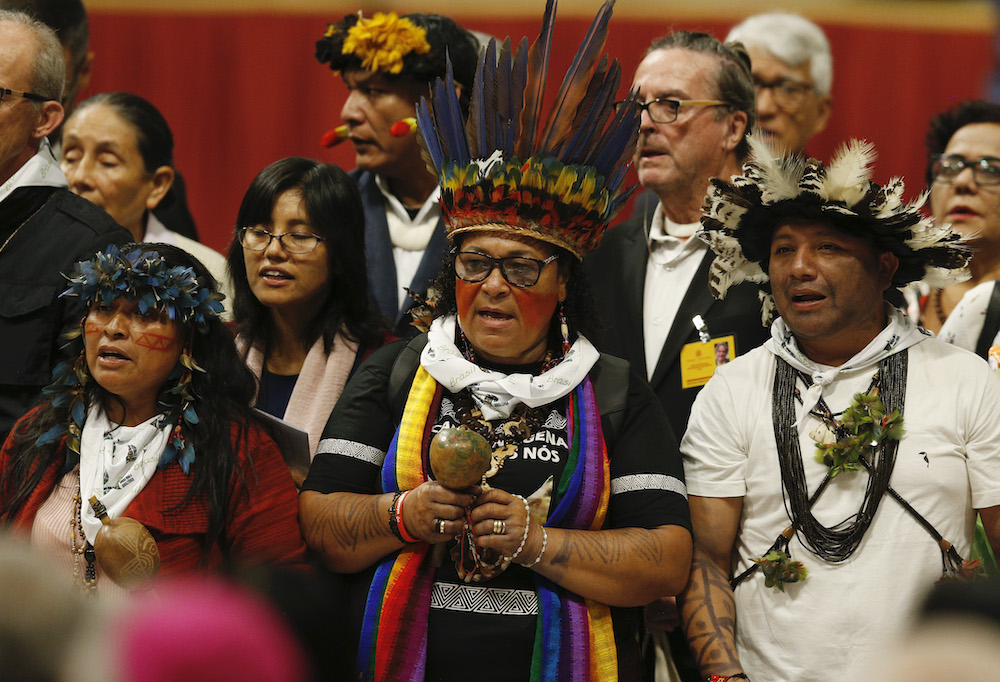 People participate in a prayer service in St. Peter's Basilica at the start of the first session of the Synod of Bishops for the Amazon at the Vatican Oct. 7, 2019. (CNS/Paul Haring)

While I am generally a fan of Pope Francis, I was bitterly disappointed that he side-stepped requests from the bishops' synod on the Amazon to ordain married men and consider opening the diaconate to the women who have anchored remote Amazonian communities for decades.

Both requests arose from a deeply felt pastoral need to respond to the eucharistic and sacramental famine afflicting 70% of Catholic communities in the Amazon.

Francis' passionate, poetic love for the Amazon and its peoples is richly displayed in the first three chapters of Querida Amazonia ("Beloved Amazon"), his apostolic exhortation and "response" to the "process of dialogue and discernment," which comprised last October's synod.

The pope specifically addresses the whole world, writing that he dreams of an Amazon that "fights for the rights of the poor," "preserves its cultural heritage" and guards "its overwhelming natural beauty." He courageously critiques "an exploitation that is leaving destruction and even death throughout our region … jeopardizing the lives of millions of people and especially the habitat of peasants and indigenous peoples."

He calls out members of the church who may "have been part of networks of corruption to the point of agreeing to keep silent in exchange of economic assistance for ecclesial works."

Quoting a recommendation from the Ecuadorian bishops with special applicability in the U.S., Francis asks that "special attention be paid to the provenance of donations or other kinds of benefits, as well as to investments made by ecclesiastical institutions or individual Christians."

One positive example is my own alma mater, Georgetown University, which recently promised to divest from fossil fuels over the next 10 years. I pray other Catholic institutions will quickly follow.

There is much good news for our world in Querida Amazonia.

But there is also not-so-good news, first for Amazonian Catholics and then for Catholics like me who long to return to the practice of the early church wherein women and men, married and celibate, ministered and celebrated the Eucharist with the people of God.

Since two-thirds of the bishops at the Amazon Synod recommended opening ordination to married men, one would reasonably expect Francis to have responded affirmatively, especially in light of his enthusiasm for synodality. But he did not directly mention married priests or women deacons in his exhortation Instead he "officially" presented the synod's final document, which addresses both issues — along with many others — in considerable depth.

At the press conference following the document's release, Cardinal Lorenzo Baldisseri, secretary general of the Synod of Bishops, clarified that while the final document has "a certain moral authority" it does not rise to the level of ordinary church teaching as does Francis' exhortation. Which is another way of saying no one is authorized to ordain married priests on the basis of the final document.

Still, in an interview with America, special secretary to the synod for the Amazon Cardinal Michael Czerny said the proposals remain on the table: "The church in the Amazon, and indeed the church everywhere, is welcome and invited to consider all of the proposals … the Querida Amazonia doesn't resolve or close any of the questions."

Which is all very confusing.

Also confusing is Francis' language about women. He acknowledges that priestless communities are being kept alive by "strong and generous women who, undoubtedly called and prompted by the Holy Spirit, baptized, catechized, prayed and acted as missionaries." Without citing evidence, he says ordaining women would somehow "clericalize" them and make "their indispensable contribution less effective."

One wonders if ordaining male deacons automatically makes their ministry less effective, too. (I am assuming here that "clericalize" means "making a cleric" rather than clericalism which Francis has criticized many times.).

It is apparent that Francis admires the unique dynamism of lay ministry. He advocates "public recognition and a commission from the bishop which would also allow women to have a real and effective impact on the organization, the most important decisions and the direction of communities, while continuing to do so in a way that reflects their womanhood."

Even though he is not a woman, Francis has a specific idea about what "womanhood" is meant to look like in the church. Unfortunately, his view is representative of the deeply entrenched error at the root of hierarchical exclusion of women from Holy Orders. In point 101 of the exhortation, he writes:

[God] chose to reveal his power and his love through two human faces: the face of his divine Son made man and the face of a creature, a woman, Mary. Women make their contribution to the Church in a way that is properly theirs, by making present the tender strength of Mary, the Mother.

In a press release, theologians associated with Voices of Faith explain the danger of this perspective. (I give the most obvious one here, but their full statement is well worth the read.)

The theology behind this phrase is dangerous because it serves to exclude women from access to the full means of salvation. For there is an important difference between Jesus and Mary — even though they are both human, Jesus is also God. The basis of the Christian faith is the conviction that Christ adopted human nature inclusively, not male nature exclusively, and that thanks to this, every human being can be saved and is indeed divinized in Christ.

So, if women are only being compared to the likeness of Mary, then why are women baptized in the name of Christ? 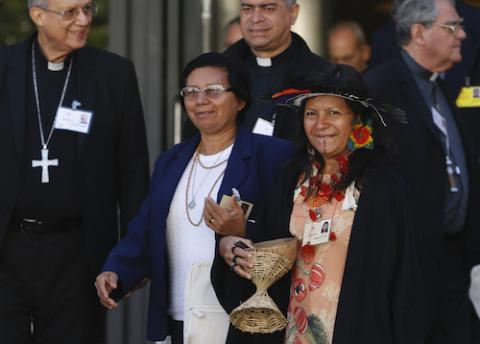 Leah Rose Casimero, an indigenous representative from Guyana, leaves the first session of the Synod of Bishops for the Amazon at the Vatican Oct. 7, 2019. (CNS/Paul Haring)

I admire Francis and believe him to be a holy man. I suspect his insightful papal biographer, Austen Ivereigh, may be on to something when he writes "this is a Pope who takes seriously government of the Church by discernment. And who will follow the Spirit when it blows where it wills."

Given Francis' apparent view that "womanhood" is not suited for Holy Orders, his synod response may actually be a better fit for the unique character of the Amazonian church where most Catholic communities are run by lay people, 60% of whom are women. It would be quite disruptive to introduce newly ordained married men in communities that have been led by women for decades.

In light of this reality and of opposition from both moderate and traditionalist prelates — some of whom were not at the synod — Francis apparently chose to avoid further polarization and did not address either married priests or women deacons.

In so doing, it is hard to discount critiques that Francis privileged the views of Eurocentric prelates over those of his brother bishops in the Amazon.

Francis freely acknowledges his own high regard for the celibate priesthood, and on Feb. 11 told U.S. bishops that he "didn't actually believe in the ordination of married men" and did not expect to move on the issues, "because I haven't sensed that the Holy Spirit is at work in that right now."

How many women and married men were able share their own profound experiences of the Spirit's call to ordination?

I'm compelled to wonder if our hierarchical leaders have so little trust in the Spirit that they believe the celibate charism will disappear if we allow married people to embrace their priestly calls.

While I believe Francis is a man open to the Spirit, his discernment pool is too small.

Russ Petrus has it right in FutureChurch's press release:

The problem isn't a shortage of vocations, but an entrenched resistance to the movement of the Holy Spirit in recognizing and lifting up the vocations of women and married men that are already present.

The Spirit blows where s/he will. Let us have confidence that, as in the healing of the deaf man (Mark 7:31-37), Jesus' own Spirit will soon open the ears of our bishops: