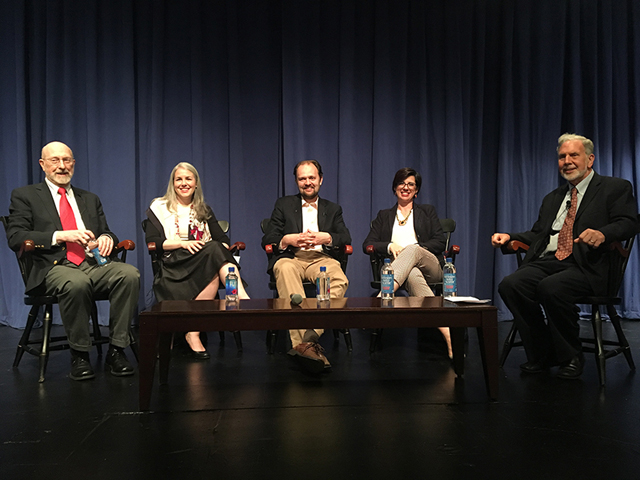 That's always been the jokey answer to a dumb question, but it's now a serious issue for Catholic intellectuals who have been criticizing, and defending, the Catholic bona fides of Pope Francis, especially since the pontiff released a landmark document on family life earlier this month that some say calls into question the church's teachings on the permanence of marriage.

"A catastrophe," one traditionalist blogger called the apostolic exhortation, "Amoris Laetitia," or "The Joy of Love," which was released by the Vatican on April 8. Francis "departs from church teaching" in the exhortation, wrote another.

"Suddenly the rhetorical question, 'Is the pope Catholic?' doesn't seem so rhetorical anymore," Claire Chretien wrote in a pointed critique at the conservative Web outlet The Federalist.

The unusual debate -- after all, it's not often that a pope is accused of heterodoxy -- has grown so serious, in fact, that on April 19, the Jesuit-run Fordham University hosted a panel of Catholic experts titled: "Is the Pope Catholic?"

Among the four participants was New York Times columnist Ross Douthat, who has been one of Francis' leading critics on the Catholic right, openly wondering about the pontiff's doctrinal purity and whether he is leading the Catholic Church into schism.

While none of the panelists directly challenged Francis' faith, Douthat was most outspoken in criticizing Francis' approach in general, and in "Amoris Laetitia" specifically, a document that Douthat said was "designed to introduce a level of ambiguity into church teaching that had been absent."

"It's clearly a deliberately destabilizing document. And whether that destabilization is good or bad is something that liberals and conservatives can argue about," he said.

But he added that did not change what Steinfels said was his basic pessimism about the future of the church, at least in North America.

Alwin, on the other hand, said she was much more positive about the kind of effect Francis has had, especially on the children she deals with.

She described herself as "joy-filled" about this papacy and the more merciful aspect of the faith that, whatever the doctrinal disputes, she says is having an impact on the next generation.

Imperatori-Lee was also relatively upbeat -- at one point she noted to laughter that it was odd the two women were more hopeful about the future of Catholicism than the three men -- and she said it was important to see the exhortation as "a global document" and not just about U.S. concerns.

She also noted that Francis also spoke in very supportive terms about feminism, in contrast with other church leaders. "I enjoyed that line," she said.

But Douthat was steadfast that the contemporary Catholic Church is not at all rules-obsessed and harsh and in need of a transfusion of mercy, as Francis and his supporters suggest. On the contrary, he said, he sees no signs of such conservatism -- and he acknowledged that conservative Catholicism is "divided and confused" and "has no clear answers" to the crisis.

"But the idea that there is this glorious future church waiting to be born as long as we get rid of the dead hand of 1950s Catholicism that the pope seems to perceive everywhere he looks is nuts! It's just nuts. That's not where Catholicism in the West is right now," he said.

"Catholicism in the West is divided, disorderly, badly catechized and extremely liberal in terms of the perspective of the average self-identified Catholic."

What Douthat and the panelists seemed to agree on was that change, or "development," as theologians like to put it, does happen in church -- a fact that traditionalists do not often like to recognize -- but that the real debate is about how change happens, and what can change and what is essential.

"I think that where we agree is that the church, rather than having a desire to be liked, expresses in the world God's desire to save, however that happens," said Imperatori-Lee. "If the church is not doing the work of salvation, then it is a failure.

"Insofar as the church does the work of salvation, then it succeeds. What we keep should be at the service of salvation for the most number of people at any given point in history. And what we discard should be anything that is an impediment to that will to save."

In the end, then, it seemed that the question was not so much whether the pope is Catholic, but what Catholicism is.