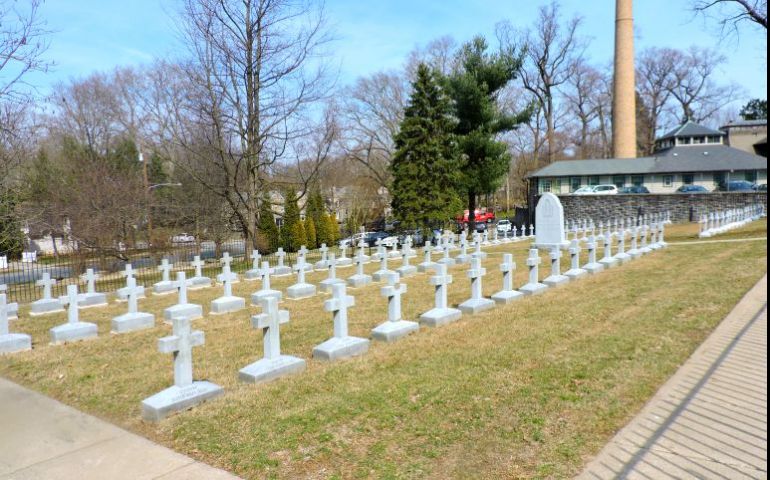 The cemetery at the Convent of Mercy in Merion, Pennsylvania, where sisters associated with the community are buried (Elizabeth Eisenstadt Evans)

Editor's note: The declining numbers of Catholic sisters in America will come as no surprise to GSR readers. But every loss is significant in itself. In Part 1 of "A Good Death," a two-day series, we ask sisters how their communities address the death of a member. The second story, coming Thursday, profiles two sisters who face the possibility of death as a daily reality.

When Rose Pacatte, who is a Daughter of St. Paul, gets on an airplane wearing her habit, "people think, 'We will be great,' " she said, suggesting that passengers think having a sister aboard may be a guarantee of a safe arrival. "Don't be too sure," she tells them. "When the time comes, it's our time," she added, recalling one instance in which she took out her rosary while in flight, and a woman asked her, "Are you serious?"

In her matter-of-fact approach, confidence in a divine plan and puckish but down-to-earth sense of humor, Pacatte resembles the other sisters interviewed for this story — not longing to slip the bonds of Earth permanently but ready for any eventuality.

"It's not something we fear. Dying well is just part of our lives," says the nun, the founding director of the Pauline Center for Media Studies in Los Angeles.

That's a realistic approach, both for individuals and for communities.

Given that 77 percent of women religious are older than 70, and approximately 300 of the 420 religious institutes in the United States are in their last decades of life, decline and death are realities that communities have been, and will be, confronting for decades.

Some groups of women religious encourage sisters to plan their own funerals, down to the prayers and the hymns that they want included. Others take a more communal approach, enlisting friends and family members in planning the event.

Some are buried in convent cemeteries, others in Catholic ones. Some choose an ecologically sensitive green burial or to be cremated.

But interviews with sisters in a variety of communities suggest that many bring a bracingly practical, even matter-of-fact approach to preparing for the inevitable.