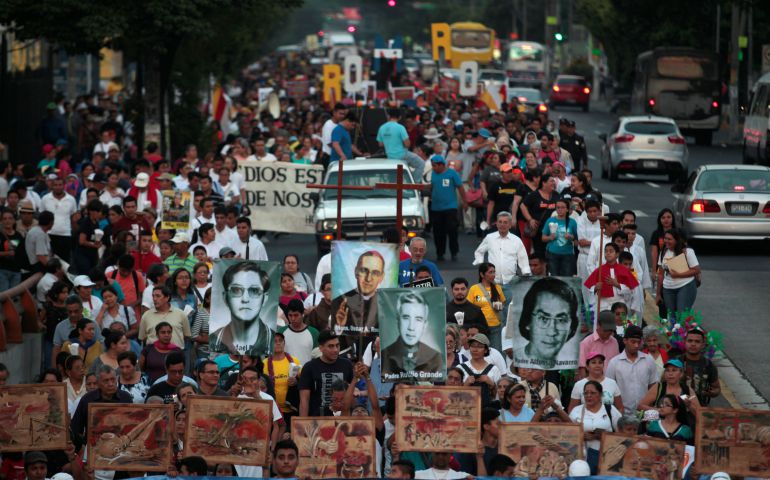 People carry images and banners during a March 26 procession in San Salvador, El Salvador, to commemorate the 37th anniversary of the murder of Blessed Oscar Romero, who was shot and killed March 24, 1980, as he celebrated Mass. (CNS photo/Jose Cabezas, Reuters)

At first glance, the reopening in El Salvador of the investigation into the 1980 assassination of Archbishop Óscar Romero seems hopelessly problematic, at least in terms of prosecutions. Roberto D'Aubuisson, the mastermind of the crime, is dead, and most of the other accomplices and witnesses have died or been killed.

The only one ever charged, Capt. Alvaro Saravia, D'Aubuisson's security chief, is a relatively minor player reportedly in hiding in another country.

And going after those who allegedly financed the operation, wealthy landowners, would require not only massive resources but also huge political capital.

The Romero case could be the most difficult of the era's killings to successfully investigate "because it goes to the pillars of Salvadoran society," said Matt Eisenbrandt, a human rights lawyer and author of Assassination of a Saint: The Plot to Murder Óscar Romero and the Quest to Bring His Killers To Justice.

While he's "very cautiously optimistic" about the case, Eisenbrandt said prosecutors would have to "look in detail at D'Aubuisson's death squad, and looking into that death squad means looking into powerful figures who supported D'Aubuisson. Most of the other cases implicate top military commanders, which will be difficult enough, but I would expect that even that would be 'easier' than seriously investigating members of the oligarchy."

The reopening of the case by Judge Rigoberto Chicas May 18 in the wake of the Salvadoran Supreme Court's revoking the amnesty law, however, could have consequences unrelated to whether anyone is convicted of the assassination.

For one, it could impact the powerful right-wing party, the Nationalist Republican Alliance (ARENA), founded by D'Aubuisson. The U.N. Truth Commission named him as the mastermind behind the assassination, and if Salvadoran court proceedings established his culpability, it would more forcefully countermand ARENA's longtime contention that D'Aubuisson was not to blame.

It was ARENA that pushed through the amnesty law in 1993 just days after the U.N. Truth Commission found that the Salvadoran military, along with its affiliated death squads, had committed 85 percent of the atrocities during the country's 12-year civil war, which claimed more than 75,000 lives. Last year, the Salvadoran Supreme Court struck down the law, enabling victims to seek reparations and the government to prosecute atrocities committed during the war.

Reopening the Romero case also has the potential of paving the way for the highly polarized country to confront its past, joining the ranks of countries like Chile, Guatemala and Peru that abolished amnesty laws and prosecuted high-ranking war criminals.

"The Romero case is unlikely to have a live defendant, but it has extraordinary symbolic power," Stanford University Professor Terry Lynn Karl said.

"It involves an archbishop, who's about to become a saint, and the founder of the ARENA party," said Karl, who's been an expert witness in a number of human rights and war crimes trials, including a 2004 civil trial of Saravia, filed by the Center for Justice and Accountability.

Saravia never showed up for that trial and today is reportedly hiding in some Latin American country, according to El Faro, an online Salvadoran newspaper that interviewed him in depth.

"A trial of Capt. Saravia in absentia," Karl said, "is not the same thing as the trial of [Guatemalan dictator] Efraín Ríos Montt or [Chilean dictator] Augusto Pinochet, both of whom sat in the courtroom," said Karl. "It just doesn't have the same magnitude, the same power.

"But because it's Romero, the case could have an effect," she said, even if it doesn't produce new evidence. "There's a concept called 'a justice cascade' where you start with a trickle here, a trickle there; the trickles become a stream, and the stream gets bigger. That's the story of Chile."

"To the extent this happens in El Salvador, the Romero case could be significant," she said, "But there are very powerful forces there that don't want to see that happen.

"Justice cannot mean scapegoating or finding the lowest level guy you can blame. It means upholding the notion that nobody is above the law. It means finding out where the orders came from, having a live defendant from the High Command in the courtroom charged with murder, crimes against humanity — defendants who have never had to account for their actions."

Since the amnesty law was struck down in 2016, hundreds of cases have been filed in Salvadoran courts, but few have been reopened.

"It's extremely important" that these cases be reopened, said international human rights attorney Almudena Bernabeu, a lead attorney on Center for Justice and Accountability's 2004 Saravia case.

"And it's mandatory that the cases that take priority are the cases where victims, evidence and perpetrators can be subject to justice," Bernabeu said. "I would hate to see that the only cases that are reopened are cases that are well-known but impossible to further investigate or litigate."

The Romero case, however, takes on additional significance as it was his murder that marked not only the beginning of the civil war, but the unleashing of a decade of state terror, which included the murders of four U.S. churchwomen and large massacres like those at Rio Sumpul and El Mozote, where more than 1,000 villagers, more than 250 of them children, were systematically executed by U.S.-trained troops.

The 2004 Saravia court case, for which Bernabeu and Eisenbrandt traveled to El Salvador to find and interview witnesses, remains the best legal record to date of the Romero assassination.

The suit, which accuses Saravia of procuring the weapon and vehicle for the murder, was filed on behalf of one of Romero's brothers after it was learned that Saravia had been living for years in Modesto, California. The federal judge ordered Saravia to pay compensation and declared that the assassination was a crime against humanity.

While the evidence and testimony from that case will certainly help Salvadoran prosecutors, many of the witnesses are now dead, including Robert White, U.S. Ambassador to El Salvador at the time of the assassination, and lawyer María Julia Hernández, who worked with Romero and headed his legal aid office, Tutela Legal, which documented atrocities and human rights abuses.

Hernández, who was the first person to interview the only survivor of the El Mozote massacre, testified that the National Police seized all the files connected to Romero's assassination, crippling any investigation.

In his testimony, White stated that D'Aubuisson was responsible for orchestrating Romero's death, that the death squads were operated primarily by the military, and that the U.S. State Department had a significant amount of evidence linking the top Salvadoran military command to D'Aubuisson.

The message, White said, was that there would be no democratic change, and that no one was sacred; that if you can kill an archbishop, you can kill anybody.

"By releasing the people he believed killed the archbishop," said Karl, "García sent a signal, a green light to mass murder and state terror. It meant no one was going to be held accountable for terror, and that set off the big rural massacres, where they would go into villages and kill everyone in sight, culminating in the massacre at El Mozote."

However, the Carter administration had already sent a message similar to García's when it began pushing a Salvadoran aid package through U.S. Congress just days after the archbishop's assassination.

Romero, a critic of U.S. military and financial support, had publicly challenged President Jimmy Carter in a letter just weeks before his murder, asking him not to send any more aid.

The U.S. government would go on to pump more than $4 billion into El Salvador during the war and to train thousands of its officers at the U.S. Army School of the Americas, now the Western Hemisphere Institute for Security Cooperation. The school had trained both García and D'Aubuisson and scores of officers linked to every major atrocity documented in the U.N. report.

Also, the CIA in 1975 had helped the SOA-trained Bolivian dictator Hugo Banzer devise what became known as the Banzer Plan, a plan for targeting progressive clergy adopted by 10 Latin American governments.

"The success of the Banzer Plan was vividly demonstrated in San Salvador in the late 1970s, when an anonymous group distributed a leaflet that read: 'Be a Patriot! Kill a Priest!' wrote Martin A. Lee, co-founder of the media watch group, Fairness and Accuracy in Reporting, in a 1983 article for Mother Jones. "A series of clerical assassinations followed, culminating in the murder of the progressive and popular Archbishop Óscar Arnulfo Romero."

In a closed-door meeting, D'Aubuisson informed Mena Sandoval and other officers, including the head of the National Guard, about "One by One," his secret death squad operation to kill priests. The first one murdered, in March 1977, was Jesuit Fr. Rutilio Grande, a close friend of Romero's. Sandoval said D'Aubuisson had a list of "dogs" — the priests he wanted targeted, including Romero — and pronounced that "Once the dog is dead, we won't have to worry about rabies."

A number of priests were killed after Grande, including Fr. Octavio Ortiz Luna in January of 1979, whose murder particularly devastated Romero. Ortiz Luna was the first priest Romero had ordained, and the military had crushed him to death with a tank, making him unrecognizable.

It remains to be seen whether the U.S. role will play into the prosecutions of war crimes, as they did in 2000 when García was taken to court in Florida for the churchwomen's murders and claimed he had only been doing what the United States wanted.

However, Eisenbrandt said he remains "very cautiously optimistic" that members of the oligarchy won't remain untouchable, although the issue of death-squad financing would add layers of complexity. "But in Guatemala, I don't think many people expected Rios Montt to get prosecuted for genocide, but then suddenly it happened."

Even if the reopening of Romero's case fails to end in prosecutions, his legacy — his homilies which reported on atrocities, his radio transmissions and his creation of the legal aid office that documented war crimes — may bring about prosecutions in other cases.

"He created the reporting mechanisms on human rights abuses,'' Karl said, "that make prosecutions possible. Without them, we wouldn't have any cases." With them, she said, thousands of deaths can be linked to the perpetrators simply because the mechanisms he set up "survived after his death."

A version of this story appeared in the June 16-29, 2017 print issue under the headline: Romero case reopened.