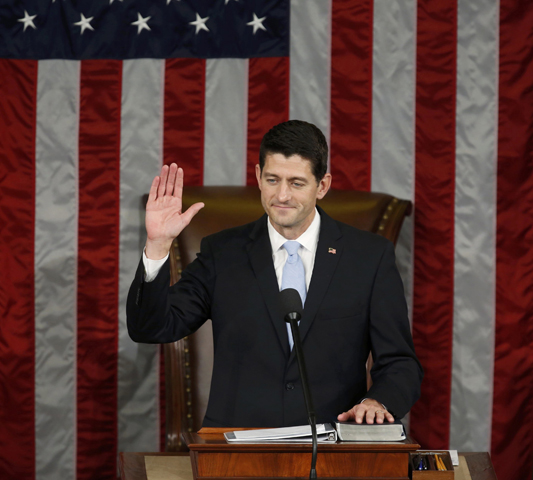 Newly elected Speaker of the U.S. House of Representatives Paul Ryan, R-Wis., raises his hand and places the other on a Bible as he is sworn in on Capitol Hill in Washington Oct. 29. He succeeds outgoing speaker, Rep. John Boehner, R-Ohio. (CNS/Gary Cameron, Reuters)

As Paul Ryan settles into his new perch as the most visible leader on Capitol Hill, all eyes are on a politician who has been unusually candid about the way his Catholic faith influences his policy proposals and philosophy of government. If many elected officials speak in vague, generically safe terms about faith and values, Ryan dives head first into the minutiae of Catholic teaching, trades letters about budget policy with Cardinal Timothy Dolan of New York and finds himself sparring with theologians.

The Wisconsin congressman and then House budget chairman made a case for smaller government and defended cuts to social welfare programs in specifically Catholic terms during a 2012 speech at Georgetown University. In particular, he cited the church's teaching on "subsidiarity" as a way of explaining his positions.

"Our budget offers a better path, consistent with the timeless principles of our nation's founding and, frankly, consistent with how I understand my Catholic faith," Ryan said. "We put our trust in people, not in government. Our budget incorporates subsidiarity by returning power to individuals, to families, and to communities."

More than 90 Catholic theologians and scholars at the Jesuit university argued Ryan was "profoundly misreading church teaching" and distorting Catholic social doctrine to fit his political agenda. "We would be remiss in our duty to you and our students if we did not challenge your continuing misuse of Catholic teaching to defend a budget plan that decimates food programs for struggling families, radically weakens protections for the elderly and sick, and gives more tax breaks to the wealthiest few," they wrote. "Subsidiarity is not a free pass to dismantle government programs and abandon the poor to their own devices." His Georgetown critics also called out Ryan's infatuation with a libertarian icon.

"In short, your budget appears to reflect the values of your favorite philosopher, Ayn Rand, rather than the Gospel of Jesus Christ. Her call to selfishness and her antagonism toward religion are antithetical to the Gospel values of compassion and love." While Ryan not long ago cited Rand as an intellectual hero who inspired him to enter politics, he has since distanced himself from the atheist philosopher. "If somebody is going to paste a person's view on epistemology to me, then give me Thomas Aquinas," Ryan told the National Review, referencing the 13th century Dominican friar and giant of Catholic theology. "Don't give me Ayn Rand."

Ryan's center-left Catholic critics in academia and social justice circles have been harder on him than members of the church hierarchy. But his relationship with Catholic bishops is also complicated. When the bishop chairing the U.S. Conference of Catholic Bishops' domestic justice and human development committee said the GOP budget Ryan spearheaded failed to meet a basic moral test -- and described cuts to programs that fell heavily on children and other vulnerable populations as "unjust and wrong" -- Ryan curtly dismissed those concerns as not reflective of all church leaders. He found a friendlier ally.

Cardinal Timothy Dolan of New York, who grew close to Ryan when he was archbishop of Milwaukee, called him a "great public servant" with an "obvious solicitude for the poor." In an exchange of letters about Ryan's budget proposals, the cardinal praised him for his "continued attention to the guidance of Catholic social justice." Dolan never endorsed the Ryan budget, but his encouraging tone was helpful to the congressman and then Speaker John Boehner, a fellow Catholic, who gave public statements showcasing the cardinal's letter as something of an ecclesiastical seal of approval.

In his diocesan newspaper, Bishop Robert Morlino of Madison, Wisconsin, an archconservative who has embraced the culture wars, said he was "proud" of Ryan's accomplishments "as a native son and a brother in faith." The congressman's budget positions, he said, dealt with issues that Catholics of goodwill could disagree over because they simply involved matters of prudential judgment. In contrast, Bishop Morlino listed what he called "some of the most fundamental issues for the formation of a Catholic conscience" as "the sacredness of human life from conception to natural death, marriage, religious freedom and the formation of conscience, and a right to private property." The bishop compared decisions involved in "how best to care for the poor," with black-and-white "intrinsic evils" that include "abortion, euthanasia and physician-assisted suicide, same-sex marriage, government-coerced secularism, and socialism."  At a time when Ryan was the vice presidential candidate, it was a politically useful if theologically questionable argument.

A "Francis Effect" on Speaker Ryan?

Pope Francis is shifting the contours of values debates in politics by putting more of the church's institutional muscle behind its teachings on poverty, inequality and environmental justice. This is especially relevant in the United States, where the Catholic narrative in public life in recent years has been narrowly framed around a handful of hot-button social issues.

Prominent Catholic Republicans like Paul Ryan now face the tricky two-step of cozying up to a wildly popular pope even as their policy positions on the economy and climate change clash with the pope's priorities. In the years after his failed White House bid, Ryan has tried to scale back his rhetoric. Ryan once divided up Americans into "makers" and "takers." He described government assistance for the poor as a "hammock that lulls able-bodied people to lives of dependency and complacency." These days the tone is softer but policy experts and budget analysts point out his proposals are basically the same.

"I love this pope," Ryan has gushed. "What he's trying to do is he's trying to invite lay Catholics into public policy, into a debate. He's not trying to settle the debate." Ryan has a more condescending response to a pope who blasts "trickle-down" theories as "naïve" and denounces "an economy of exclusion and inequality."

Speaker Ryan faces the unenviable job of trying to patch together a bitterly divided House that reflects a Republican party fighting a civil war between establishment leaders and insurgents. Worrying about the Catholic politics that swirl around him may be the least of his concerns.

Then again, maybe a leader who views himself as a reform conservative can find inspiration from a reformer pope who is fighting his own daunting political battles inside the Vatican.

[John Gehring is Catholic program director at Faith in Public Life. He is the author of The Francis Effect: A Radical Pope's Challenge to the American Catholic Church. Follow him on Twitter @gehringdc]